Most of the information below on how to substitute milk for dairy-free diets is excerpted from my book, Go Dairy Free: The Guide and Cookbook. However, I’ve also added product reviews and a few fun recipes that are here on the website. 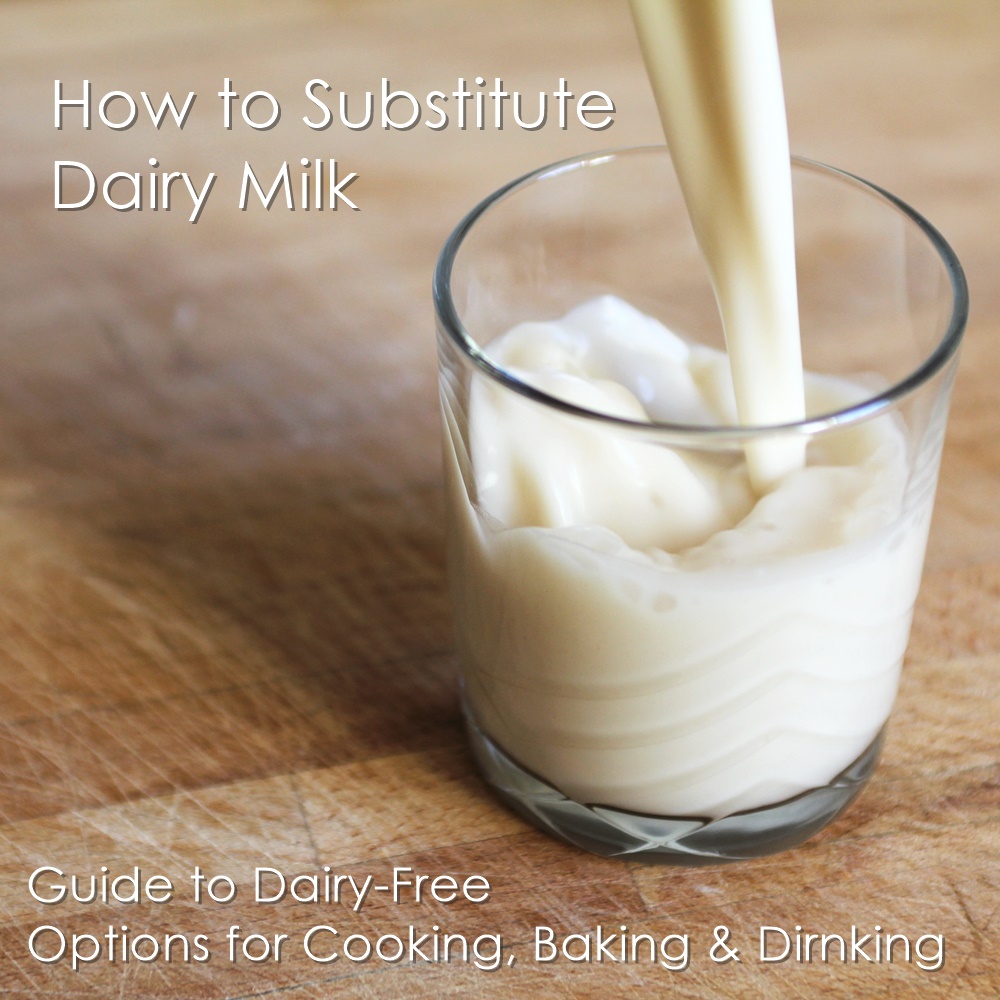 The selection of non-dairy milk options has exploded in recent years. Below is a rundown of the choices to substitute milk, their flavor profiles, and best uses …

Almond Milk Alternative: The base of almond milk is typically made from ground almonds, filtered water, and a small amount of sweetener (i.e. brown rice syrup), though you can easily find unsweetened varieties.

Almond milk can best be described as a lightly sweet non-dairy beverage with a delicate almond flavor. The nutty flavor in almond milk can be a plus in various desserts. It has become my personal favorite for smoothies. However, almond milk is best left to sweet dishes, as even the unsweetened varieties can make some savory dishes taste slightly off.

Coconut Milk Beverage: Not to be mistaken with regular or light coconut milk (which are sold in cans), coconut milk beverage is sold in cartons like other milk alternatives, and is relatively light. It does have a hint of coconut flavor, but still works well in sweet recipes, on cereal, or in savory dishes where the flavor blends well, such as Asian entrees or salad dressings with sharp flavors.

Soymilk: This is the classic, the originaly milk alternative. It has been around so long that “soymilk” is a recognized word (versus having to put “milk alternative or beverage” after the name). It does have a distinct but mild “beany” taste that some people love and others loathe.

Nonetheless, soymilk is still considered one of the most versatile milk alternatives. It is slightly heftier in protein and fat than most milk alternatives, making it a good option to substitute milk in savory sauces and in baked goods. It can pretty much be a stand-in for milk in most recipes, but keep that “beany” profile in mind. Soymilk could overpower a delicately-flavored recipe.

Rice Milk Alternative: When soy allergies and milk and soy protein intolerance (MSPI) emerged as concerns, rice milk popped onto the market as another way to substitute milk. Many moms say that rice milk is the most loved by kids. Like soymilk, it is highly versatile and can be used in most recipes, both sweet and savory. Where rice milk falls short is in its heft. It is very light and sometimes a touch watery, so it won’t add much richness to sauces or ice creams. However, unlike soymilk, it works quite well in more delicate dessert recipes that don’t require a lot of fat.

Oat Milk Alternative: Oat milk is more popular in Europe than in Northa America, but I have no idea why, it’s great! Since the only brand in the U.S. is sweetened (good, but sweetened), I prefer to make oat milk at home (see the oat milk recipe in the section below). Oat milk has a nice earthy taste that isn’t too bitter or too sweet. It is great in smoothies, with cereal or granola, and works well in baked goods. I also think it is a good option for savory recipes and some sweets, but oat milk may be a little too earthy for say, a light white sauce or creme brulee.

Hemp Milk Alternative: Hemp milk has fought a few uphill battles. Obviously, regulations on hemp are a primary issue, which is why all brands of hemp milk come from Canadian companies. But hemp also has a strong taste that can be a bit too powerful in milk alternatives at times. Some hemp companies have mellowed out that flavor with sweeteners and certain processing techniques. Like soymilk, some love the flavor while others find it a bit, well, skunky. Still, hemp milk is a great allergen-free milk alternative that is worth trialing – I’d just avoid using it in delicately-flavored recipes.

Flax Milk Alternative: This darling has some huge potential for its ability to truly substitute milk. One reporter did a blind taste-test of milk alternatives with milk drinkers. Flax milk was the resounding winner. It was enjoyed by all and had a taste and consistency that was voted as closest to “the real stuff.”

I’ve enjoyed it myself and have to admit that it is pretty seamless. The fluidity is spot on, and it has just enough fat to impart milky richness without being too thick. The flavor is also quite mild. It should work well in almost any recipe that calls for milk, whether sweet, savory, earthy, or delicate.

Notes: There are a few more types of milk alternatives on the market, including sunflower and grain. As they grow in popularity, I will report back. In the mean time, for a full listing of the types and brands, see the No Dairy Product Lists.

All of the above can be used to substitute milk in a 1:1 ratio for skim or low-fat milk, whether used raw, when cooking, or in baking … with a few exceptions. Things like instant pudding won’t set-up nicely with most milk alternatives. See p.169 in Go Dairy Free for several easy methods to make delicious instant pudding.

Also, if using a milk alternative in savory dishes, purchase the “unsweetened” variety. Original, vanilla, and other milk alternative flavors will often have sweetener added, which could throw off your dish.

For many recipes, any of the low-fat / non-fat milk substitute options will work well as a substitute for whole milk, too. However, I prefer to use the following non-dairy milk choices when the recipe or my tastes require something with a touch of richness …

Coconut Milk Beverage: This is one of the richest commerically available milk alternatives, containing 5 grams of fat per 1 cup serving, just a bit below the 8 grams of fat in 1 cup of whole milk.

Keep in mind, canned light coconut milk has more of a coconut flare than coconut milk beverage, and may impart a coconut vibe on your recipe. This usually works well in many dessert recipes, and in Asian-inspired savory dishes, but may need to be masked by other flavors in recipes such as a linguine alfredo.

Canned light coconut milk is shelf-stable and typically sold in the Asian section of most grocers. Do not confuse it with coconut milk beverage (sold by the quart or half-gallon in aseptic packages or refrigerated cartons), which is lighter in fat, coconut taste, and texture, and may be sweetened.

Products: Milk Alternatives at the Store

Below are the products we’ve had a chance to taste-test and review here on Go Dairy Free. For a more extensive list of non-dairy milk options available, get one of our No Dairy Product Lists; they include thousands of dairy-free foods.

The number of milk alternatives currently on the market is phenomenal, and the list seems to be growing by the day.  You can now enjoy delicious creamy soups and sauces as well as rich desserts made from rice, soy, oat, almond, coconut, sunflower, or even flax “milks”.  With this in mind, I have a few general tips and bits of information to offer before you head off on your dairy-free shopping spree to substitute milk: