After a hot day at the beach, nothing sounds better than a scoop or swirl of dairy-free ice cream. Luckily, there are several hidden spots on Oahu, in the tourist areas and beyond, where you can order vegan flavors. We have a very extensive Dairy-Free Oahu Guide for restaurants and shops, but the post below focuses specifically on the best creamy ice cream, gelato, and wonderful local soft serve! And it’s just been updated for you to enjoy … 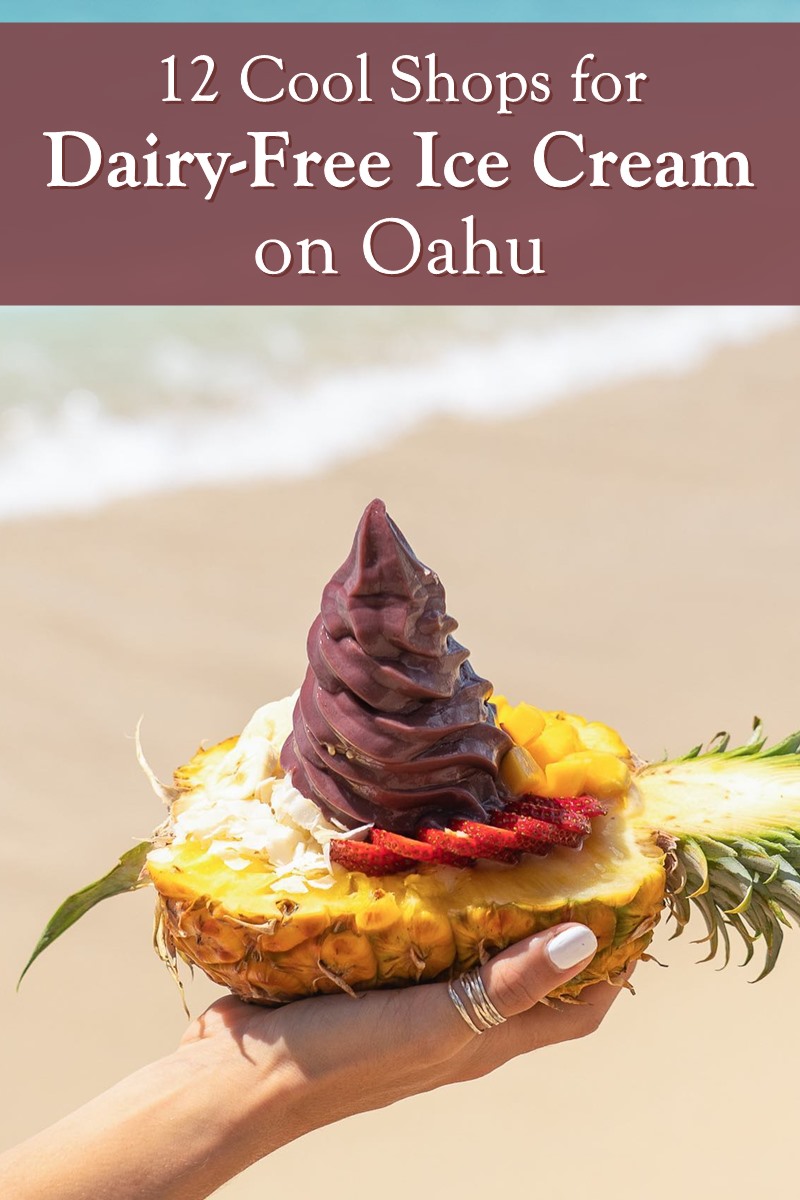 12 Cool Spots to Get Dairy-Free Ice Cream on Oahu

Not every shop on Oahu caters to special diet needs, but these wonderful shops and stands serve delicious vegan frozen desserts. Technically, this list contains more than a dozen. I’ve buffered it with a couple extra since this has been a wild time. We’ve seen some long term ice creameries close over the past year and a half. Fortunately, new ones seem to be popping up!

This is a dairy-free, plant-based soft serve ice cream shop! They create wonderful tropical flavors like hibiscus, coconut, Thai tea, ube, and mango, which you can order in a cup or cone. They also offer toppings, like chocolate sauce, dairy-free whip, and more. 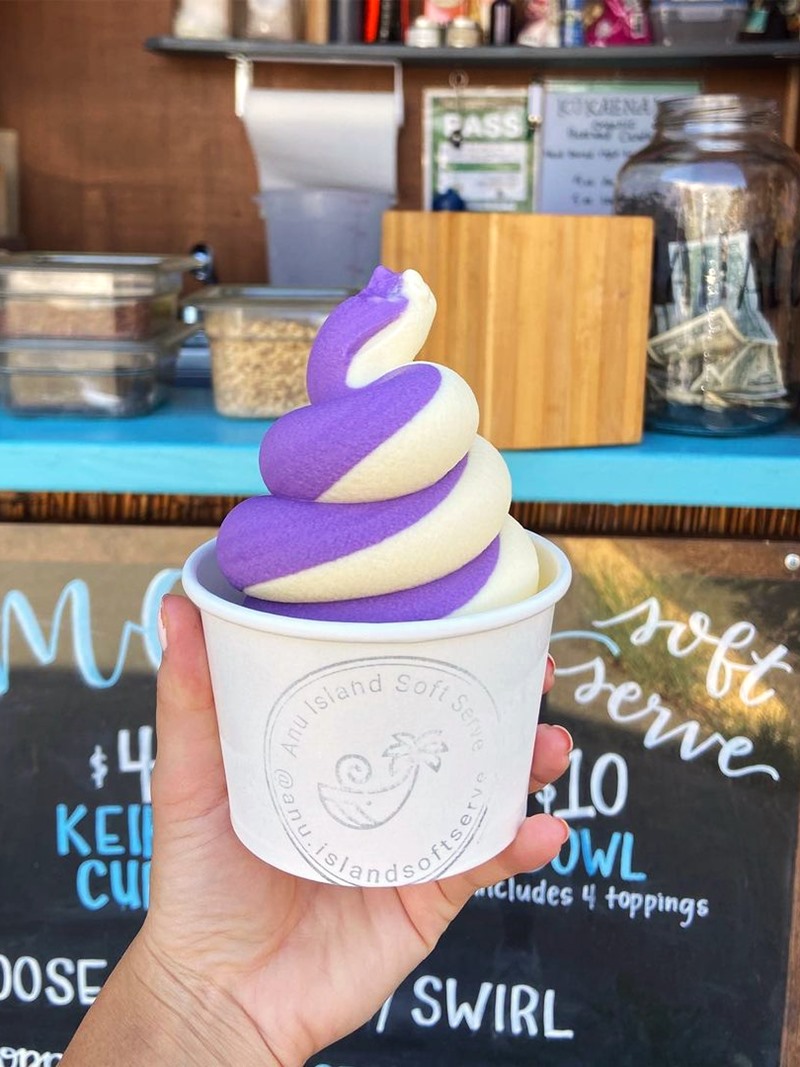 If you’re seeking creamy refreshment without the sugar rush, then look no further than Banán. They swirl banana soft serve made purely with fruit. Consequently, it’s not as sweet as your average soft serve, and can even stand in as a late breakfast or satisfy as a fulfilling afternoon snack. Each location offers at least a few flavors and an array of local toppings. My favorite is the Acai soft serve with honey. 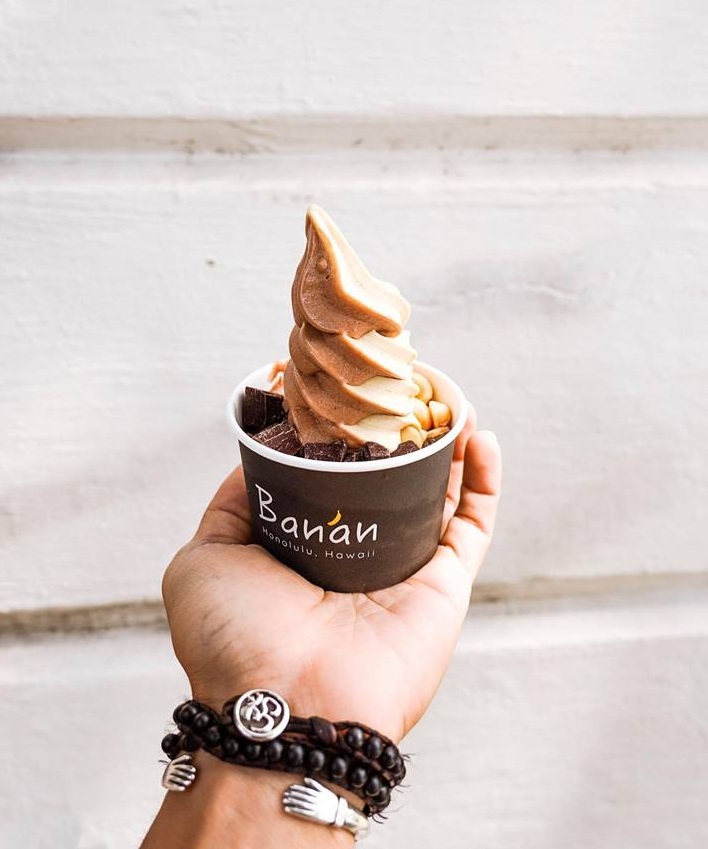 This hidden little shop lacks the aloha greeting, but they are kind enough to have a nice vegan ice cream menu that’s often bigger than their dairy ice cream menu! They boldly state “no samples” on their menu, but you can order a mini Wing Flight of three flavors for just a little more than the price of a scoop. And this is THE place for trying unique Hawaiian flavors. All of their non-dairy flavors are hand-crafted in house, and most are made with a coconut milk base. But they occasionally use soy, like in their Kinako (roasted soy) flavor.

I tried the Cinnamon Toast Ulu (breadfruit), which seemed odd at first, but the warm creamy flavor grew on me with each bite. I didn’t see the flight option until after I ordered (the staff wasn’t too interested in customer service), but if I had, I would have ordered the Chocolate Haupia and Black Sesame flavors too. 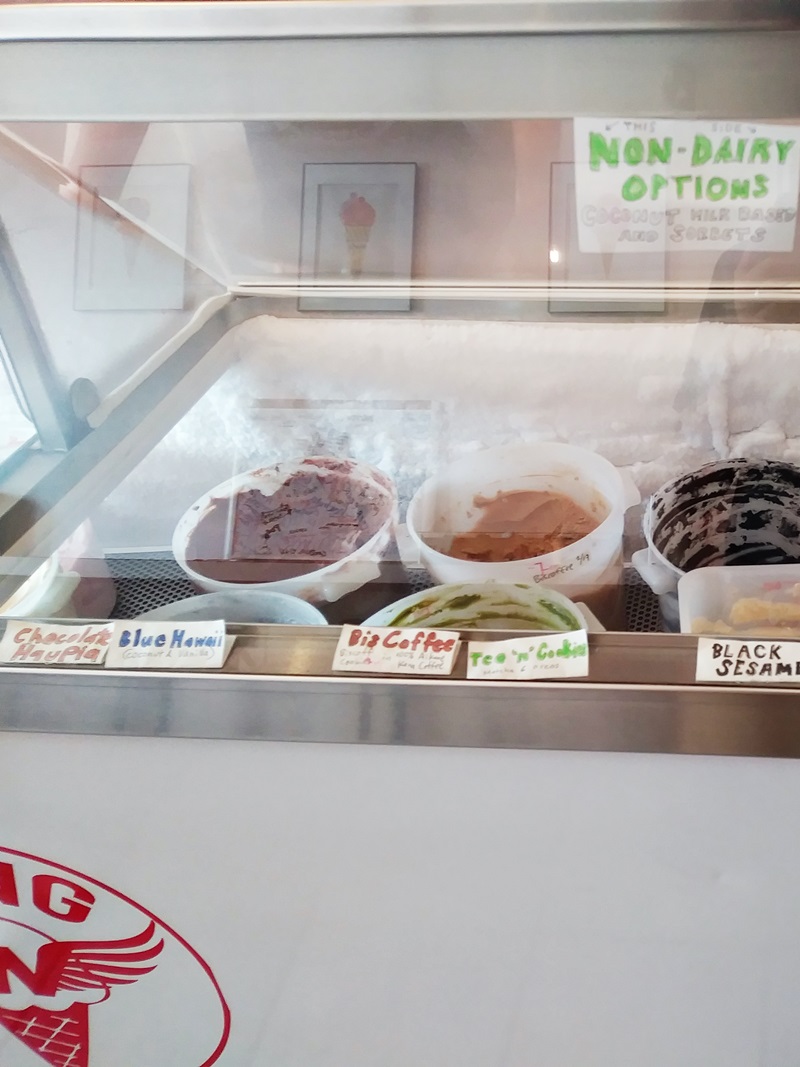 Yes, another dairy-free soft serve shop! They offer pints of their plant based ice cream for pick up, and swirl various flavors at local farmers markets on the weekends. All of their flavors are coconut-based. 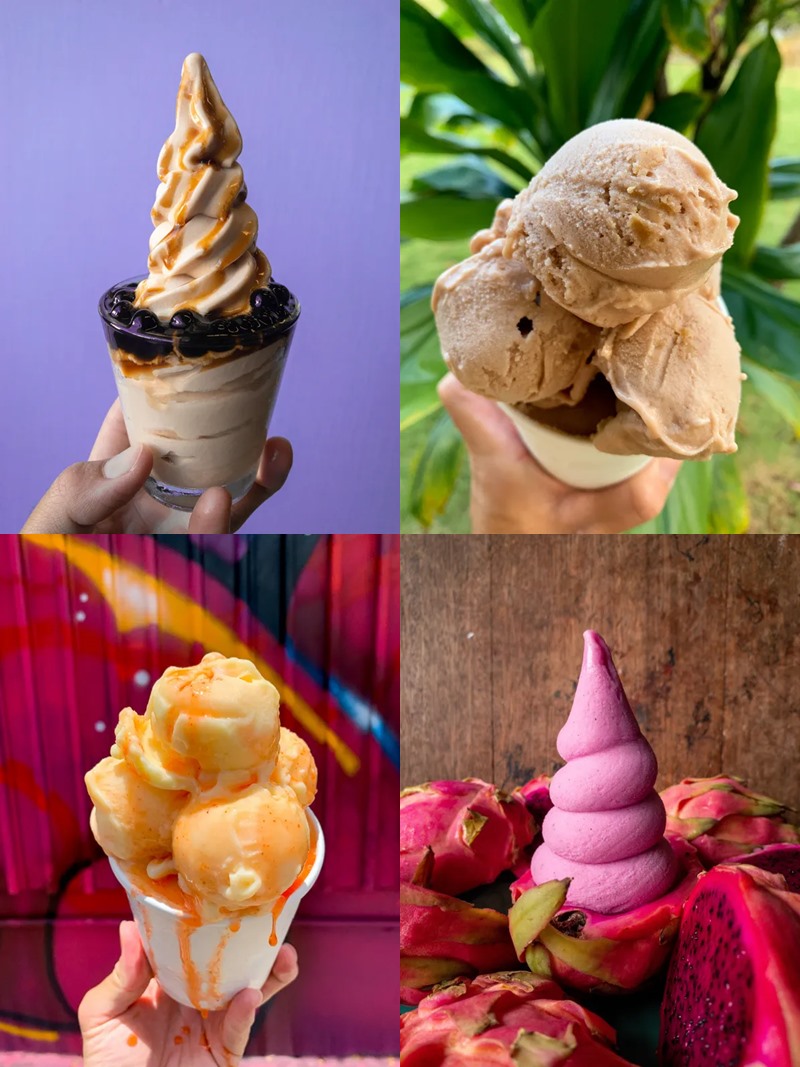 Sure, you can get pineapple Dole Whip at several stores on Oahu, but it’s much more fun to enjoy it at the source. On the way to the North Shore, you can stop in to enjoy the “Pineapple Experience” that’s very family friendly. After everyone has worked up an appetite on the tour and in the pineapple garden maze, they can order a generously-sized, dairy-free pineapple whip with pineapple on top. There is also a Dole Whip stand often set up at the base of Diamond Head. 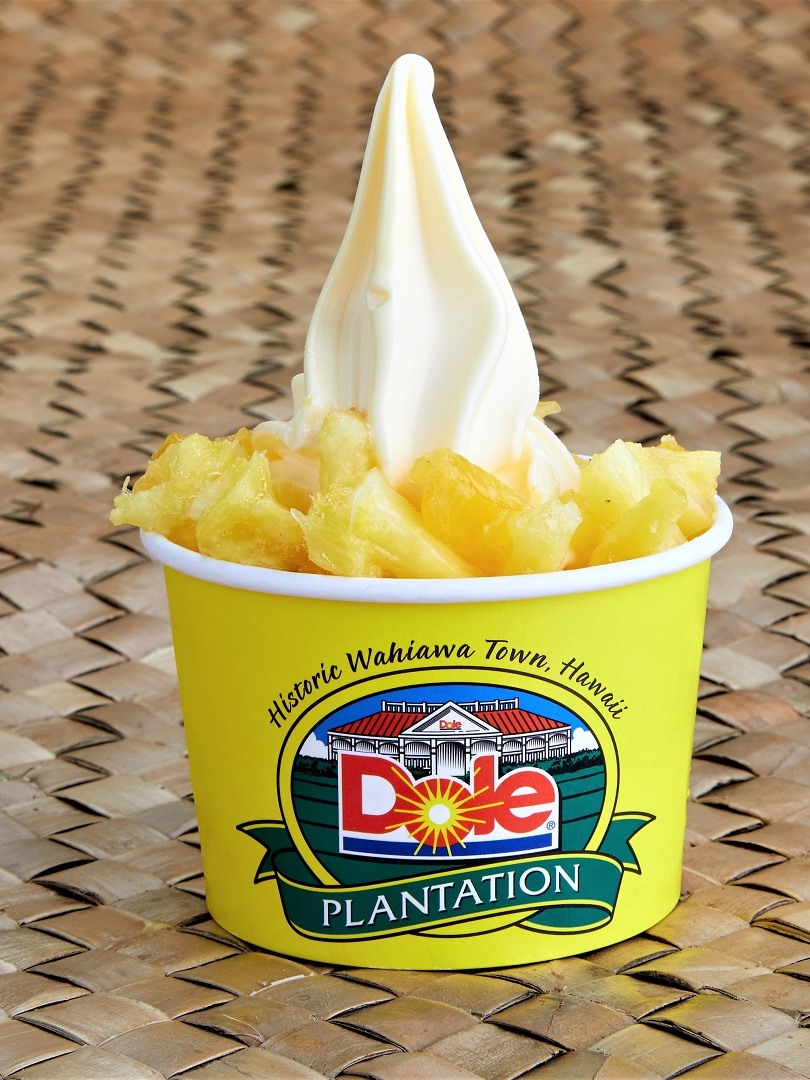 This local vegan restaurant churns their own dairy-free ice cream, and the selection seems to rotate often. They sometimes use a coconut milk base, sometimes cashew, and they usually have at least a couple flavors to choose from but sometimes more. Just some of the flavors that they’ve tinkered with include Black Sesame, Chocolate Avocado, Taro, Okinawa Sweet Potato / Berry, Chai, apple Pie, and Vanilla. The prices at Peace Cafe are actually quite competitive, and they have a handful of toppings available to make it a sundae experience. They also serve their vegan ice cream affogato style. 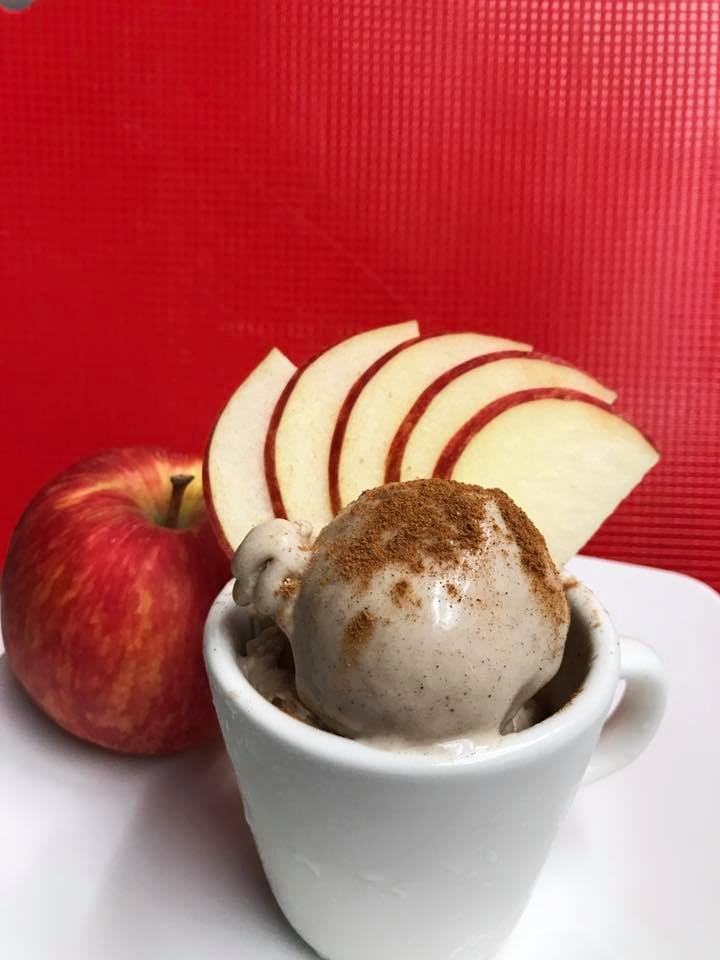 Formerly known as Pressed Juicery, this is a chain with a smattering of locations throughout the U.S. They swirl dairy-free frozen dessert called Freeze in their stores. This is a good-for-you vegan soft serve that’s made with a base of dates and almonds, and contains no added sugars. See our Pressed Dairy-Free Menu Guide for ingredients and topping options. 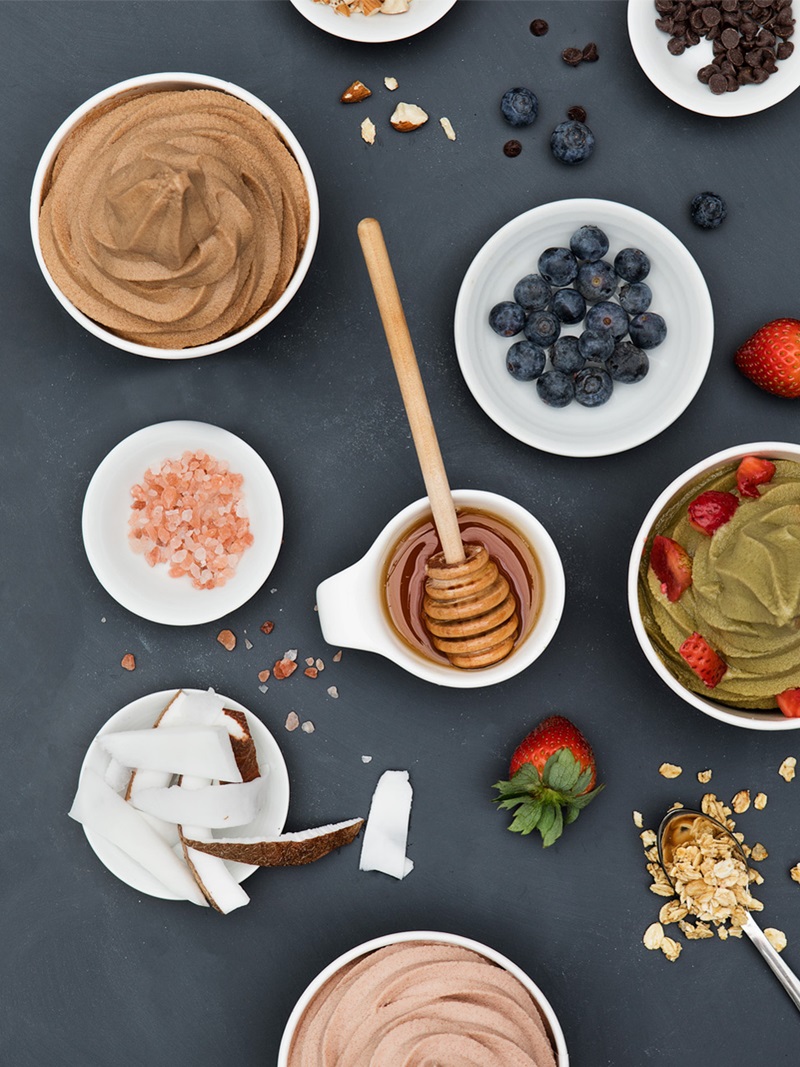 Dairy-free ice cream on Oahu is anything but ordinary, as you will discover at via Gelato. Sadly, their Ward Village location closed due high rent. But their location in the more local Kaimuki neighborhood, a few miles from Waikiki, lives on. Their menu changes almost daily, but they usually have 4 to 6 vegan flavors available. Some regulars include Chocolate Haupia and Lilikoi (passionfruit). But we’ve seen other fun flavors like Lava Flow, Green Tea Oreo, and Okinawan Sweet Potato. They also make vegan gelato cakes. 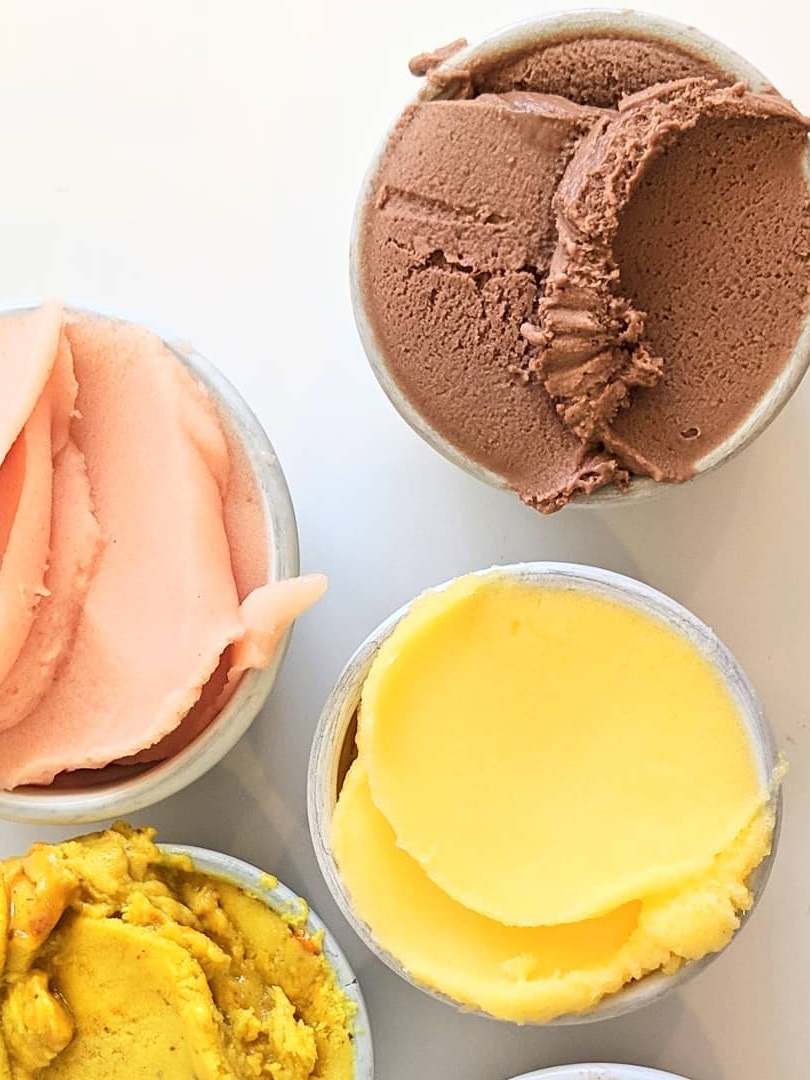 This is a New Zealand-style ice creamery that blends vanilla ice cream with your choice of real fruit. They offer a dairy-free option with locally made coconut milk ice cream as the base. 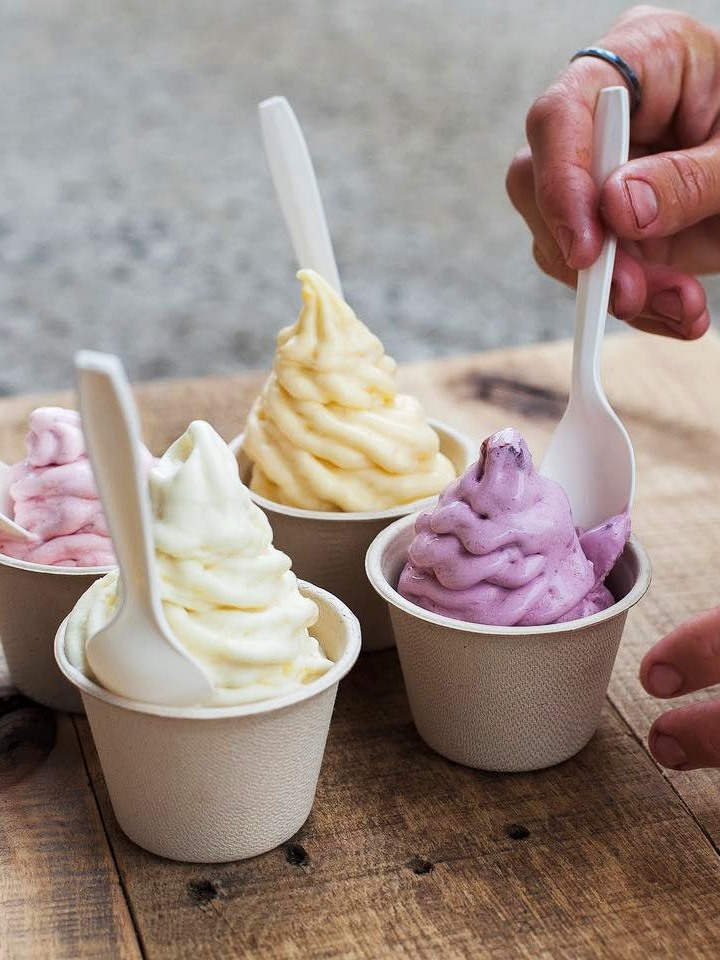 Sorbet might seem a little anticlimactic, but Cafe Glace in Waikiki makes it interesting. It’s a locally-owned and operated gelato shop that always has about ten varieties of dairy-free and vegan sorbetto available. They’re all fruity flavors, but have the creamiest finish. The staff at Cafe Glace is very friendly and will let you sample as many flavors as you like. We ended up getting a multi-flavor cup, which was delicious since the fruit flavors tended to compliment one another. 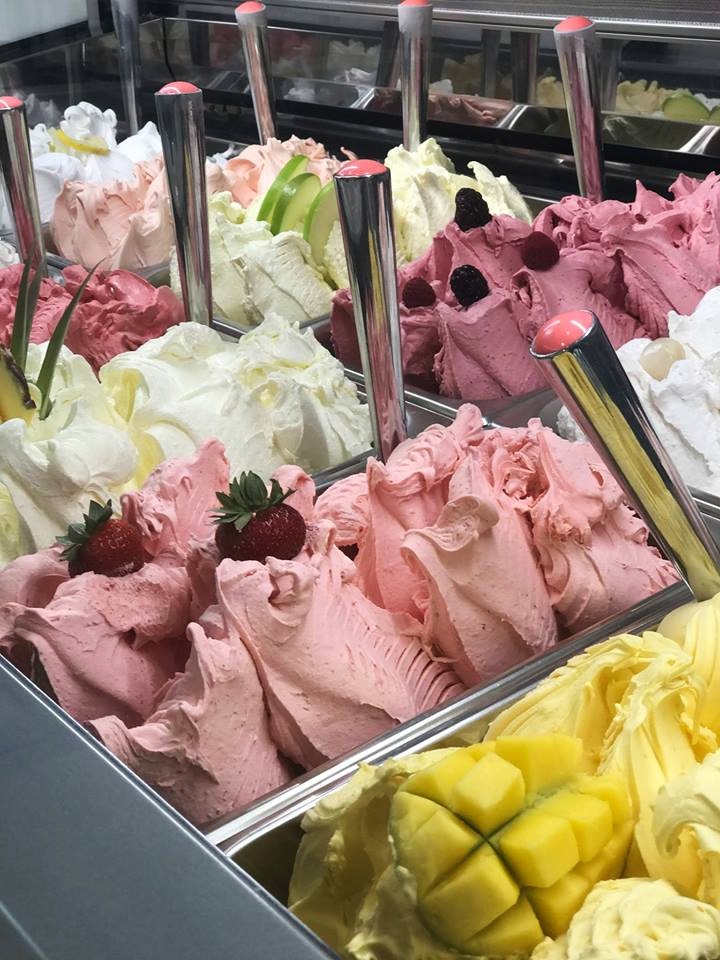 This is a Thai-style rolled ice cream shop. They have a dairy-free and vegan base option for your custom order, and a good selection of mix-ins and toppings. 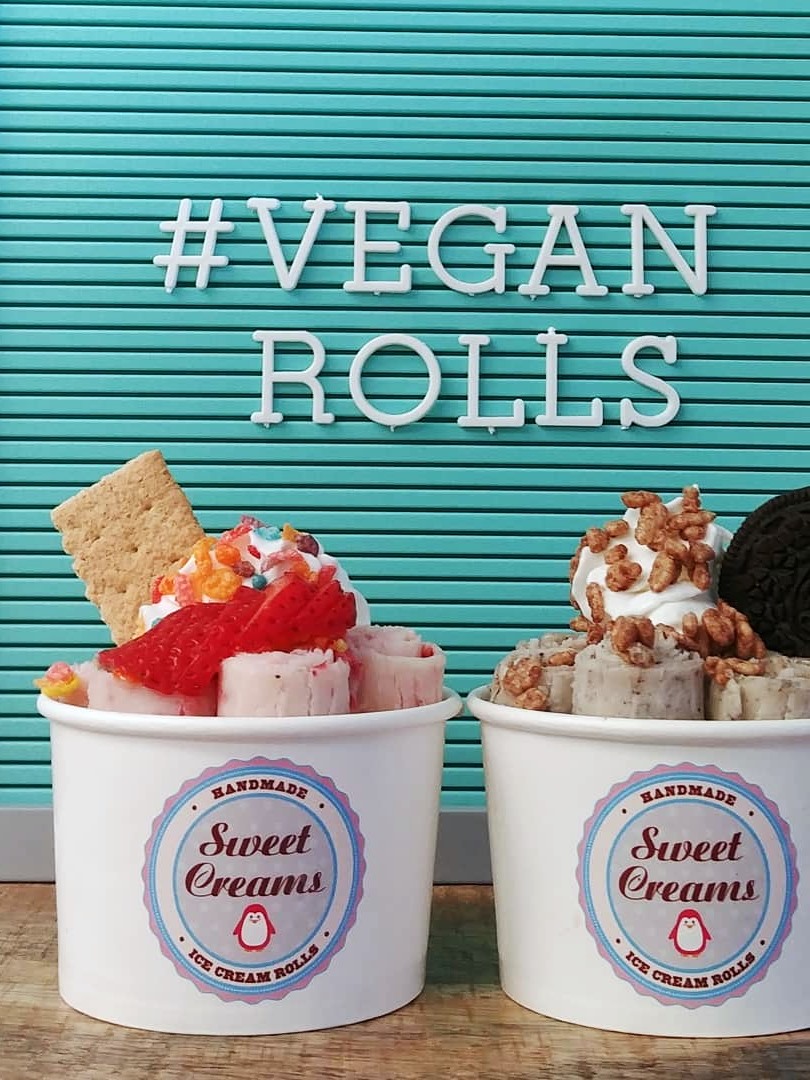 Because the Dole Plantation is right on Oahu, you will see the Dole Whip sign on several stores. But Aloha Whip is one of the few to offer multiple flavors of this allergy-friendly soft serve. They typically serve three different Dole Whip flavors, which can include pineapple, strawberry, raspberry, mango, orange, lemon, or lime. And they periodically make their own non-dairy coconut and ube flavors. Aloha Whip has a great location, tucked inside the open air lobby of the Queen Kapiolani in Waikiki. Just make sure to check the pricing before you order – some people have had issues with the customer service at this spot. 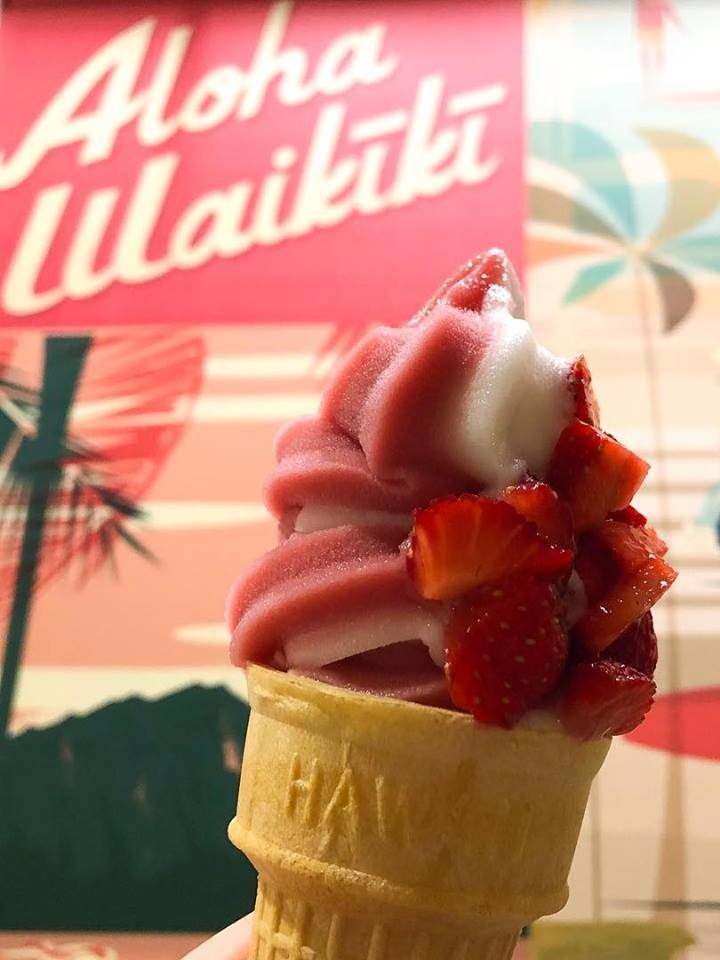 You can only get this soft serve once a week, in the morning, but it’s worth it. This was probably my favorite local dairy-free ice cream on Oahu, so I broke my “no dessert before noon” rule for it. It’s a creamy but refreshing blend of soy and macadamia nuts with a perfectly sweet, warm flavor. They have a few toppings available, but the crushed macadamia nuts are the most popular. 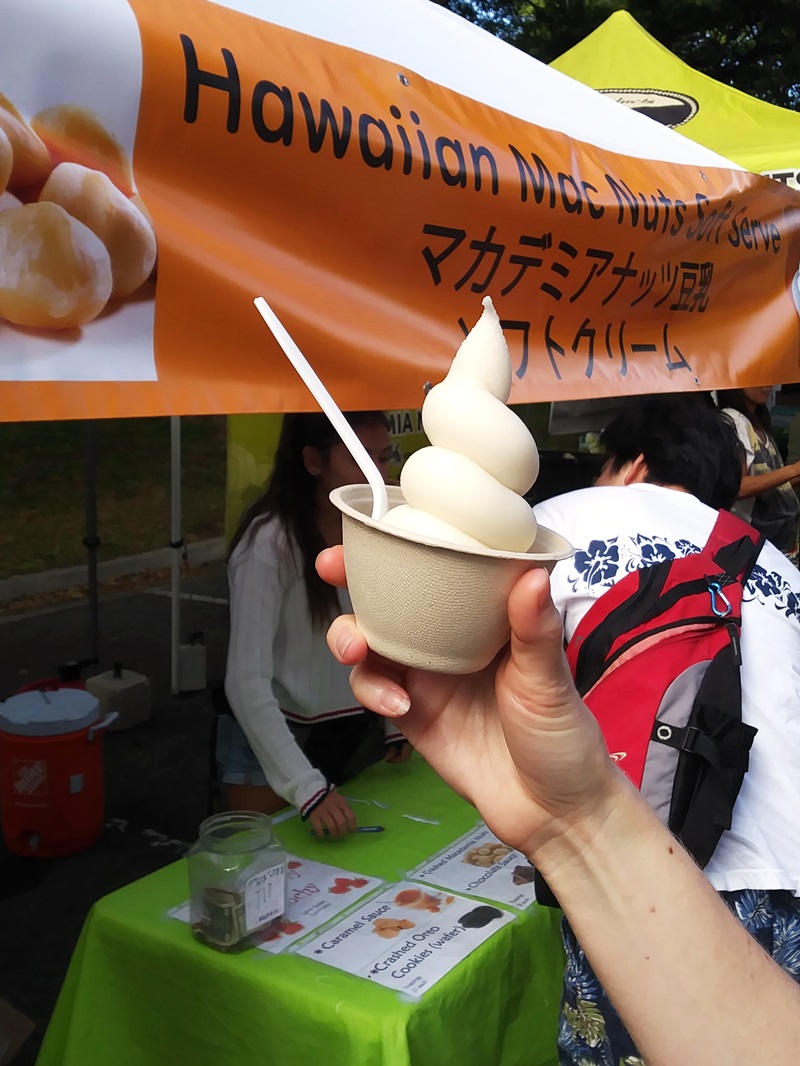 Located right in the center of Waikiki, facing the ocean, this indulgent pit stop couldn’t be any more convenient. They have a few sorbets and usually have one of their creamy, decadent non-dairy flavors available. When we visited, it was Truffle Fudge, which you can enjoy it in a cup or cone. See my Haagen Dazs Review for all of the non-dairy options that they offer at their shops. 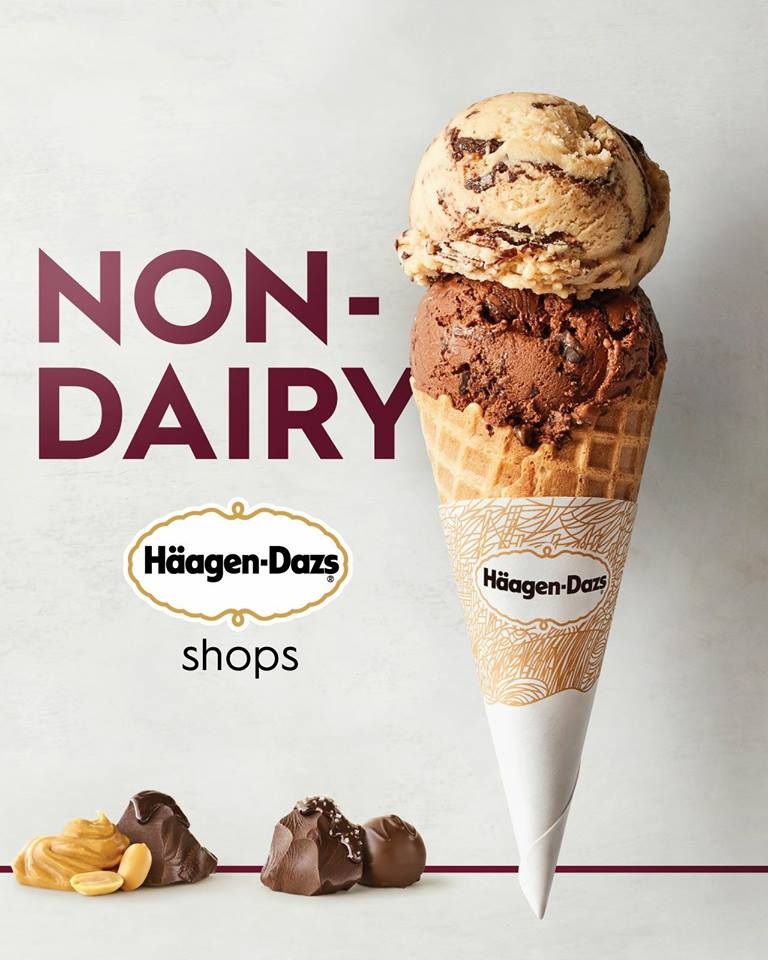 Where to Buy Pints of Dairy-Free Ice Cream on Oahu

Believe it or not, the broadest selection of dairy-free ice cream products can be found at Safeway on Oahu. Safeway now dedicates an entire aisle to ice cream, and the vegan options get several shelves. They also tend to have the most ice cream sales of any store, and their non-dairy options usually go on sale right alongside the dairy version. There are several Safeway stores scattered on the south shore of Oahu and in Kailua.

Whole Foods is the runner-up for pints of dairy-free ice cream on Oahu. They sell many of the “healthier” brands and some of the local options, and they have three locations – one near downtown Honolulu, one at Kahala Mall, and one out in Kailua.

Down to Earth Organic & Natural stores are also great for dairy-free ice cream and desserts. And their prices are usually competitive with Whole Foods. They have two locations in Honolulu and additional stores in Aiea, Kapolei, and Kailua.