I grew up in Portland, well, a very close suburb of the main city.  I ventured into town often for the Saturday Market, festivals, and summer work.  However, at that time, taking in the culture of the city itself was not forefront on my agenda.  Now, returning as a visitor rather than a resident, I was fascinated by the wonderful diversity of people, from a punk subculture to hoards of biking fitness junkies.  Yet, my biggest preoccupation was with the incredible array of restaurants.  Since it had been so many years, and we only had one day in the city itself, I decided to do some research before the trip on where to go for lunch…

Thanks to Food Fight Grocery, I found an abundance of ideas.  Unfortunately, when the day came, vegan food was not on my mate’s agenda.  He had no problem going to check out a bit of the vegan scene, but once we arrived at the restaurant I had chosen, the food (mostly raw) appeared a bit too sparse for his hungry appetite.

Nonetheless, I had read about one delight that I refused to leave the city without trying, vegan soft serve.  No matter that my stomach was now bulging from the omnivorous restaurant that my husband had chosen … I would have my dairy-free ice cream!  To be completely honest, the only thing that has been a real challenge for me with respect to dairy-free living is the inability to go out for ice cream (okay, pizza too).  Sure there are some wonderful brands I can pick-up at the store, but the whole experience just isn’t there.  So when I read that Blossoming Lotus had vegan soft serve, I could not be kept away.

I was surprised to find that the Blossoming Lotus was a casual café, rather than a sit-down restaurant.  It was nicely decorated, clean, and attached to a yoga studio, yet small and much more informal than I had expected.  It seems that at night they have a more formal, sit-down dinner atmosphere. This may warrant a return visit in the future.

My stuffed belly was grateful for their wide range of soft serve sizing. They actually had a 2oz serving for just a $1.  Every 2oz added another $1.  Not a bad deal.  I stepped up and ordered a petite 2-ounce serving of the flavor of the day, Orange Creamsicle.

The service was…well, odd.  They had a half a dozen people working behind the little counter, each looking a bit dazed and confused.  When I said I just wanted the small soft serve, she looked at me a bit awkwardly, and then said ‘they will call you when it’s ready.’  I don’t know about you, but every time I have ordered something that melts, the person at the register usually walks over, pulls the lever to serve it up (the one that I could see just three steps away from the register), and walks back over to hand it to you before you leave the counter.  A simple enough 5-second procedure, really. 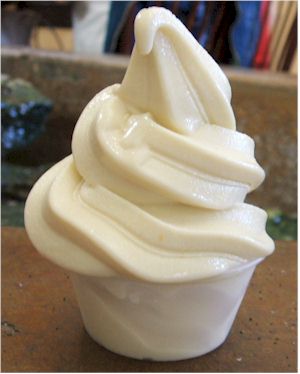 Apparently, the Blossoming Lotus is a bit unique in every way.  So I waited, and waited (seriously, if it hadn’t been vegan ice cream I would have been out of there).  Finally, after ten minutes (literally) I spotted a small soft serve sitting on the counter.  I rushed over to claim it before it melted, since they were obviously not ready to call anyone’s name.

While the service was lacking, the soft serve was not.  It was incredible!  Really, if it weren’t for the fact that I didn’t have an allergic reaction after eating it, I never would have believed it was vegan.  Whatever their recipe is, I hope they plan to share it with some nationwide franchise soon!

Since I had a good ten minutes to stare at the other diners’ meals, I can say that the food looked pretty good.  It was generously sized (monster sandwiches) and fairly priced, with most dishes weighing in at well under $10.  The meals did look quite “gardeny,” but I do like my veggies.  My husband wasn’t as drawn in.

Blossoming Lotus is in the Pearl District, an eclectic area with a few art galleries and a small handful of restaurants.  It is an area of Portland that has been cleaned up quite a bit since my childhood, but still seemed to be in the transformation process.

We also stumbled across Veganopolis near Pioneer Square, another café style restaurant that has received excellent reviews.  They offer a full menu and a lunch buffet.

Portland is a very walkable city, and both restaurants mentioned can be reached on foot when meandering the touristy downtown core.  Another vegan (and therefore dairy-free!) section seems to be lingering in Southeast Portland.  With luck, we will have time to venture that part of town on our next visit.