Alisa Fleming ~ After realizing that my once relaxing grocery shopping trips had turned into quick in and out visits, I decided to slow up the pace a bit, and enjoy the scenery.  It seems I became caught up in the hurried pace of life.  Thankfully, I am now back to perusing the aisles for new and interesting foods.

My most recent target has been Trader Joe’s.  I was amazed at the number of foods, which had suddenly appeared, and have spent the last few weeks trialing several of them.  Unfortunately, I was a bit dismayed by the quality of some of their offerings.  Most of the new samplings have just been okay.  The veggie bisque was over-sweetened, the chicken ravioli bordered on bread crumbs in pasta, and though I have become a regular customer of the gluten-free brown rice tortillas, they certainly aren’t award winning.

Nonetheless, I have discovered two gems, which will be making many repeat appearances in our cupboards: 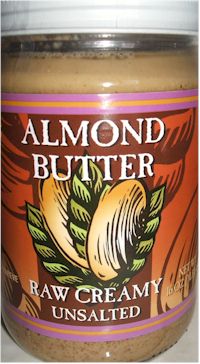 The first is their Raw Almond Butter.  I know, it isn’t a new concept, but this stuff is great and insanely priced.  Peanut butter has been a staple in our house for years, offering some creamy indulgence in cooking, extra flavor and glue in baking, and a nice spread on toast or rice cakes.  But honestly, I was getting bored.  I just couldn’t choke down the $10 to $15 a jar to purchase the “fancier” nut butters.  When I discovered almond butter at Trader Joe’s for just $6, and then saw the raw version, I was excited to say the least.  Full of little almond bits, and a rich creamy flavor, this is my personal favorite from Trader Joe’s.  The light sweetness makes it a great spread sans honey. 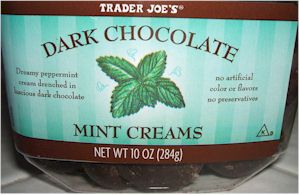 The second is their (new?) Mint Creams.  The main reason I like them, is because my husband loves them, and I don’t have to hear him whine about looking for sugar when these are in the house.  Of course, I think they are pretty tasty too.  Like mini dark chocolate bon bons (well, it is more of a semi-sweet) with a creamy mint filling.  Two thumbs up!