Alisa Fleming ~ Children living in highly populated areas have a much higher prevalence of food allergies than those living in rural communities, according to a new study funded by the Food Allergy Initiative. In fact, the incidence of peanut and shellfish allergies in urban centers is more than double the amount of rural areas.

However, milk and soy allergy appeared to affect a similar proportion of children regardless of geographic area.

The study, led by Ruchi Gupta, M.D., an assistant professor of pediatrics at Northwestern University Feinberg School of Medicine and a physician at the Ann & Robert H. Lurie Children’s Hospital of Chicago, is the first to map children’s food allergies by geographical location in the United States. It included 38,465 children under 18 years old, as a representative sample of U.S. households …

Only food allergies reported to induce one or more of the following reaction symptoms were included in the report: anaphylaxis, angioedema of lips/eyes/face, other angioedema, coughing, other oropharyngeal symptoms, eczema, flushing, hives, low blood pressure, pruritus, trouble breathing, vomiting, or wheezing. Among the cases included in the final analysis, over 70% also included report of a physician diagnosis with IgE testing, skin prick testing, or an oral food challenge.

The researchers found that increasing population density corresponded with increasing number of people with food allergies, from 6.2% in rural areas to 9.8% in urban centers. The significance remained even after adjusting for race/ethnicity, gender, age, household income, and latitude.

According to the study, the states with the highest overall prevalence of food allergies are Nevada, Florida, Georgia, Alaska, New Jersey, Delaware, Maryland and the District of Columbia. See the map below for the distribution results … 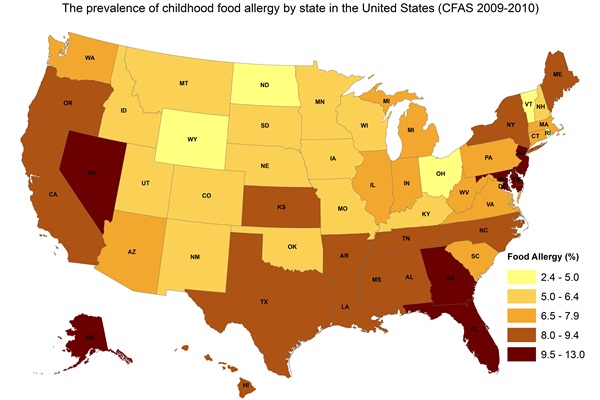 However, the researchers did not see any geographical significance in the severity of food allergies. Approximately 40% of the children in this study had already experienced a severe or life-threatening food allergy reaction, and they seemed to be equally severe, regardless of where the child lives.

At first glance it would seem that the increasing prevalence of food allergies from north to south would disprove the vitamin D theory, and that the higher rate of food allergies in urban centers may support the hygiene hypothesis.  As Dr. Gupta states, “This shows that the environment has an impact on developing food allergies.”

The number of people with food allergies seems to be more highly concentrated toward the coastal states, which is where the population also tends to be denser. Is it a coincidence then that fish and shellfish are two of the top allergens in these urban centers (which tend to be closer to the ocean)? True, peanut allergies also seem to increase significantly as you migrate from the countryside to densely populated cities, but milk, soy, and even wheat allergies do not appear to have a notable tie to population density. Peanuts, fish, shellfish, and to a lesser extent eggs, seem to be the allergens skewing the results toward urban allergy centers.

The results of this study are fascinating and offer excellent insight into the prevalence of food allergies. Hopefully further studies will explore the many questions that have developed from Dr. Gupta’s work. Other Northwestern authors involved in this study include Jane L. Holl, M.D., Elizabeth E. Springston, and Jacqueline Pongracic, M.D.