Steph ~ Being dairy free means giving up a lot of foods that have that creamy goodness we all love. I haven't had chowder, fettuccine Alfredo, or cream of, well… anything, soup in at least 3 years. And I would be lying if I said I didn't miss it. I do! I thought I was done with creamy soups until the day my Mother in Law made this soup for us.

I must have asked her a hundred times if she was sure there was no dairy in it because it was so good I was convinced there had to be. She showed me the recipe and sure enough, there was only coconut milk. The flavors that really make up this soup are ginger and lemongrass. The coconut milk is what gives it the creaminess, and the lime juice added at the end gives it a little tang.

My Mother in Law was kind enough to share the recipe with me, and I have made it quite a few times for my family. Even my 4 year old loves it. That says a lot, because she can be very picky about certain foods. According to both kids and the husband this dish gets the highest rating- 2 thumbs up and "do-over" status ( which is what my kids say when they want me to make it again) …

Original recipe courtesy of my Mother in Law, Deborah McWee, but with some alterations made by me.

Prepare pasta while the soup is cooking.

Smash each lemongrass stalk with chef's knife and place in large soup pot.

Slice ginger and crush ginger and garlic with chef's knife. Add to soup pot, along with red pepper flakes.

Pour in chicken broth and bring to a boil.

Add chicken breasts to the broth. Cover and simmer gently over low heat until chicken is cooked through. About 10 minute or more, depending on the thickness of each piece.

Remove chicken from broth, and set aside.

Bring broth to a rolling boil and let boil for about 5 minutes. If some of the broth evaporated, you can add more chicken stock.

Strain broth into a saucepan, press on the solids to get all the flavors and juices into the broth. Stir in the coconut milk and heat through.

In a small bowl or measuring cup stir together the cornstarch, 3 tablespoons water, lime juice, and soy sauce with whisk. Add to the soup, stirring until the broth thickens slightly.

Slice the chicken and add to the soup. Let simmer for a couple minutes to reheat chicken and let all the flavors mingle.

Serve soup over fettuccine noodles, garnish with cilantro and scallions. (This time I chose to serve it over penne pasta. Just as good!) 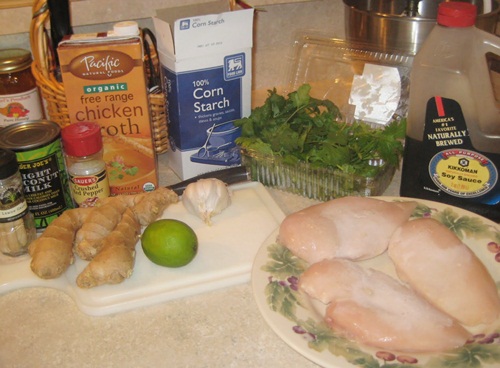 Recipe, article, and photos by Steph of The Dairy Free Omnivore. Steph is a stay at home mom to 3 wonderful kids. She enjoys cooking and baking things from scratch that are dairy-free for herself and for her family. See her blog for more great recipes!