First stumbling upon this fantastic resource a year or two ago, I was initially surprised to find that many mainstream brands of pre-made puff pastry are in fact vegan! Basic and bland on its own, this magical dough is all about what you put into it. That’s why it’s the perfect starting block for your own sweet (or even savory) creations, able to easily adapt to your exacting tastes and preferences. Should you have no idea where to begin, allow me to demonstrate how unbelievably simple it is to throw one of these instant desserts together with minimal work, but end up with maximum flavor. I digress though; This particular pastry was assembled many months ago, so the measurements aren’t exactly fresh in my mind. This is just an approximation, so if things seem a bit off, please alter your own creation based on your own intuition.

Begin by allowing the puff pastry to thaw on its own just sitting at room temperature for at least 30-45 minutes. This is absolutely necessary! If you don’t wait for it to become soft and pliable, it will simply crack when you try to unfold it! Once it has warmed, you will want to spread it out on a silpat or piece of parchment paper, using a rolling pin to smooth out the creases where it was folded and any other small lumps that may exist. Now, when it comes to the filling, anything goes. This is an excellent opportunity to use up leftovers in the fridge, so whatever you have on hand could probably work as well. In my case, I had some extra vanilla frosting [As always] so I combined that with a good dollop of apple butter in a ratio of about 2:1. Starting about an inch in from the long side of the flattened pastry, apply your choice of spread in a generous line, reaching to about 1/4 inch from the short sides. Other excellent substitutes would be jams, preserves, etc. Continuing the apple theme, I opted to chop up a Fuji apple, sprinkled it with cinnamon, and dropped that in alongside my spread. Again, any fruit waiting to be used works just as well. Add ins should be used sparingly so as not to over stuff or over power the other main players in this delicate melody, but could include perhaps 1/4 – 1/2 cup of toasted nuts, chocolate… Or in this case, both!

The only rule to remember is to not spread your filling over more than 1/3 of the surface of the puff pastry. Once you’ve evenly distributed everything you’d like to include, gently roll up the pastry, using the silpat to help you. To secure the edge, moisten it with just a dab of water and press against the other side you wish to adhere it to. Placing this seam downwards, reposition the roll in the center of the silpat, and slide a baking sheet underneath. I chose this time to top it with some addition cinnamon, but you could also sprinkle on a different spice or some turbinado sugar for an extra crunch. Bake off in the oven, following the instructions specified on the package of your puff pastry – This can vary depending on brand! When it’s all done, the pastry will be a lightly golden / brown color, and if you used a margarine-based spread like frosting as I did, you will see a small pool of run-off at the ends. Do not panic – Most will remain safely inside, and the dripping will stop as it cools. Wait until your roll as completely cooled before slicing. To cut, use a serrated knife and use a sawing motion without using any downward pressure so as not to crush or crack the flaky surface. A good portion in my opinion is a 1 inch wide slice, but divide them as you see fit. Served alongside a dairy-free ice cream or vegan whipped topping, you’ll be thankful that you still made the effort to create something delicious, and not resort to that dreaded box of chemical-based cake substitute!

Milk Allergy is a Leading Cause of Anaphylaxis, and Awareness 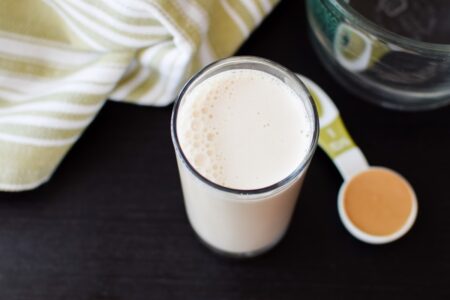 Instant Nut Milk made with 2 Ingredients in Just 2 Minutes!