Alisa Fleming ~ Late last year I had the amazing opportunity to meet the Make it Fast, Cook it Slow maven, Stephanie O’Dea. And perhaps, amazing is an understatement. This cookbook author and supermom bubbles with energy and will rarely be caught without an enormously genuine smile.

Because I wanted to know how she does it all, I got my oven mitts on Stephanie’s latest cookbook More Make it Fast, Cook it Slow. Though it is marketed to the mainstream, Stephanie is gluten-free, and so are all of her recipes (she offers both gluten-free and non-gluten-free options). But to my pleasant surprise, she also had a boatload of dairy-free recipes in this rather sizable collection. In fact, most of the recipes in More Make it Fast, Cook it Slow are either dairy-free, or quite easy to adapt (ie – replace the butter with Earth Balance or milk with unsweetened milk alternative).

The recipes are broken down into three major sections: $7 and Under, $10 and Under, and $15 and Under. From there each section has a full selection of recipe-type chapters, including: Beverages, Breakfasts, Appetizers, Soups & Stews, Beans, Side Dishes, Vegetarian Main Courses, Poultry, Beef & Pork (with Lamb & Venison added in the “most expensive” chapter), and Desserts …

I've just barely made a dent in the 200 recipes, starting first with the Vegan Sweet Potato Chili. Simple, flavorful, and gone within a day … that’s the way we like recipes around here. I also trialed the General Tso’s Chicken, which has a wonderfully sweet flavor. Unfortunately, I used chicken breasts, which got a bit too dry … Stephanie recommends chicken thighs for that one, and I think she is definitely right.

Since I've only tried a mere one percent of the recipes so far, I thought I'd share some reviews of More Make it Fast, Cook it Slow from fellow bloggers, too. As you can see from Diane at The WHOLE Gang, the Sloppy Lentils also turn out wonderfully, and Wendy at Celiacs in the House has already given the thumbs up to the (Crockpot) Baked Tofu. Kim at Cook it Allergy Free reported the Chicken Cacciatore as a "huge hit," and Tia at Glugle Gluten-Free was highly impressed with the delicious lumberjack-sized portions for the Indian-Spiced Lentils with Chicken.

Some other recipes I have marked to make include the …

… and … the Easy Peanut Butter Chicken, which Stephanie is so kindly permitting me to share with you today! …

This is a sample recipe from Make it Fast, Cook it Slow, by Stephanie O’Dea. Just like in her book, each recipe includes a "verdict" at the end with additional notes.

* If you are going to use quarters, or meat with bones, be aware that the meat will probably fall off the bone, and you'll need to fish out the bone pieces before serving. I've used this sauce with a whole chicken (I doubled the sauce ingredients for a 4.5-pound bird) and it was fantastic, but the bones were a bit of an issue. 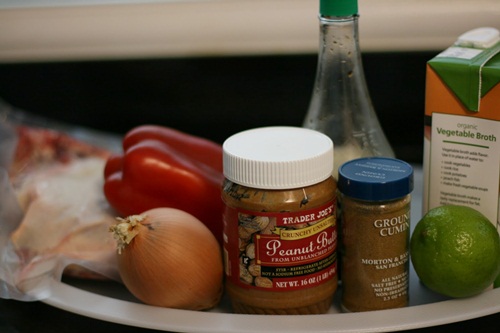 Use a 4-quart slow cooker. Put the chicken into the bottom of your pot and add the peanut butter. Toss in the vegetables and cumin. Squeeze in lime, and add soy sauce and chicken broth. Stir as well as you can to combine (the peanut butter will be clumpy, and that's just fine). Cover and cook on low for 6-8 hours, or on high for about 4 hours. Serve over rice or quinoa.

Adam [husband]and I both think this sauce tastes like the Thai Peanut Butter chicken we order from our local Thai restaurant. It's delicious—and the whole pot costs less than 1 serving does at the restaurant! If you're not serving children and would like a bit of a kick, you can add red pepper flakes either while cooking (start with 1/2 tsp) or at the table to taste. If you'd like, you can squeeze on some extra lime juice at the table.
My kids love this meal, and eat much more than they usually do for dinner when I serve it.

This is a third-party review by Alisa Fleming, founder of GoDairyFree.org, blogger at Alisa Cooks, and author of Go Dairy Free: The Guide and Cookbook for Milk Allergies, Lactose Intolerance, and Casein-Free Living. Alisa is also a freelance writer for several publications, with an emphasis on creating recipes for various types of special diets. 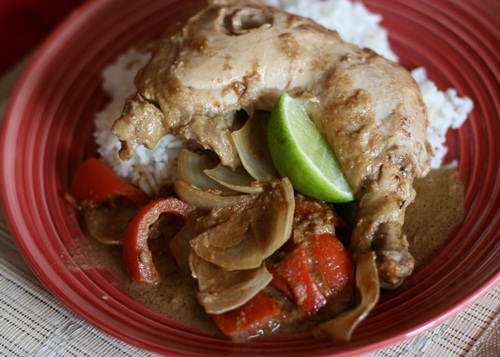