Our monthly “Bits and Bites” from the dairy-free world also include news of interest to the food allergic, vegans, GFCF dieters, and all around health-oriented people. If you have any relevant news or announcements to share for our round-up, simply contact us.  Now, our (19) April news shorts in no special order …

Researchers Weigh In: Hidden Food Allergies Could Be Making You Fat
As reported by Medical News Today: “Medical researchers from Dubai reported in the April ’09 edition of the Middle East Journal of Family Medicine (The Effect of The ALCAT Test Diet Therapy for Food Sensitivity in Patient’s With Obesity) that patients unable to achieve goal weight loss by calorie restriction alone were significantly aided in their attempts when they avoided foods that had been shown by a unique lab test to excite their immune response …

The authors, led by Dr. M. Akmal of the Dubai Specialized Medical Centre, pointed out that hidden food allergies, or food sensitivities, are unique to each individual and can cause inflammatory diseases, and an inability to lose weight. Food sensitivities often provoke delayed and chronic symptoms, like IBS, migraine and arthritis, that are not as obvious as the dramatic and immediate onset of “true” food allergies, such as peanut anaphylaxis, but, over the long term, can be just as devastating and are more difficult to detect.”

The 12 week study followed 27 weight loss patients who used just one treatment in their weight loss attempts, avoidance of foods that were identified as immune reactive for them via ALCAT blood testing. The participants lost an average of 37 pounds, had an average BMI drop of 6 pionts, and exhibited a solid decline in percent of body fat. 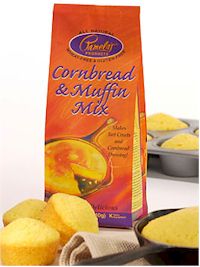 We received this announcement direct from Pamela’s, “This delectable mix is made from organic corn and comes with many tempting recipes on the bag. Try everything from Pamela’s Sweet Old Fashioned Cornbread to Pamela’s Buttermilk Cornbread [using your own buttermilk alternative], and Pamela’s Sweet Pepper Cornbread, but Pamela couldn’t stop there… oh no, she’s also included her own Pamela’s Southern Cornbread Dressing, Cranberry Orange Corn Muffins and, truly over the top, the tantalizing Pamela’s Savory Tart Crust!” This mix is labeled as Wheat-free, Gluten-free, Non-Dairy & Sugar-free, is made with all natural, non-GMO ingredients, and is kosher certified. It should begin appearing on store shelves soon, but in the mean time, it is available on Amazon.

Black Male Children Have Higher Probability of Food Allergies
A study for presentation at the American Academy of Allergy, Asthma & Immunology’s annual meeting in Washington DC, reported that as a group, black male children are more likely to have food allergies. As written by the Health Day News: “The national survey included 8,203 people, from infants to seniors who tested positive for the allergen antibody linked to possible issues with eggs, milk, peanuts and shrimp. Based on their analysis, the researchers estimated that 2.55 percent of the general population has food allergies, most often to shrimp and peanuts. But they found that the odds were much greater among blacks, males and children — especially young black boys. Males and children had nearly twice the risk for food allergy as others, blacks had triple the risk, and black children were four times more likely to have food allergies.

Could There be Milk In Your Inhaler?
This may not be new news, but it was a new discovery for us, and one that I thought important to share. Karen over at Avoiding Milk Protein reports, “I am getting over a chest infection, and was prescribed an inhaler. Reading through all the information I found that the inhaler has lactose it it, and that it may contain milk protein. A few years ago my allergic child was prescribed an inhaler for the first and only time. I asked the doctor if it was milk free, he said yes. I asked the pharmacist he looked it up in his active and inactive ingredient binder he said it was milk free. I insisted he also call the company because I read things on line about inhalers having milk in them, good thing I did, because they said the inhaler had milk in it. I went through the channels and got another inhaler that was milk free.”

EPA Funds Study to Identify Food Allergy Triggers
The U.S. Environmental Protection Agency (EPA) has announced a $466,125 research grant to the Mount Sinai School of Medicine to investigate the mechanisms that make food allergies occur and to hopefully identify what triggers the switch. George Pavlou, Acting EPA Regional Administrator, said, “An important component of EPA’s biotechnology research is to improve our understanding of the health effects from genetically engineering proteins. This study will bring us closer to identifying environmental or dietary triggers that lead to food allergy.” Yes, it sounds as if someone is finally researching the possibility of a link between GMO’s and food allergies! 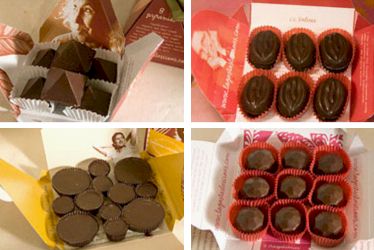 If you have ever read my reviews of Lagusta’s truffles (all vegan, all the time), then you know this news is not to be taken lightly. “The Lagusta’s Luscious team has been working for over a year on our new chocolate line, and it is finally ready! Introducing: Bluestocking Bonbons! Our gorgeous new boxes are printed with 100% recycled paper and vegetable-based inks. They feature a beautiful drawing of a chocolate plant commissioned by Lagusta’s Luscious and the great graphic design work of our neighbors at Treeo Design—you won’t be able to throw yours away, I promise.” The new chocolates come in the following varieties: vandana shivas, pauline benjamin’s peanut butter cups, raspberries de pizan,  chocolate coconut cream pyramids, and furious vulvas. Visit the new Bluestocking BonBons Website to find a description of each of these new chocolates and to read the story behind the name, Bluestocking BonBons.

Availability of Dairy-Free and Vegan Restaurant / Take-Out Pizza on the Rise
It wasn’t long ago (seriously, just last year) that I found myself writing in amazement about a pizzeria offering dairy-free cheese as an option. But it seems this trend is really catching on. Pizza Fusion, an organic pizzeria that offers vegan/dairy-free and gluten-free pizzas, has opened yet another location, bringing their franchise reach up to twelve states. The new location is in Naperville, IL. But beyond this chain, the number of dairy-free-friendly pizzerias is seriously climbing. This week alone, I added five pizzerias to our Dining Out section. Check out the Suggested Restaurants section here on Go Dairy Free for more details. Also, don’t forget to email us if you have a suggested restaurant to add to this list. We except worldwide submissions.