Alisa Fleming ~ Recently, a Facebook fan inquired on my reasons for addressing other dietary issues such as wheat and gluten on this website and in my book, Go Dairy Free. At first, I wasn’t sure if I should post her very poignant question on this website, “… what celiac would look at a book that says "go dairy free" and think "oh yeah, I need that"?” But then a good friend shared a post that discussed the issues of cross-reactivity, and I realized that this misunderstanding is probably quite common.

To clarify, my family is dairy-free, but we are not gluten-free at this time. Go Dairy Free, the book and this website, are not strictly gluten-free either, but I do make efforts to let people know their gluten-free options or when a recipe or food just happens to be gluten-free (many foods are, so don’t let the gluten-free label scare you away!). Also, having immersed myself in the free-from world for several years now, I have many, many friends who are gluten-free, and they help to keep me educated on the topic. Of my gluten-free friends, about half are also dairy-free, which coincides well with the stats that I will be addressing in this post …

But first, let’s touch on the reason that most gluten-free people initially cut out dairy. Gluten issues such as Celiac Disease cause gut damage, leaving many patients with an inability to properly digest certain foods, like lactose (milk sugar). Upon being diagnosed with Celiac disease, most patients are advised to eat dairy-free or lactose-free, at the very least. Once a Celiac patient has followed a strictly gluten-free diet for several months (the length of time varies from person to person), their gut often “heals” and digestion improves. Some regain the ability to properly digest lactose, but for some, the lactose intolerance persists.

However, lactose isn’t necessarily the only dairy problem for those with Celiac Disease or gluten sensitivity. A large percentage of these individuals do not improve on a strict gluten-free diet alone because they have “cross-reactivity” with other dietary proteins. In these cases, the immune system attacks other proteins in certain foods as if they were gluten, causing symptoms to persist. According to Primo Health, “Studies show that about 50% of gluten sensitive patients also have a problem with a protein called casein found in bovine (cow) dairy.” So for some, lactose is the only concern, and perhaps temporarily, but for many, issues with milk proteins persist and warrant a diet that is not only gluten-free, but also dairy-free.

Cyrex Labs, a new laboratory dedicated to gluten sensitivity, autoimmune disorders, and the overall topic of immunology, has been key in uncovering these cross-reactivity issues. They have actually identified a group of cross-reactive foods that do not contain gluten, but may be exacerbating the immune response for gluten sensitive patients. Though there may be others to add to this list, these are the foods / proteins that they have identified for cross-reactivity thus far: Cow's Milk, Quinoa, alpha and beta-Casein (milk protein), Yeast, Casomorphin (milk protein “fragments”), Tapioca, Milk Butyrophilin (another milk protein), Buckwheat, Oats, American Cheese, Sorghum, Coffee, Chocolate, Millet, Corn, Sesame, Rice, Hemp, Amaranth, and Potato. To note, the Cyrex Labs cross-reactivity list also included some wheat-based and wheat-free foods that do contain gluten, and should probably be avoided by gluten sensitive patients regardless. Those included Rye, Barley, Polish Wheat, and Spelt.

This isn’t to say that all people who are gluten sensitive will need to avoid this entire list of foods. However, for those who have gone gluten-free due to Celiac Disease or gluten sensitivity, and have not found symptom relief, the concept of cross-reactivity may hold some much-desired answers.

For anyone concerned about cross-reactivity, there are currently two viable options for testing. One is to request that your physician order a cross reactivity panel for you from Cyrex Labs. A second, less expensive option is to trial an elimination diet excluding the foods above, and then after a few months (once your symptoms have eased), introduce the foods one at a time, observing if any symptoms return following the reintroduction of each food. An elimination diet can be done with the supervision of your physician, and it is recommended that you consult your doctor before undergoing any change in diet.

Though a cross-reactive elimination diet may sound tricky, it actually falls right in line with the Paleo diet. Paleo diets are based on the concept of eating like “cavemen,” enjoying only those foods that were accessible and edible before the agricultural revolution. There are ample books available on this topic, but my favorites are the ones by Dr. Loren Cordain and Robb Wolf. These will assist most with both dairy-free and gluten-free, while avoiding grains and starches, too. For cookbooks, Everyday Paleo and The Paleo Diet Cookbook come highly recommended. For information, The Paleo Diet Solution and The Paleo Diet are two that I can recommend.

Please note that the Primal diet is slightly different. While books on the Primal diet may also be helpful, Primal authors tend to include dairy (mostly dairy fat such as butter, cream, and cheese) in some of their recipes.

For more information on this topic of cross-reactivity, I highly recommend reading the post 18 Gluten Cross Reactive Foods on Primo Health. The author offers simple explanations, and also urges those with Celiac Disease to keep in mind that non-food influences can also trigger immune responses, such as stress, infections, and trauma.

Article by Alisa Fleming, founder of GoDairyFree.org and author of Go Dairy Free: The Guide and Cookbook for Milk Allergies, Lactose Intolerance, and Casein-Free Living. Alisa is also a freelance writer for several publications, with an emphasis on creating recipes for various types of special diets. 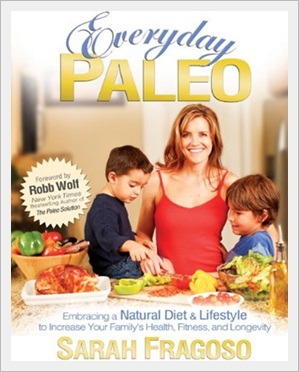