I created this guide several years ago because dairy-free veggie burgers were actually difficult to find. Most brands used milk in some form, and even less were vegan. It was ironic that most veggie burgers weren’t made with just veggies! But as the plant-based movement has taken hold, vegan veggie burgers are popping up everywhere, and many brands have even changed their old formulas.

So I’ve updated our guide to include all of the vegan veggie burgers we could find in North America. Our round-up now includes over 25 Brands, dozens of varieties, and over 25 Recipes for you to make at home! 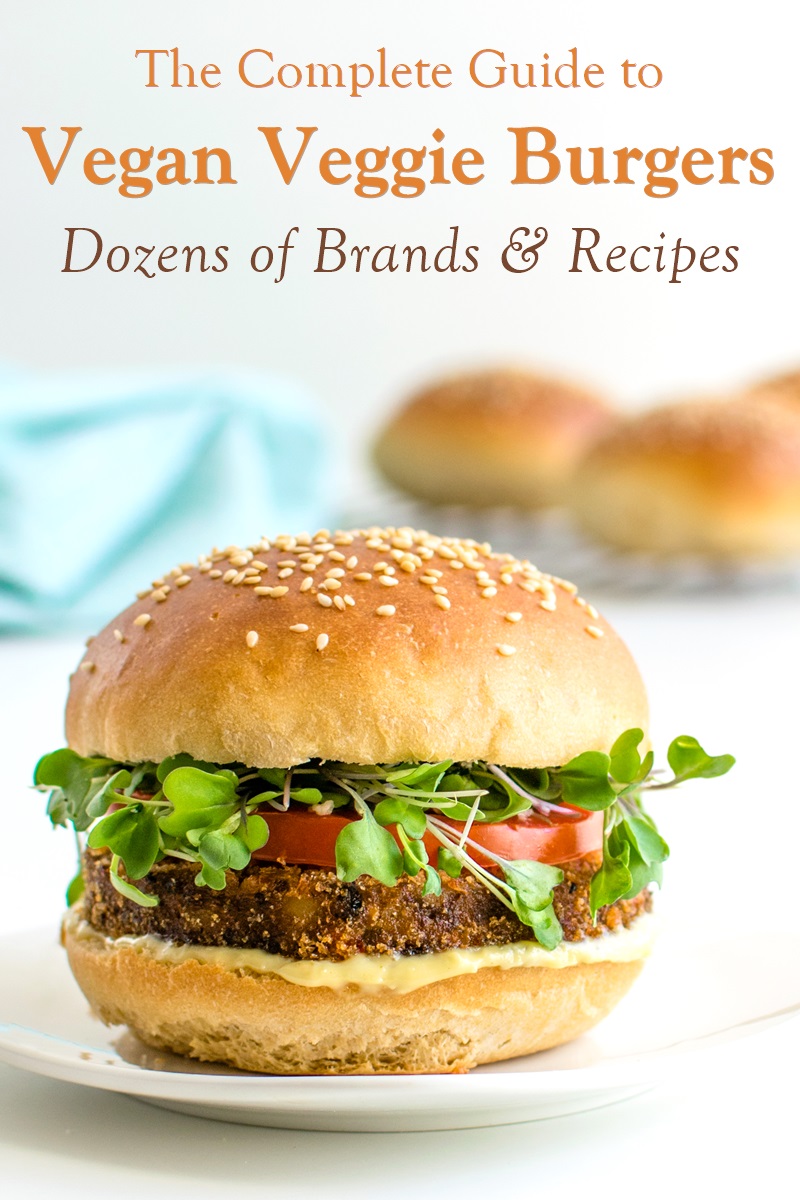 25 Brands of Vegan Veggie Burgers You Can Buy Right Now

👍🏻 Brands with this emoji are on our Dedicated Dairy-Free Facilities List.

This post is for informational purposes only and should not replace your own due diligence. At the time of our review, the products listed were made without dairy ingredients (or other animal-derived ingredients). But manufacturing processes and ingredients are subject to change at any time, without notice. Always read the ingredients before consumption, and always contact the manufacturer if you are dealing with a severe food allergy or high sensitivity. All products are at risk for some degree of potential cross-contamination with allergens. Only you can decide what is safe for your needs.

Amy’s isn’t a completely vegan company, but at last check, all of their veggie burgers were vegan. Their options range from earthy grain and vegetable patties to “faux meat.” Each variety is different, so some are soy-free, some are gluten-free, and some are nut-free by ingredients. Amy’s runs a peanut-free and egg-free facility. See my review here.

When I first posted this round up in 2014, Beyond Burger didn’t exist. Now it’s in nearly every grocery store! These are highly processed “faux meat” patties made with various extracted plant proteins, including pea protein.

This small company makes plant-based “meats” with whole food ingredients. These patties are made with a blend of peas (whole, not protein), sunflower seeds, chia seeds, rice flour, and other vegetables and spices.

There are many vegan veggie burgers on the market, but this is one of the original “faux meat” burgers. Consequently, their ingredients are more on the highly processed side. Avoid the All-American burger, which contains dairy.

Bubba Burger makes all types of beef burgers, turkey burgers, and vegan veggie burgers. At last check, all of their veggie burgers were vegan, and made with a wholesome base of beans and vegetables.

Deep Foods specializes in convenient Indian cuisine, and they have one veggie burger. It’s made with potatoes, vegetables, bread crumbs, and Indian spices, and it’s also sold under Trader Joe’s brand.

This brand gets little fanfare, but they’ve been around since the 1940s. They make both meat burgers and veggie burgers, and their veggie burgers range from “faux meat” to plant heavy. They’re available in many mainstream grocers, including club stores.

With fourteen varieties and counting, Dr. Praeger’s seems to be taking over the healthy vegan veggie burger market. They use mostly whole food ingredients, like grains, vegetables, and legumes. Even their newer “plant protein” and mock meat-style products are more natural than competitor products. See my review here.

Founded by famous firefighter Rip Esselstyn, this brand has a health-first approach. Their plant burgers are all bean-based burgers made with whole food ingredients you could find in any kitchen.

Field Roast is the master of “wheat meat.” They even shared this vegan grain meat recipe with us, but I still prefer to just buy it. Their lone burger is made with vital wheat gluten, barley, carrots, celery, mushrooms, and more.

Gardein is now part of mega-corp Conagra, but they’ve retained their plant-based ways. They offer both wheat-based and gluten-free vegan veggie burgers. The wheaty ones are focused on faux meatiness, and are made with wheat and soy protein. The gluten-free varieties focus more on whole food ingredients. For quick appetizers, they also make a few varieties of sliders, with vegan bun and all.

This is one of the original mainstream veggie burger brands. Unfortunately, they use milk in their Original and Portabella varieties (which ar emade on the same equipment).

This shelf-stable mix is made purely with organic gluten-free whole grains and spices, and is prepared with just water!

These top allergen-free, gluten-free millet burgers are made with whole food ingredients. They’re a great option for people interested in the “veggie” aspect of veggie burgers.

These tofu burgers are naturally high in plant-based protein – no protein extracts needed. They also boast refreshingly short ingredient statements with vegetables and spices. Plus, they’re a good source of dairy-free calcium. Each patty boasts 25% of daily needs.

This company targeted food service first, so your more likely to order their burger in a restaurant. But they are expanding into retail, and some companies sell them wholesale. These are purely mock meat-style with protein concentrates, binders, etc.

This is a “faux meat” style burger made with pea protein for protein levels that rival beef.

These gluten-free, allergy-friendly, millet-quinoa burgers are made with vegetables, spices, and mostly whole food ingredients. They’re definitely grain and veggie burgers, with a hearty, earthy texture, but they taste quite good. See my full review here.

Made with mycoprotein (fungus?), these controversial vegan burgers have been on the market for decades in Europe and several years in the U.S. But they are banned in Canada. Note that most of their burgers do contain dairy and egg, but not the “vegan” burger specifically.

They combine whole grain and vegetable burgers with protein for their own spin. Some varieties lean toward veggie, while others are slightly on the “faux meat” side.

The simplicity of this company is refreshing. They only make vegan veggie burgers – no other products – and they do so with minimalist ingredients. In fact, some of their burger varieties have just five ingredients! Consequently, this is a grain and veggie brand with naturally earthy textures and homemade flavors.

This vegetarian company sells their veggie burgers in fresh and frozen formats, with the exception of the Awesome Burger, which is only sold fresh. This isn’t a strictly dairy-free brand, but all of their burgers appear to be vegan and made with “faux meat” appeal.

This brand has been around for a while, but their vegan veggie burgers are new. This is a mock meat type of burger made with soy protein and gluten for higher protein and meatier texture.

Upton’s makes a variety of meaty vegan products, but they have one lone burger. It’s a grilling type mock meat burger made with vital wheat gluten, eggplant, and tofu.

This brand makes veggie burger mixes with oats, beans, rice, vegetables, spices, and simple “just add hot water” instructions. Since they are shelf-stable, you order them online and keep them stocked in your pantry.

Their websites were down at our time of review, so we couldn’t complete this information. 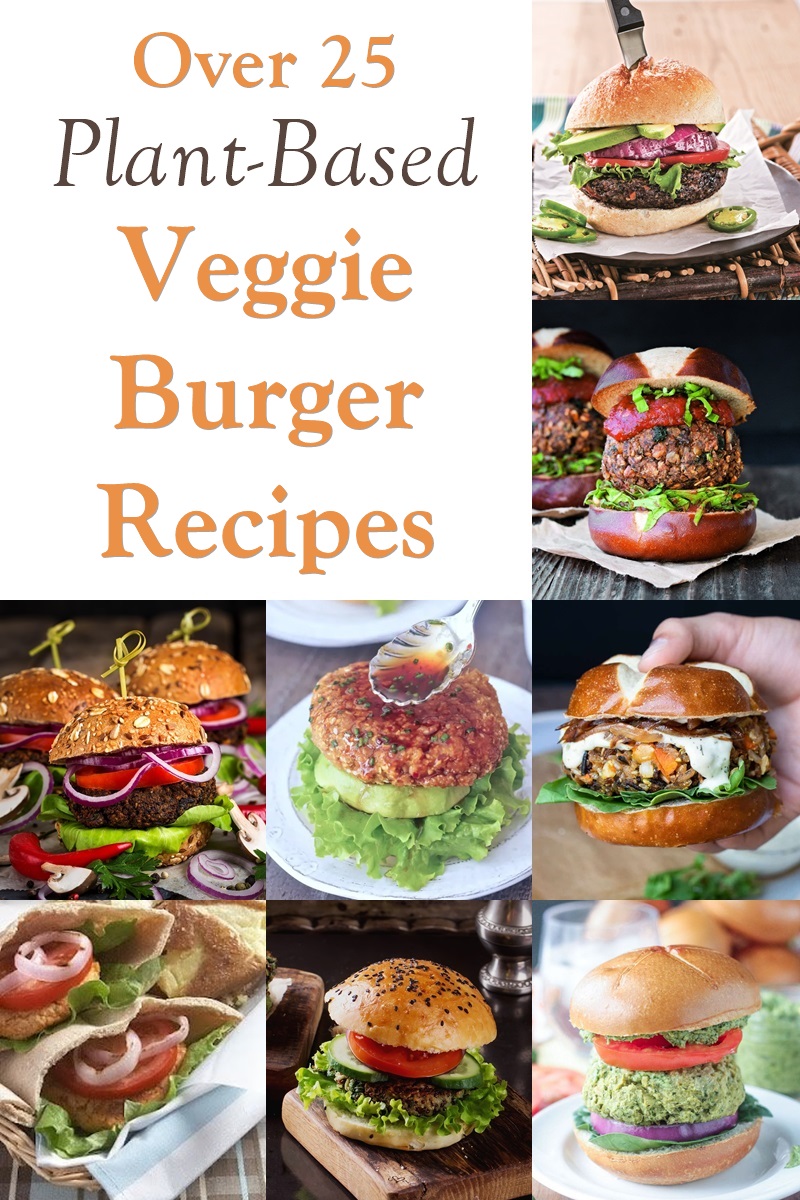 All of the following recipes are dairy-free, egg-free, plant-based, and vegan-friendly! I’ve also added gluten-fee, nut-free, and soy-free notes next to the recipes, as applicable.