A pivotal study revealed that a low-fat vegan diet may be much more effective in promoting weight loss and reversing other type 2 diabetes symptoms than the diet previously recommended by the American Diabetes Association (ADA). And a follow-up study seemed to confirm these results. It also found that the vegan diet appeared to improve glycemia and plasma lipids more than conventional diabetes diet recommendations. 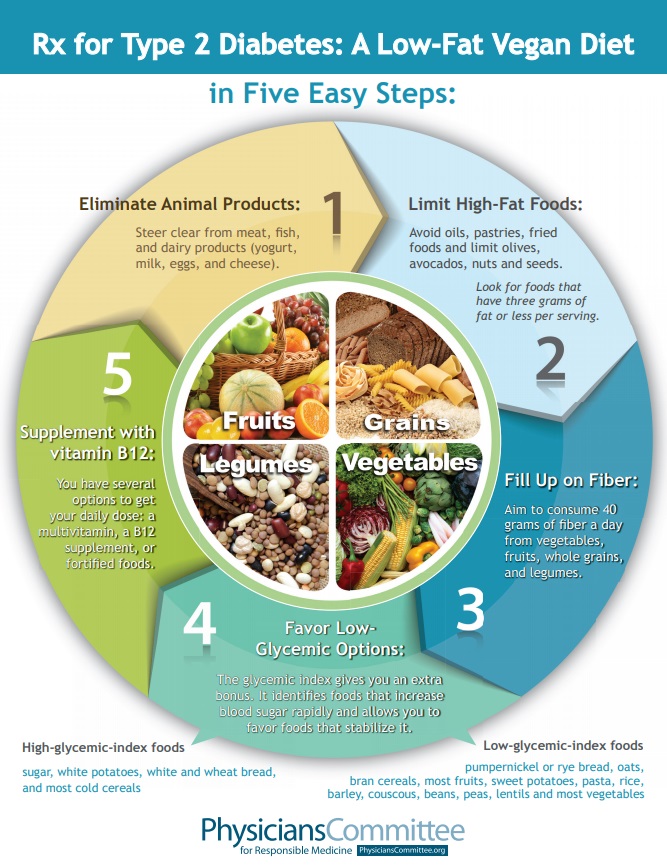 About the Vegan Diet Study and Diabetic Participants

In the initial study, researchers at George Washington University and the University of Toronto compared the ADA diet to a vegan diet, free of animal products. They intended to examine how the diets may reduce the need for drugs in diabetes management, kidney function, cholesterol levels, and weight loss.

Of the 99 diabetic participants, half were randomly put on a vegan diet and the other half on the ADA diet.  Vegan dieters followed a simple plant-based diet, avoiding meat and dairy foods.  They received roughly 10 percent of daily calories from fat, 15 percent from protein, and 75 percent from carbohydrates. However, their portion sizes were unlimited.  The vegan group was also advised to take a daily vitamin B12 supplement.

The ADA dieters had a few more rules.  They consumed 15 to 20 percent of calories from protein, 60 to 70 percent from carbohydrates and monounsaturated fats, less than 7 percent from saturated fats, and no more than 200mg of cholesterol per day.  Overweight participants within the ADA group were also advised to reduce daily calorie intake by 500 to 1,000 calories per day.

Dietary Results on Weight and Diabetes

After just 22 weeks, positive improvements in both groups were observed, but the vegan diet outscored the ADA diet in every reported category. Among all medication-stable participants, the vegan dieters enjoyed an average weight loss of 14.3 pounds (6.5kg), compared to 6.8 pounds (3.1kg) for the ADA dieters. And LDL cholesterol dropped by 21% in the vegan group, compared to just 9% in the ADA group.

The researchers also tracked hemoglobin A1c, a commonly used diabetes index of long-term blood glucose. According to the ADA, A1c levels should be should be less than 7 percentage points. The average participant began the study with an A1c of 8 percentage points. In participants whose diabetes medications remained stable, A1c levels dropped 1.2 points in the vegan group, but only 0.4 points in the ADA group.

Overall, a clinically significant improvement occurred in 69% of the vegan group and 46% of the ADA group. This was defined as either an A1c reduction of greater than 1 percentage point or any reduction in the use of diabetes medication. The lead researcher, Dr. Neal D. Barnard, expressed his hopes that these finding would help to promote dietary changes as the first line of defense against diabetes, rather than prescription drugs.

According to the American Diabetes Association, 20.8 million adults and children in the United States are living with diabetes. This is roughly 7 percent of the country’s entire population. Complications from the disease include increased risk for heart disease, stoke, high blood pressure, blindness, amputation, and kidney disease.

Further Reading on the Vegan Diet and Disease Prevention

This book is “arguably the most comprehensive argument in print for the human health benefits of the vegan diet.”  Readers have been intriqued by the untold information that Dr. Saunders presents on the benefits of a diet free of animal products.

The China Study: The Most Comprehensive Study of Nutrition Ever Conducted and the Startling Implications for Diet, Weight Loss and Long-Term Health by Dr. T. Colin Campbell, Thomas M. Campbell II

This real world, 20 year study gives a first hand account of diet as it pertains to overall health.  This must read covers valuable topics such as obesity, common cancers, how to eat, the medical industry, and the effect of excess weight on children.

Dr. Barnard was the lead researcher in both of the studies mentioned above. He initially released this book after the first study in 2006, but he released this second edition in 2018.