Meant to be firm, chewy, a touch toasty on the outside and soft inside, even professional bakers don’t always get bagels right. The dough is kneaded by hand, followed by a leisurely rise for up to 12 hours, after which they are boiled, and then finally baked in a scorching-hot oven. Bagel baking is truly an art when done correctly, and Bake’mmm Bagels may have created a masterpiece.

Bake’mmm bagels offers a delicious compromise – the bagels are frozen, but they differ from the other brands out there in one big way – they’re boiled, but then left unbaked.

Removing the packages of frozen bagels from my freezer on a leisurely sunny weekend morning, I was ready to see what these partly factory made, partly homemade lumps of dough could do.  Frozen together quite solidly, it took quite a struggle to separate a single one from its unbaked family. Pale and icy, it was hard to imagine that these would be ready to go in no time. 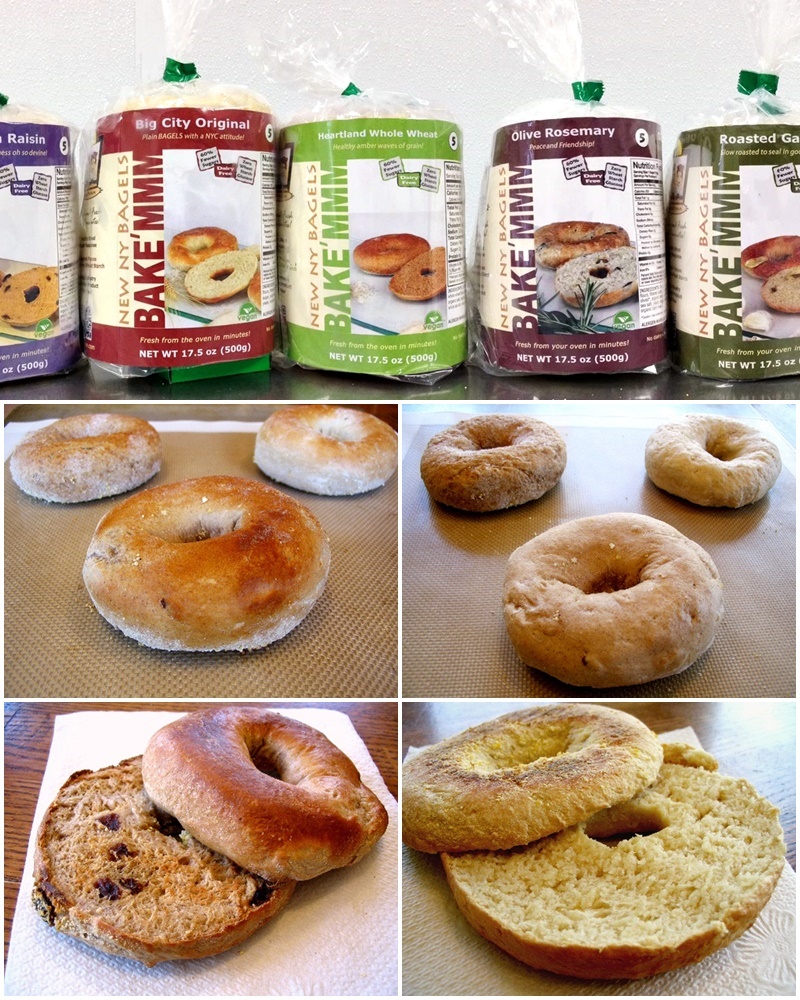 Opening the oven to release a pungent cloud of the yeasted scent indicative of fresh bread. The once rock-solid lumps had transformed into perfectly browned, authentic-looking bagels, and I could hardly wait to dig in. Slicing the first one I could get my hands around in half, I discovered a disappointing surprise inside. Although the exterior was fully baked, the innards still appeared mushy and moist. I threw it into the toaster in hopes of finishing up the undercooked insides. Proving to be a satisfactory solution for the time being. The bagels emerged looking much more ready to eat.

On a second occasion, I did try setting the oven higher at 450ºF for the full 15 minutes again. But the same results awaited me lurking within the center of each bagel. A frustrating flaw to be sure, but not a deal breaker. They still come out perfectly after a quick cycle in the toaster, no matter what which setting you choose for your oven. 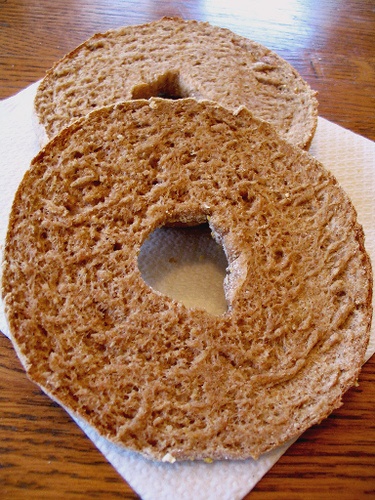 First up in the toaster was the Whole Wheat variety, sporting a lovely tan coloring through and through. The nutty whole grain smell had my mouth watering. Even unadorned, this bagel speaks volumes of deliciousness; Crisp on the outside, soft on the inside, and chewy all over. Hearty, satisfying, and dense, this is an excellent vehicle with which to deliver whole grains into finicky eaters. Just a tiny smear of margarine kicks up the savory, salty side of things quite nicely.

I’m a real sucker for anything cinnamon, so the Cinnamon Raisin bagels were calling my name from the moment they took up residence in the freezer. Smelling fantastic as soon as they emerged from the heat, one mere whiff was enough to start my mouth watering.

Lightly speckled with raisins throughout, it was just the right amount. Raisins aren’t my favorite in applications such as this, but there were few enough that they simply provided an occasional burst of tart, fruity sweetness without covering up the more subtle cinnamon flavor. Hoping for a cinnamon bonanza, I will admit that my first bite was a bit of a letdown. Wondering if there was some mistake here, I could have sworn that it just tasted like a regular, generic bagel. Slowly but surely, bite after bite, a gentle hint of spice crept up on the tip of my tongue, creating a quiet background flavor that permeates the whole dough. Nice for a mild, spicy treat that would be an excellent match with cinnamon peanut butter or cinnamon “cream cheese,” it was slightly underwhelming by itself.  However, it was very pleasant nonetheless.

Speaking of plain breakfasts, the last bagel on my hit list was the classic, Big City Original. This was pure, no-nonsense, yeast-raised bread, simple but perfect as is. Sure, it wasn’t exactly flavorful, but this was the most delicious plain bagel I can recall tasting.

Being such an excellent blank canvas, these would go with anything you fancy – sweet or savory. Even by itself, the soft, chewy texture makes for a breakfast that the most refined palates could crave without shame.

With all of the hard work done for you, I think that the requested baking time isn’t asking too much. Easily defined as a convenience food all the same. It doesn’t take a skilled baker to produce a fantastic, fresh bagel any more. I must warn you though: After trying this new breed of frozen bagel, it may be near impossible to return to the regular old rings that pale in comparison. 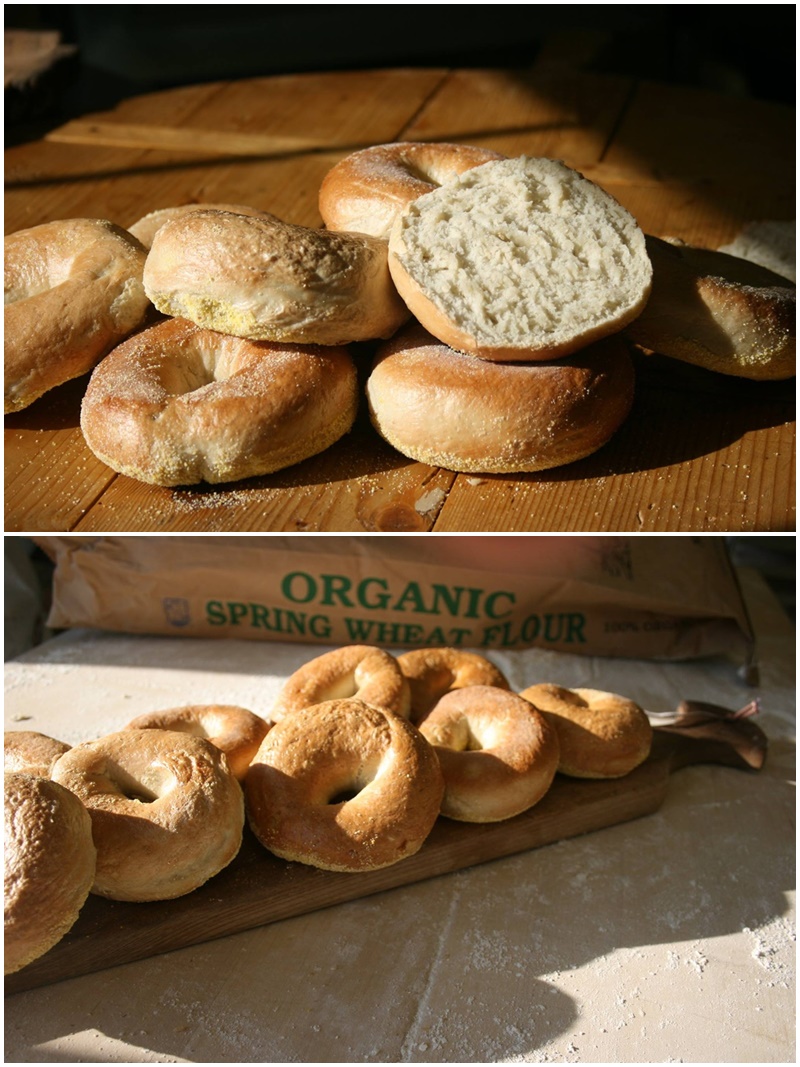 The Facts on Bake’mmm Bagels

Dietary Notes: By ingredients, Bake’mmm Bagels are dairy-free / non-dairy, egg-free, nut-free, peanut-free, soy-free, vegan / plant-based, and vegetarian. Nonetheless, always read the ingredient statement and check with the company on their manufacturing processes for all varieties if potential allergen cross-contamination is an issue for you. Processes and labeling are subject to change at any time for any company / product.

For More Product Information: Visit the Bageladies website at www.bageladies.com.