We’ve barely cracked the surface with the expansive line-up of Bob’s Red Mill Gluten Free Baking Mixes! Along with their long line of wheat-based baking mixes – we have lots of baking to do! 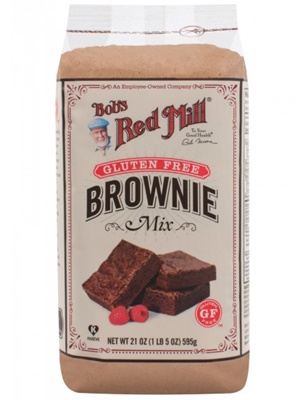 Bob’s Red Mill currently offers thirteen gluten-free baking mixes, including pie crust, shortbread, muffins… So far we’ve only trialled the following, but if you’ve given any a try – please let us know in the comments below!

We trialed this mix in two different kitchens as the prep appeared tricky. The batter is SUPER thick, and even pulled one of the beaters right out of my hand mixer. Luckily mine was just smooth and thin enough to coax into a 13 x 9 inch baking pan, though I wasn’t able to get it to completely touch those corners (our other tester ended up using a smaller pan, so they took longer to bake).

Fortunately, the results were quite good (for both kitchens). These brownies were a definite cross between a cakey and fudgy brownie, the two textures coexisting, yet not intermingling. They were what I might expect self-frosting cakey brownies to taste like. The flavor was rich, but more of a semi-sweet chocolate in taste that wasn’t too sweet. My husband noted a slight bitter taste, which I equated to a coffee-like influence. The texture was cohesive rather than crumbly (as so many gluten-free goodies are), which was nice. But this binding power made it slightly sticky and difficult to cut, despite being fully cooked through. 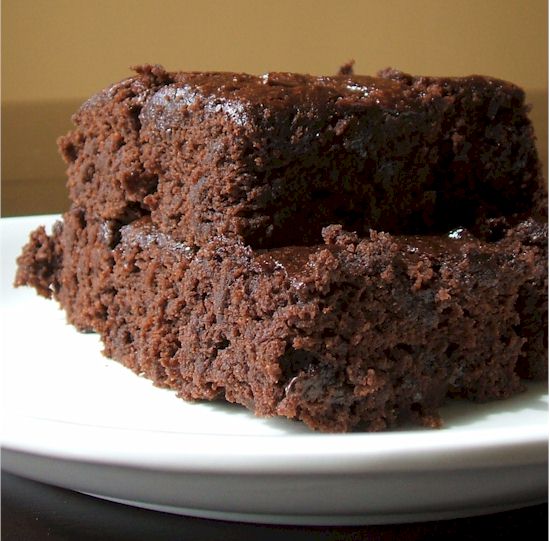 I prefer my brownies a bit more on the sweet and dense side, merely because I like chocolate, but not chocolate cake. My husband said he could tell these were a bit “different” (I hadn’t told him they were gluten-free), and said he liked them, but they wouldn’t be his first choice.

But unwilling to settle for our opinions, I cut them up into small, bite-sized rectangles and carted them off to a party for some outside opinions.  They sat alongside a tray of store-bought, super sweet, loaded with Symphony toffee chocolate, brownies. Next to that processed indulgence, I wasn’t sure if these natural and gluten-free brownies stood a chance. But to my great surprise there were a good handful of women who decided to sample my unknown brownies.  After their first taste, they each began frequenting my bowl of brownies (passing up the toffee variety completely), proclaiming they were (and I quote) soooo delicious.  My grandmother was also in attendance, and she asked if she could take some home after the party because she positively loved them!  Not a person there was gluten-free, nor did I disclose the “secret” behind these special brownies.

So while our household gave them a modest “good”, these gluten-free brownies went over like hotcakes at a gluten-loving affair.

It’s hard not to love freshly baked bread, but gluten-free bread can be tricky to bake from scratch. Hence the myriad of gluten-free bread mixes on the market, all of which claim they have “perfected gluten-free bread.” Even though I can (and do) eat wheat, I’ve taste-tested dozens of them. I hate to be the bearer of bad news, but most are nowhere near perfect. They range from darn good to good for gluten-free to downright unpalatable. But don’t worry, I have good news, too. To date, this is the best gluten-free bread mix I’ve tasted. I liked it, I really liked it. 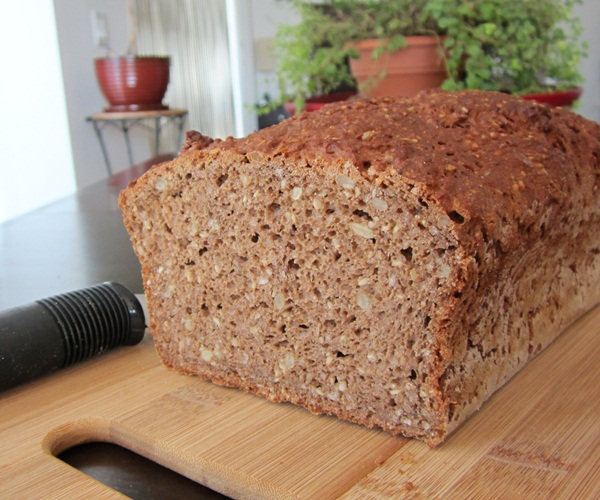 And I don’t mean “it was good for gluten-free bread.” Bob’s Hearty Gluten-Free Bread Mix makes a magnificent loaf of bread, period. Even my white flour-loving husband agreed! Fresh out of the oven, the texture of Bob’s whole grain gluten-free bread mix is spot on. Nice crust, tender interior, and generously spiked with whole grains and seeds. It has a mild hearty taste with rye-like undertones that works well for sandwiches / savories, and with sweet toppings (hello chocolate nut butter!) for toast. 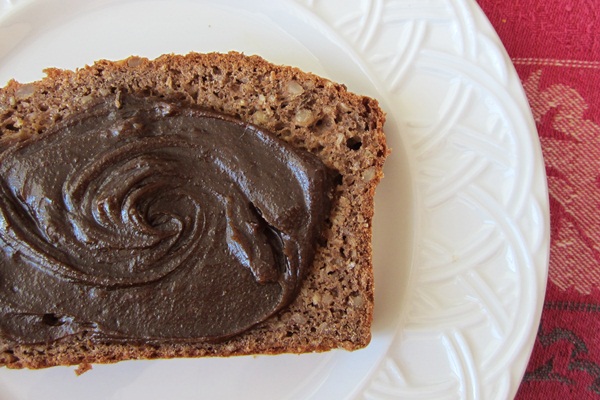 Like most gluten-free bread, and well, bread in general, it was best when very fresh, on the first day out of the oven. On day 2, it was still good, but best toasted. At this point, you could freeze the slices for toasting or sandwiches at a later date.

I didn’t trial this mix myself, but our helpful reviewer, Amy B., gave it a whirl:

This is a beautiful cornbread. It wasn’t light and fluffy, but it wasn’t grainy or chewy either. This is a hearty cornbread with a distinct corn flavor. The vanilla rice milk I used gave it a pinch of sweetness. I think you could add some sugar to make it sweeter, but it honestly did not need it. It definitely holds together like a bread and did not fall apart like a muffin might.

I served it with a piece of chicken and some salsa for a quick “Mexican treat”. Then I had another piece for dessert with some Earth Balance margarine on top. With the margarine melting into the piece, I was in cornbread heaven!

There are still so many amazing Bob’s Red Mill Gluten Free Baking Mixes to trial, and we will update here as we try them. In the meantime, feel free to comment with your own honest reviews if you have sampled any of them. 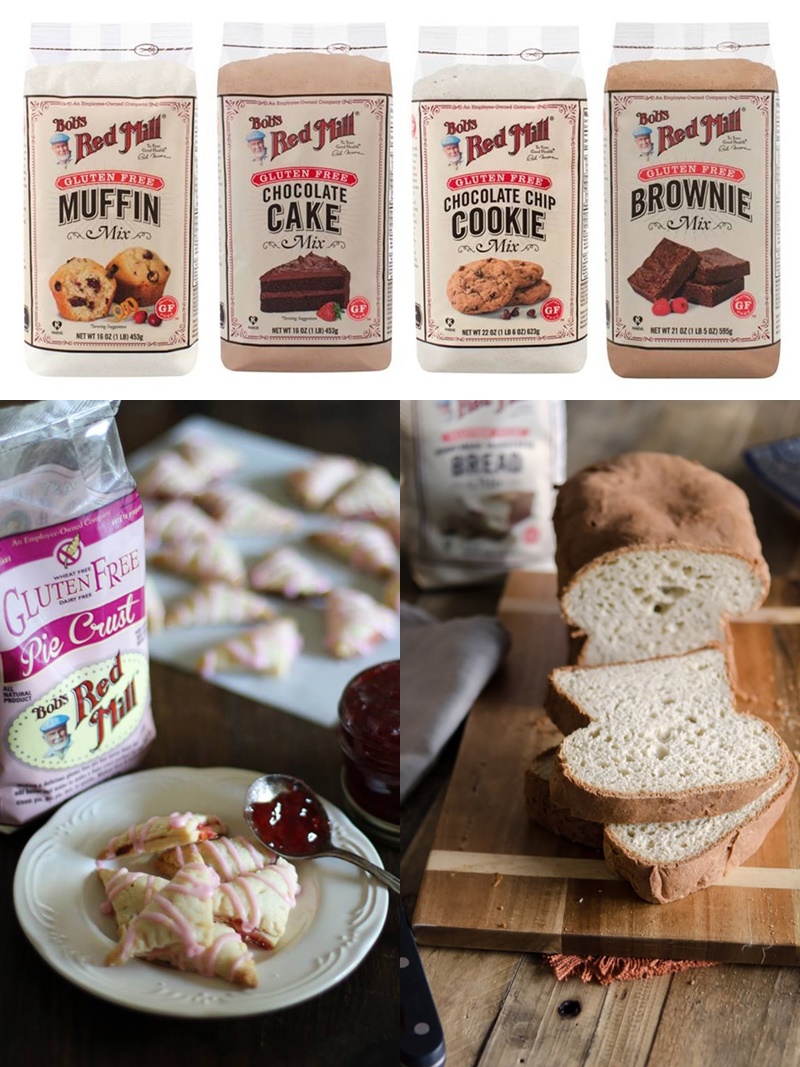 Dietary Notes: By ingredients, Bob’s Red Mill Gluten Free Baking Mixes are dairy-free / non-dairy, egg-free*, gluten-free, nut-free, peanut-free, vegan / plant-based*, and vegetarian. Select varieties are soy-free. Nonetheless, always read the ingredient statement and check with the company on their manufacturing processes for all varieties if potential allergen cross-contamination is an issue for you. Processes and labeling are subject to change at any time for any company / product.

*Though Bob’s Red Mill Gluten Free Baking Mixes are produced without eggs, several do call for eggs in the instructions. We tested the products with eggs, if called for.

Lots to chose from!

Their gluten free product line is expansive, and thus far we’ve only sampled a few varieties, but so far, so good. The brownies are unconventional with the world’s thickest batter and a result that is more like self-frosting cake than a traditional brownie. Nonetheless they were devoured with raves. The Hearty Whole Grain Bread is now my top pick for gluten-free bread mixes. And the cornbread is quite unique, but a scrumptious side bread that isn’t too sweet.