Rachel Rubin of Fit Fare and Rachel’s Bite, trailed an insane amount of recipes from this cookbook to prove it’s worthiness. 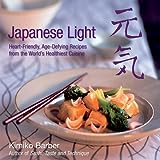 Based on the title, one might think Japanese Light by Kimiko Barber is a cookbook filled with diet recipes that happen to be for Japanese food. But this book is not filled with diet or lightened recipes. Nor is there any nutritional information provided, such as fat grams or calories. Japanese Light has 120 healthy recipes made with the fresh ingredients prepared with nourishing cooking techniques found in Japanese cuisine.

The philosophy of Japanese cooking emphasizes the use of all your senses. That philosophy combined with healthy cooking techniques yields incredibly tasty food. The foods used in Japanese cooking are naturally low fat and low in cholesterol. Much of Japanese cuisine is less dependent on meat and dairy products. Vegetables and fish are the stars of many wonderful dishes.

I have learned so much from this book. First of all, the simple techniques really allow the natural flavors of the food come through. Many recipes from other cultures are covered with sauce. And while there are recipes with sauces in this book too, the sauces are light and flavorful. The Steamed Eggplant with Spicy Miso Dressing is a good example of this. I had never made anything with miso (a thick paste) before and was not sure to expect. But it added such a unique flavor I look forward to experimenting with this ingredient some more.

Some of the excellent flavors in Japanese cuisine come from marinating. But don’t worry, because you can still prepare these meals quickly. The Seared Tuna Steak with Daikon Dressing (pictured below) calls for 30 minutes of marinating and is one of the most elegant meals in the book. I plan to prepare this the next time I want to show off because the results are restaurant quality. The Soy-Marinated Roast Chicken Legs is the only recipe I found that calls for 24 hours of marinating. It’s a wonderful weeknight dinner because the marinade is quick to assemble and then all you have to do the next night is bake in the oven.

The Japanese Burger with Daikon calls for letting the assembled patties chill in the refrigerator for at least two hours to let the flavors meld together. I made them one evening and let them sit over night for a quick dinner the next night. The flavor is so tasty that you don’t even miss you are eating a burger without any bun.

In addition to great techniques, I learned a lot about Japanese ingredients. Kimiko Barber does a good job of describing the Japanese pantry. Garlic, ginger and soy sauce seem to be in every recipe. I spent a fun afternoon at the Asian grocery store marveling at all the various types of each ingredient. It may seem intimidating to some, but if you are prepared to take some time and ask questions, you will learn a lot. I could find most of the ingredients such as mirin, rice vinegar and sesame oil at a regular grocery store, but I found it cheaper to buy the larger bottles in the Asian stores.

One of the things I like about this book is that it is very approachable. I have purchased other Japanese cookbooks before, but it seemed like all the recipes I wanted to make used very foreign ingredients. Kimiko Barber does a great job of using Japanese ingredients in familiar foods such as stir-fries, salads, omelets, burgers and coleslaw. Recipes such as the Grilled Corn with Teriyaki Sauce use simple American ingredients flavored in a new way. I tended to try these more familiar recipes in the beginning. The Chilled Tomato Somen was like an Italian spaghetti but using Japanese somen noodles. And once I had all my ingredients I found myself venturing out to more traditional ethic recipes such as the Shimeji Mushrooms and Gingko Nut Parcels and the Warm Tofu and Steamed Vegetable Salad with Plum Dressing. So this is a book you can grow with and I really like that.

Kimiko Barber’s Japanese Light is available from Amazon.com for $19.00. In the UK, the book is published as Japanese Pure and Simple and is available at Amazon.co.uk for £9.89.