Review by Alisa Fleming, author of Go Dairy Free ~ I often hear people profess that a vegan diet is impossible for them, simply because they “like food” and couldn’t imagine that a diet void of dairy, meat, and other animal products would actually taste good.  As they slog back lifeless, butter-laden mashed potatoes topped with greasy gravy, I stare at them in utter-disbelief and ask, “Have you ever heard of herbs and spices?” Well, Robin Robertson has, and she created a vegan cookbook to combat the flavorless claims of omnivores, Vegan Fire & Spice. More focused on the spice aspect than fire (you can turn the heat up or way down, depending on your temperature preferences), this collection of recipes takes inspiration from popular dishes around the globe. 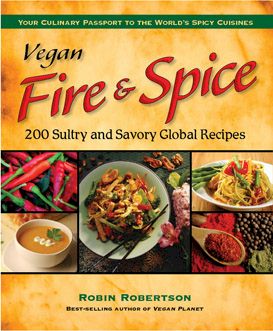 Just looking through the chapters I was in awe at the far reaching extent of Vegan Fire & Spice … Close to Callalou, Nigerian Peanut Soup, Majorcan Baked Vegetables, Turkish Eggplant, Moroccan Spiced Carrots, Vegetable Samosas, Vindaloo Vegetables, Fusian Asian Noodles, Hunan Fried Rice, Indonesian Coconut Rice … I could easily go on as this cookbook has around 200 savory recipes.  Yes, savory.  I have to admit, as much as I love dessert, I find the baked goods and sweets recipes often overwhelm vegan cookbooks.  Robin gets right to the point, offering tons of recipes for everyday meals.  And I do mean everyday.  While the flavors may be exotic, the ingredients are surprisingly accessible.  Most of the recipes can be whipped up using ingredients I readily stock in my pantry. Somehow Robin has fused dozens of international flavors with American staples, no easy task I am sure!

As for the layout, the cookbook is divided by region, The Americas, Mediterranean Europe, The Middle East & Africa, India, and Asia, with a recipe guide at the beginning of each regional section.  The recipes are listed as appetizers, soups and stews, salads and sides, main courses, or dressings, sauces, and condiments. With a well-stocked spice rack and pantry (rice, lentils, canned tomatoes, canned beans, peanut butter, etc.), and a week’s worth of basic perishables (bell peppers, potatoes, eggplant, onions, carrots, etc.), most of the recipes are just minutes away.  Some of the recipes do call for tofu, tempeh, or seitan, which are pretty easy to find, even at traditional grocers, and common staples in many vegetarian diets.  Since I don’t typically purchase these ingredients, I opted to stick with the all-vegetable recipes (of which there were many), but you can also substitute another protein (I know, it’s a vegan cookbook, but it’s still versatile!).

In our earlier years my husband and I loved to challenge one another with douses of hot sauce, but these days we prefer our meals filled with flavor, not heat.  Luckily, it really was easy to adjust the heat in these recipes, using just a pinch of crushed red pepper flakes when a ½ teaspoon was called for, for example.  Also, Robin uses little chili peppers at the top of each recipe to denote the natural heat (when unadjusted) of each recipe, ranging from one to three chili peppers.

One recipe in particular caught my eye right away, Callalou.  I first tried it many years ago on a trip with my husband to the Caribbean.  Never before had we tasted so many wonderful natural flavors as we did on that vacation. Yet, to our surprise, the food store that all of the locals and restaurants shopped at on that little island was smaller than a 7-Eleven.  In fact, you could say it was just a well stocked pantry … 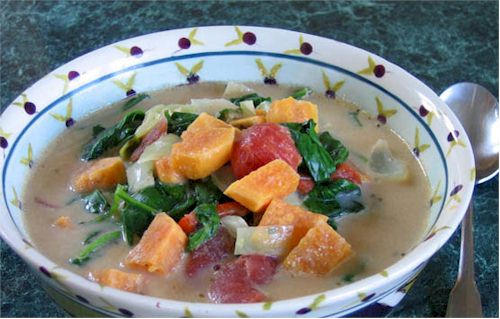 Close to Callaloo
Recipe from Vegan Fire & Spice, by Robin Robertson (reprinted with the author’s permissions)

The traditional Caribbean vegetable stew called callaloo is made with indigenous greens and seasonings that can be difficult for most of us to find at the local supermarket. This version is a close rendition using easy-to-find ingredients.

Heat the oil in a large pot over medium heat. Add the onion, garlic, sweet potato, bell pepper, and chile. Cover and cook until softened, 10 minutes. Stir in the tomatoes, spinach, chard, and broth and bring to a boil. Reduce heat to low and simmer until the greens are wilted. Stir in the coconut milk and season to taste with salt and pepper. Continue to cook until the vegetables are tender and the flavors are well blended, about 15 minutes.