Aptly named and subtitled, this cookbook could be likened to a comfort food bible for vegans.  While I have not yet viewed the first Vegan Vittles edition (Recipes Inspired by the Critters of Farm Sanctuary), I got the impression that Second Helpings was intended as an expanded version of the original.

The author, Jo Stepaniak is a true leader in the vegan movement.  She has written numerous books, including the Uncheese Cookbook, The Vegan Sourcebook, Table for Two, the Food Allergy Survival Guide… really, I could go on, but you can see all of Jo’s books here.  Nonetheless, I wasn’t expecting much from Vegan Vittles.  As a dairy-free consumer who is just dabbling in the vegan lifestyle, I was certain that the Uncheese Cookbook would be my favorite from among her collection.

To my great surprise, Vegan Vittles has emerged as one of my favorite cookbooks.  Oddly enough, there are several things that don’t quite flow with me in this book, much more so than most other cookbooks I have read.  Yet, the overall usefulness far outweighs any disconnect that I feel towards it.

Well laid out chapters stepped me through the day, starting with an intro to meat alternatives and finishing up with a good selection of “happy endings.”  While I have already tested a few of the recipes (Ultimate Chocolate Chip Cookies – pictured below, Macaroni and Cheez, Carrot Butter) I can’t even begin to tell you the recipes I am eager to trial.  Just a few on my list include: Muffins that Taste Like Donuts, No-knead Whole Wheat Herb Bread, Hot & Sour Pad Thai (no fish sauce?), Cheez Please Soup, Chickpea Oat Burgers, Spicy Peanut Sauce, Aunt Bunny’s Carrot Cake, etc., etc., etc. 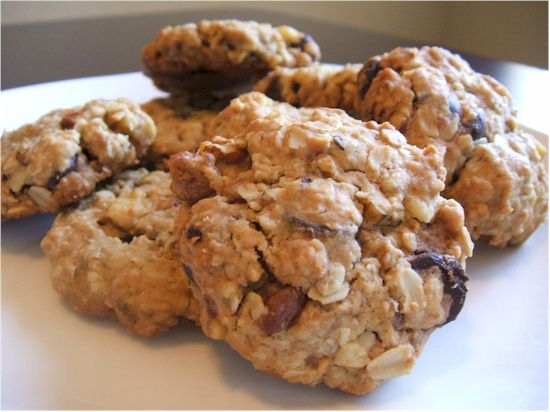 The recipes are all so simple, using easy to find whole foods.  The most exotic ingredients that I spotted were quinoa and miso, both of which can now be found at Trader Joe’s and in most major grocers.  Okay, the agar may take a look, but I did spot it in my local natural food store and Asian grocer.  Really, these are “grass roots” recipes using hoards of everyday “real” foods.  I think the fact that I could make so many of the recipes without having to make a special trip to the grocery store, was a real draw.

So I am sure you are curious, where were these disconnects?  Certain portions of the intro get a bit wordy, and I found my eyes wandering off on many occasions.  While full of useful information that I couldn’t get enough of (do you know how hard it is to find a list of GMO foods to avoid? And what about that wonderful explanation of egg alternatives?), many sections tended to drag on with less pertinent details.  Also, I was perplexed by the veganization of quotes throughout the book.  Really, there is no way for me to explain exactly what these were, I just found them a bit strange.  Finally, the recipes weren’t always spot-on.  I found the author’s taste buds to be more sensitive than mine, as I require a bit more flavor injected into my meals.  Also, I often had to adjust the moisture content.

So if the recipes didn’t always work perfectly, why did I like it so much?  Simply put, Vegan Vittles really is a fantastic primer for all of those basic comfort food recipes that I often miss.  As someone who is typically less than experimental in the kitchen, I have had a lot of fun “tinkering” with the recipes.  The very idea that I can successfully customize almost every recipe, has made this a cookbook that I actually use (of which, there are few).  Trust me, I am not a fabulous cook, but all of Jo’s recipes are so simple that they remove any fears I have in the kitchen.

Keep in mind that I do have hearty taste buds.  While Jo makes the vegan transition much easier, it helps if your diet already incorporates whole grains and veggies with fervor, rather than top ramen and wonder bread.  For the most part, the recipes stray as far as possible from white sugars and flours.  For most, this is a major plus, but those who are used to overly processed foods may find it a stretch … or a welcome change.  Really, who am I to say?

There is one other important thing to note.  Jo tends to reuse some of her recipes across cookbooks.  While each one contains a ton of unique recipes, there are always a few crossover recipes (such as the Mac & Cheese recipe above), another pet peeve of mine.  Yet, I found that Vegan Vittles contained the perfect collection of her recipes; a nicely sized section on cheese alternatives, and a good array of baked goods, full meals, snacks, and desserts.  While I didn’t count, I would guess that there are at least 150 home-style recipes to choose from!  If I could only pick one Jo Stepaniak cookbook, this would be the one.  Though we have our differences, Vegan Vittles will stay front and center in my cookbook collection!