When someone mentions ‘gluten-free’ the first thing that comes to mind is the notion of sacrificing bread.  Yet, unfortunately for the ever-growing community of gluten-free consumers, there are many other food enemies.  Some are obvious, while others are quite obscure.  One that rears its ugly head quickly is breakfast cereal.  Hot or cold, many of our favorites have a wheat component.  Even that once safe bowl of hearty oats is at risk for gluten cross-contamination.

This is where the people at Gluten-Free Essentials have stepped in.  Beyond an extensive line of baking mixes, they have come out with quick cooking rice cereals for breakfast!  Even with my passion for all food Asian, I hadn’t yet ventured rice for breakfast.

The first few mornings that I spotted the rice mixes in my cupboard I passed them up.  It was early, I was hungry, and I just kept thinking ‘they will take way too long to cook.’  My patience and energy in the morning isn’t usually at its peak, while my appetite is.

Of course, if I had taken even a second of time to read the package, I would have seen the “Ready in just 10 minutes” notation.  By the fourth day, I finally removed the Rise-N-Shine Blueberry for a closer look.  Ten minutes, that’s it?  Their promise held true, and then some.

I brought the two cups of water and two Tablespoons of butter (I used Smart Balance) to a boil, added the mix, and let it simmer for five minutes.  When the timer went off, I removed it from the heat, covered it, and started my morning chores.  I returned just a few minutes later to a fluffy pot of rice and plump blueberries, not bad!

It made a full four servings, and if you are like me with the additions, this can go even further.  However, on the first morning I trialed the blueberry rice solo for a pure taste-test.  Since I had scanned the nutrient label while the mix was boiling, I was quite shocked upon first bite.  The package stated just 6 grams of sugar per serving (very respectable), however, this was very sweet to my taste buds.  The blueberries ballooned to a healthy, if not somewhat jumbo, size, and had a true blue, yet surprisingly sweetened flavor. 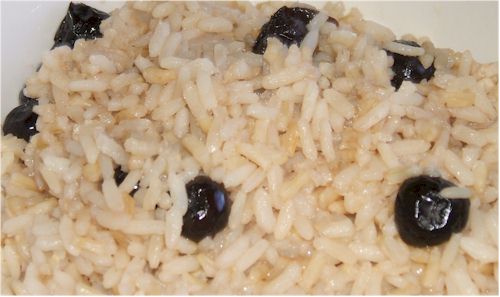 The rice separated well for a “grainy” breakfast cereal.  Though I may have mistaken this for white rice alone, it seems this is a mix of long grain white and brown rice.  The latter added just a touch (2g) of fiber.  Not quite as much as I like to see in my breakfast, but a good start.

On its own, the rice was a bit too sweet for my taste buds that early in the day.  However, some experimentation with the leftovers yielded breakfasts, which were very much to my liking.  On day two I added one Tablespoon of ground flaxseed, a dash of nutmeg, some freshly chopped applies, and a handful of chopped walnuts.  The flaxseed was the perfect component to bind to some of the sugar, and in my opinion, it alone completed the rice.  Yet, the apples and walnuts did offer some of the fiber and staying power I was seeking.  It was a delicious mix, pleasantly sweet, yet still low in sugar.

On day three, I took a different route.  With one serving of Blueberry Rise-N-Shine over low heat on the stove, I added a few Tablespoons of regular coconut milk.  The result was a creamy blueberry rice cereal that was positively delicious!  This is one flavor adventure I will trial again.  Perhaps with a sprinkling of coconut flakes to boot!

The Country Apple-Cinnamon flavor was every bit as easy to prepare as the Blueberry version and yielded the same fluffy, yet hearty, rice results.  Since my butter alternative supplies were exhausting, I used some coconut oil instead.  I was a bit concerned that this might alter the flavor, but it seemed to meld well.

I took my first bite, and was once again surprised…this time for the lack of sweetness.  The cinnamon was abundant (to my liking) and seemed to mediate the sugar perfectly.  Granted, there was still only 6 grams of sugar per serving, yet I was shocked by the difference from the blueberry rice. 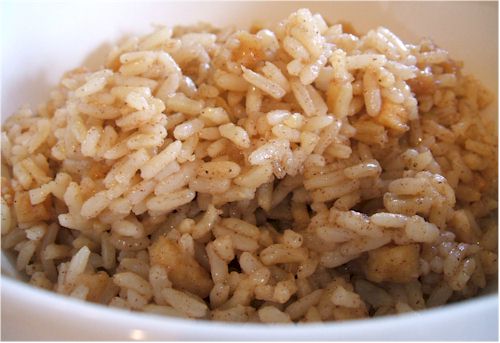 I took the advice of the package and added a handful of chopped walnuts (not advised for the nut-free version of course) and a few splashes of unsweetened milk alternative.  Since it lacks the sugary notes of the blueberry rice, a regular or vanilla milk alternative would also pair up nicely.

It was tasty, yet not as flavor packed as I had hoped.  Tons of tiny apple bits were sprinkled throughout, yet they were sometimes difficult to detect.  Plus, some seemed to have lost their flavor in the dehydration / boiling process.  I would almost prefer they use less apple chunks, but larger ones that can hold their own.  The overall flavor had an apple persuasion rather than contrasting bursts of apple.  For my taste, a few added organic raisins during the final steaming (after the rice has been removed from the heat) would perfect this mix.

I wasn’t expecting “performance” from a rice-based product, so the heartiness of this apple-cinnamon blend was a definite bonus.  I added just a handful of chopped walnuts (perhaps 2 tablespoons or less) and ½ cup of unsweetened almond milk (only 40 calories), yet it lasted me a solid three hours before I started to think about food again.  My cereal energy average is only two hours.

This is definitely a product I would recommend for various diets.  Both rice mix flavors are obviously very suitable for most “free-from” consumers, and relatively low in sugar.  Yet, this flavor boasts a good dose of cinnamon, which is well known for its sugar moderating properties, and often recommended for diabetics.