"Gluten-free" has certainly improved over the years.  In fact, there are many delicious mixes and recipes for making muffins, quick breads, and cakes that could easily fool gluten guzzlers.  Yet, the elusive yeast-style bread is still a tricky one.  There are a home cooks and mix manufacturers who have formulated some pretty darn good ones, though they are always just a tad off.

The challenge is heightened when neither gluten nor yeast is used.  This is where Gluten-Free Essentials stepped into the picture.  They have come out with three Multi-Grain Bread Mixes: Original, Zest Italian, and Cinncmon Spice.  Overall, they still have some work to do in terms of performance.  However, the overall flavors were wonderful, and there were a couple of applications that worked beautifully.

I confess that gluten-free bread mixes have lured me in with their ease though.  For each mix, just add water and 2 eggs, then mix well.  Really, it is that simple and your batter is ready to go….

When I saw the Zesty Italian, I knew it was time to trial the daring Gluten-Free, Dairy-Free pizza.  There is a total of 3 1/4 cups mix in each bag, quite a bit.  I halved it, using just 1 1/3 cups water and 1 egg, saving the rest of the mix for later.  It still made a generous single serve pizza (we split and added a salad) and two mini loaves, the size of jumbo muffins.

We cooked our crust for 13 minutes, put the topping on, and cooked for 12 more.  I would cook it for a solid 20 minutes or more next time, with just 5 minutes of cooking with toppings.  Though it felt finished to the touch, the sauce soaked right in upon slicing, making for a very mushy core.  The first few bites were ideal in flavor and texture, but as the sauce reached the inner crust, mush ensued.  I think if you ensured a very crispy outer crust prior to topping, or just topped it with some garlic and olive oil rather than tomato sauce, the finished product would retain more structure.  We both gave it an A for taste, B- for texture, and a C for performance, but overall, they have something. 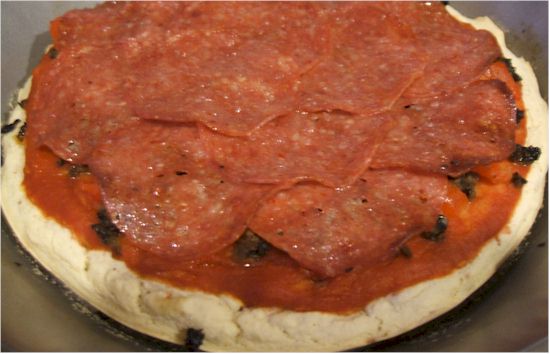 The mini loaves evidenced the true potential of this bread.  The pungent taste of Italian spices, and I believe onion and garlic gave these loaves some delicious fascination.  On its own, the texture was quite nice; yet, any moisture added to the soft part of the bread (including margarine) caused the mush effect.  In order to prevent this, we attempted to slice and toast a bit, but it was a bit crumbly for your standard toaster.  A toaster oven would have been welcomed.

They do seem to have the flavor, and from a taste appeal perspective, the texture down pretty well.  The problem seems to arise in the overall structure, a common issue with gluten-free bread.  However, I have been informed that they are diligently working on the formula.  Plus, the people at Gluten Free Essentials tipped me off to a better medium for this bread mix….

…wagels!  A cross between a bagel and a waffle is how it was described, and I must confess some accuracy in this term.  For the bag of original mix, we decided to make up some wagels and a few mini-loaves.

As easy as the first batch, some water, eggs, a good mixing, and viola – ready to cook batter!  I filled three mini-loaf pans ¾ of the way to the top, placed them in the oven, and heated up the waffle iron.  The “wagels” popped out perfectly, one right after the other.  The bread rose to insane heights to my surprise. Twice as tall as they were wide, I was certainly impressed. I enjoyed my wagels with just a bit of almond butter.  Of course, the traditional maple syrup or jam would be welcomed, but the almond butter along with the denser appeal of these made for a decently substantial lunch. The loaves were equally tasty.  Overall it was a nice mellow bread, venturing not too far toward white bread, but not as hearty as wheat.  There were the same textural problems, though the height of these loaves allowed me to slice off thick enough pieces for them to work in the toaster better.  However, even after a good toasting, the very center was determined to remain too soft.  I definitely preferred the wagels, which seemed to embody the perfect taste and texture. 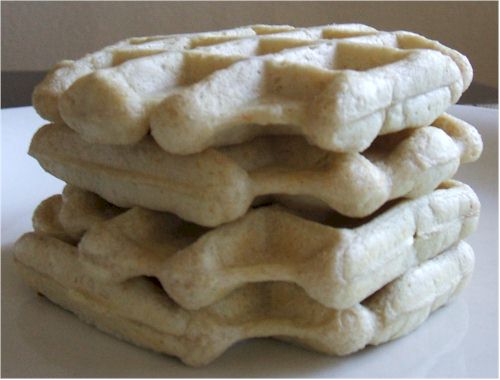 Since the wagels took only ten minutes to make (from bag open to on the table) and were by far the best medium, I heated up the waffle iron.  Half of the Cinnamon Spice batter was wagelized, and the other half was baked up as a dozen as is muffins.  On the package, they recommended adding walnuts or raisins and sprinkling some cinnamon and sugar on top, both of which would likely be excellent.  We each ate a muffin and a wagel on the spot, and flash froze some extras for toaster wagels and muffins-on-the-go.  How convenient is that!

The taste of this mix was absolutely heavenly!  My husband, who isn’t normally a big fan of cinnamon, said “Spicy!”  He amazingly liked the obviously cinnamon spiked blend as well.  A touch of sweetness graced the bread for an almost treat-like experience that I couldn’t imagine anyone not liking.

Oddly enough, the sweetness was my only complaint, but not because it didn’t taste incredible, but rather because it wasn’t represented on the label.  The ingredients and nutrition facts appeared to be identical to the other mixes, not even hinting at sugar anywhere on the package.  While I doubt much sugar was used, my eyes were able to verify some of the sparkly crystals in the mix.  Since I was trying to cut sugar from my diet for a few weeks, this was slightly frustrating.  Nonetheless, we both diligently downed our servings with smiles.

The muffin sizing turned out to be a second good medium for this mix.  Particularly since they were easy to slice in half and toast.  While each rose well, I was a bit surprised that each batch shrunk down a bit upon cooling, even though I went nowhere near the oven until the maximum cooking time was reached.  On the contrary though, they popped out of my silicon muffin tins with insane ease. 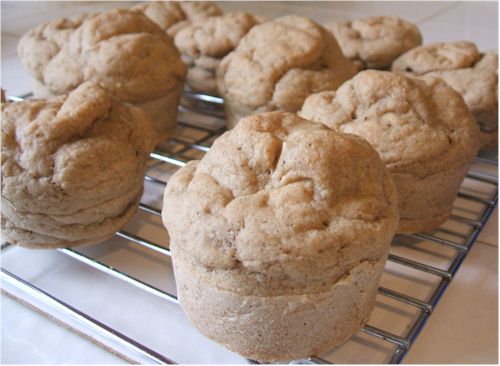 The wagels froze well, and easily reheated with two rounds in the toaster.  Likewise for the muffins.  They definitely weren’t as good reheated as fresh, but really what bread is?

Where to Purchase:  All GF Essentials baking mixes can be purchased directly on the Gluten-Free Essentials Website.