Please Note: These products were formerly known as TrailBlaze Bake-at-Home Mixes.  They are now nut-free, just Cranberry and Chocolate Chip are the Flavors, but still the same basic formula as the ones reviewed below.

By Alisa Fleming – I invested in five boxes of Matisse & Jack’s (to get the free shipping), so it seemed like a good time to do some experimentation!  The first batch, I went traditional, preparing the Cranberry Walnut Energy Bars as directed.  After all, I needed a baseline.

I made them vegan, but using the plain soy yogurt recipe for a “less sweet” bar.   Unlike Hannah, I loved the smell when preparing these.  That sweet, rich oat-y smell reminded me of making oatmeal cookies as a kid.  Of course, since I followed a different preparation from Hannah (using soy yogurt rather than applesauce), there could have been a slightly different aroma. 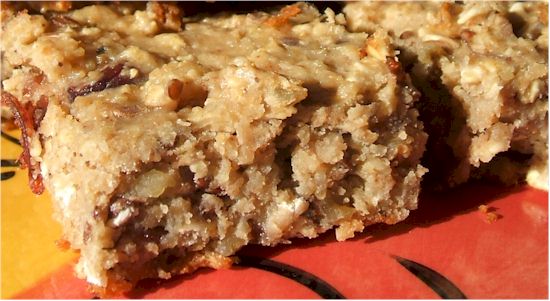 In five minutes, I had these in the oven, and in 30 minutes nine bars were ready for snacking!  They were cakey energy bars, almost muffin-like in texture (upping my curiosity for further experiments), but with a hearty does of oats.  As I had hoped, the “less sweet” preparation yielded bars that were just lightly sweet.  It was nice to not feel like I was using up my dessert quota for the day, as I do with so many energy bars (or muffins for that matter).  While there were tasty bits of chewy oats throughout, I wouldn't immediately guess cranberry.  The cranberries are sparse, and not whole from what I could tell.  Though the nuts were definitely detectible.  Overall, they were tasty and quite filling, but I would love to taste more cranberries.

For the second batch, I went with the chocolate chip theme and made Chocolate Chip Energy Cookies.  I followed the recipe from the Matisse & Jack’s recipe page, but used Earth Balance in place of the butter.  I could tell as they emerged from the oven that these weren’t indulgent, guilt-inducing cookies, but rather fun energy snacks as promised. 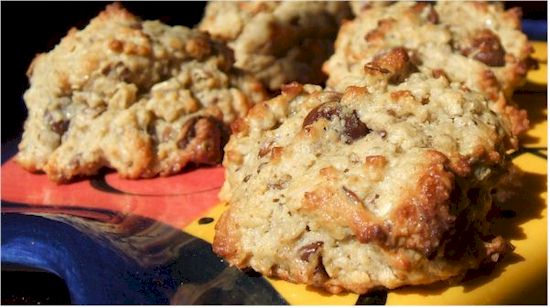 I snuck a quick nibble before packing them up to take to my parents, where I knew that they and my grandma would be awaiting one of my pre-Sunday dinner treats.  In my opinion, they were good, but I preferred the bar format.  While I love vanilla (I mean love) the one teaspoon called for overpowered a bit. I would reduce it to ½ teaspoon on any future runs.  Also, I must admit, I am a cookie purist.  While I eat almost exclusively hearty items, my cookies should have an indulgent feel and taste, with a good amount of moist chewiness.  These were more like a muffin/energy bar/cookie hybrid with crunchy little flax seeds.  Good, just not quite a cookie in my book.

Luckily, my family didn’t share in any of my criticisms, they loved them!  Between the three of them, nearly my entire batch was devoured.  My parents are health conscious, loving the taste of just about anything with oats, so I had a feeling these would pass their test.  However, my grandmother is a tougher sell.  Hearty is a fairly new word to her, but surprisingly, she adored these little morsels.

I will admit, if I can get over the “cookie” name, possibly renaming this recipe as Energy Trail Bites or something, they would be an awesome snack to pack along for a day of running errands or an ambitious hike.  Much easier for munching than a full bar.

For the third batch, I made the highly anticipated (by me) Cranberry Walnut Muffins.  My wait was not in vein as I think this was the best medium for this Matisse & Jack’s mix thus far!  I love muffins with some substance, and these fit the bill.  They were bursting with nutty, grainy goodness. 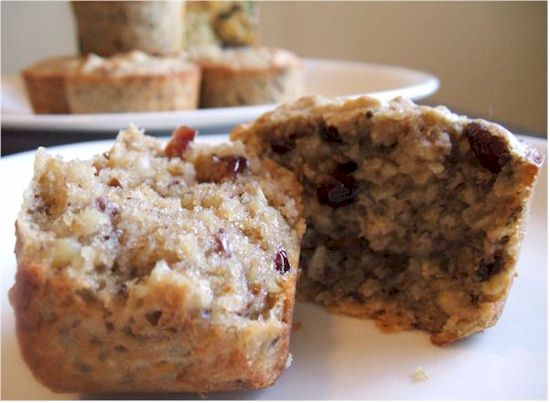 That being said, I did find the recipe a bit too sweet, at least for my taste buds.  I think the flavor is well suited to most taste buds, but in the morning, I like something a little less sweet.  Luckily, a nice spread of almond butter suited the muffins perfectly, keeping the sugars in check and offering a more fulfilling morning meal.

I followed the Energy Muffin Recipe on the Matisse and Jack’s site, making my own “buttermilk” from ½ cup of milk alternative curdled with 1 teaspoon of apple cider vinegar.  I would imagine that you could easily use an egg replacer on this one, possibly even 1-tablespoon of ground flaxseed plus 3 tablespoons of water.  For my personal tastes, I would likely reduce the maple syrup to 1/4 cup on the next round, adding in another tablespoon of oil to make up the difference. Also, I was amazed to find that the muffins nary rose ½ inch.  They remained quite flat.  Though they didn't taste overly dense in my opinion (after all, they are energy muffins), this really struck me as odd.  I took extra care not to over mix the batter, only a few turns just to moisten in fact, yet not a puff.  This was my only disappointment.

Nonetheless, I wouldn’t hesitate to trial a muffin version again with the TrailBlaze mixes.  Of course, there were more ideas to try first!  I finally decided upon the Peanut Butter Granola Squares for my fourth box.  However, the recipe on the Matisse and Jack's website called for another 1/2 cup of maple syrup I believe.  Since this mix already had 10 grams of sugar per serving from the evaporated cane juice, I saw no reason to add more sweeteners.  So I formulated the following recipe:

Really, they turned out perfectly!  They were crumbly (I think the maple syrup version may be as well), so you may want to add a tablespoon or two of liquid, but both my husband and I loved them.  They weren't as peanut buttery as expected, but had that nice peanut butter influence and an overall good flavor blend.  I would say these were the closest to "energy bars" of any of the Matisse and Jack's trials, including the actual energy bar recipe.  While I haven't had a granola bar in a while, these didn't strike me as suach.  Tasty and hearty nonetheless! 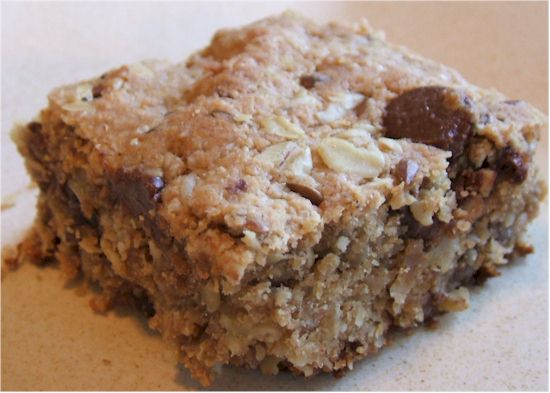 So, I have one box left.  Of course I ordered an extra of the Chocolate Chip.  Any suggestions for the last box?  Send me an email – alisa at godairyfree dot org if you  have any ideas!  Otherwise, it looks like muffins or more PB energy bars may be in order!

Where to Purchase: Direct online from Matisse & Jack's.  They are also popping up in stores, see the TrailBlaze Store Locator.