I lived in the mountains of Lake Tahoe for seven years, and wish that this hearty cereal had been available then!  According to my ranking system, the Mountain Madness line ranges from hearty to heartier to heartiest, with generous add-ins of nuts, seeds, and dried fruit.  Of course, since all of the ingredients are quite high quality, there really is no reason to skimp on any one in particular. 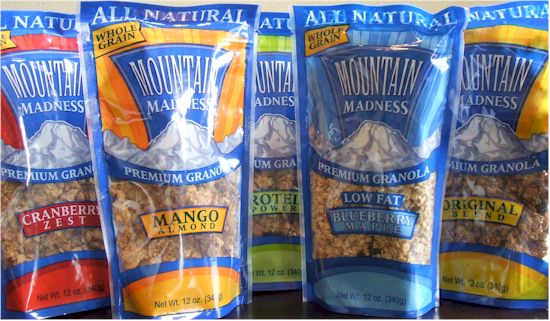 I think my only suggestion would be that this granola fully commits to its rich and rugged nature, rather than attempting to conform to “image” standards.  Granted, it is packaged in large re-sealable pouches, more about convenience than haute looks, but putting the serving size as ¼ cup was almost an insult to my intelligence.  Seriously, I don’t care how calorie packed (with healthy ingredients mind you) a breakfast cereal is, who in the world would eat just ¼ cup?

Okay, that minor complaint aside, I was immensely impressed with this granola.  We have trialed many, most likening themselves more to a dessert than a breakfast cereal.  However, Mountain Madness delivers the goods with real nutrients and staying power in five varieties to meet with varying taste buds..

While I was certain that the blueberry would be my favorite, the plain old “Original” turned out to be my all around winner.  Just lightly sweet for hearty granola perfection, I enjoyed the bold undertones of molasses and the warm hint of cinnamon.  But really, where this granola excelled above and beyond, was in the big clusters of oats, whole almonds, plump raisins, and scattering of nut and seed chunks throughout.  Chewy and crunchy, I really didn’t notice any crispiness that the rice crisps on the label might imply.  This really is a no frills, super-hearty, super-tasty, dense granola.  While it is perfect for my husband’s breakfast (most cereals and granolas fail to fill him up, he can down half a box in one serving!) this is an ideal snack and trail mix in my opinion.  I couldn’t think of a better snack to pack along on a hike. 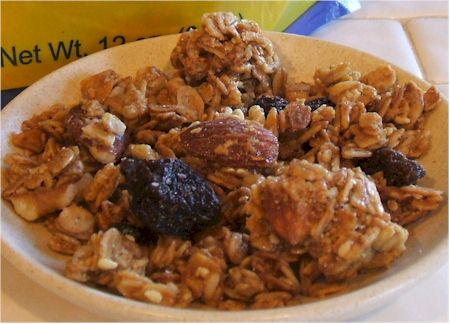 Really, blueberries and maple syrup, I was sure that this one would be the hands down winner.  While it was awesome, with bursts of super-sweet berries throughout, it wasn’t quite as substantial or bold as I would have liked.  Lighter, crispier (rather than crunchy) and just a bit sweeter, this one did strike me as more of a “popular” breakfast granola or cereal.  Lower in calories and fat then the other Mountain Madness varieties, the flavors were gentle, and could soothe most palates at the beginning of the day.  While the clusters themselves had just a hint of sweetness, the flavor-loaded blueberries do up the indulgence factor. While I did think it was one notch up from the Golden Temple Wild Blueberry granola, which my husband loves, I wasn’t sure that it was worth the extra cost, at least not for our household. 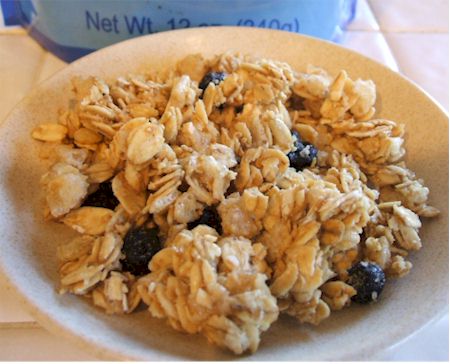 Taking on the flavors of a historically popular muffin, this granola combined cranberry and orange flavors with delicious ease.  The dried cranberries seemed to be all sweet (though not sugar coated) without a hint of sour.  These morsels combined with the perfectly sweet (not too much of course) orange infused clusters, created a flavor blend that just worked.  Focused on seeds, rather than nuts, it was one step down in heartiness from the Original.  Nonetheless, I wasn’t arguing with the generous load of sunflower, pumpkin, and sesame seeds throughout.  Actually, the pumpkin seeds were a surprisingly wonderful compliment to the cranberries (note to self).  The addition of “soy nuts” did add a nice pop to the texture, though I am not a big fan of their rather flat taste.  A little bit sweet and a little bit seedy, this ranks as a good stand alone snack and a suitable breakfast cereal in my opinion. 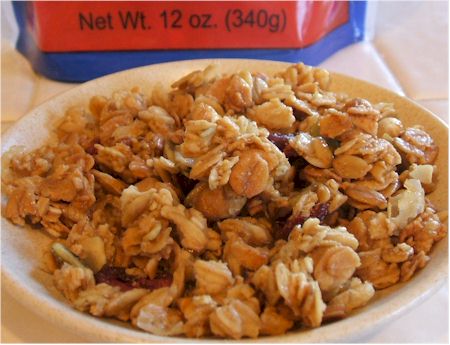 I think this one surprised me the most in terms of what I was expecting.  First off, while I had anticipated giving out another heartiest title, the Protein Power didn’t quite compare to the Original in density.  Second, it only boasts 1g more of protein per serving (5g total) than the other varieties.  Of course, you must multiply this by three to get a reasonable serving, but the other Mountain Madness flavors still seem to be suitable protein providers in their own right. To get that extra protein bump, the mix of seeds and soy nuts is supplemented with a bit of soy protein isolate.  Many treasure this ingredient for health benefits, though it isn’t viewed as such in our household.  Tastewise, the clusters had some sweetness, though they didn’t seem to hint at any one flavor in particular, and I didn’t get the cinnamon vibe that the ingredients indicate.  As a breakfast cereal or trail snack I would say not bad, but both the ingredients and taste didn’t wow me enough to add this granola to our line-up. 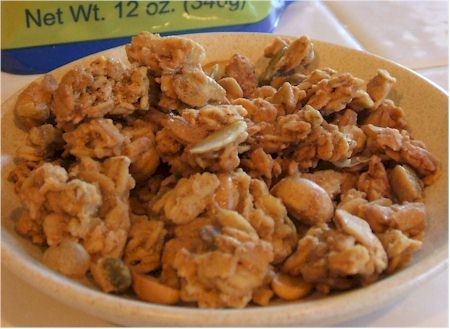 Ah, this one was a true treat!  The mango bites were sweet and delicious, pairing nicely with the clusters, whole almonds and hint of vanilla.  Upon reading the ingredients, I found one common link between this and my other favorite, the Original, a pinch of sea salt.  It is quite possible that this minute addition could have propelled the overall experience for my taste buds.  While the Cranberry Zest follows closely behind in my rankings, the Mango Almond had that slight bit of savory, which added a wonderful contrast to the light honey and mango ingredients.  Bold and able to hold its own, yet lightly sweet and subdued, I would be pleased to have this granola in my cereal bowl, or packed along for an afternoon snack. 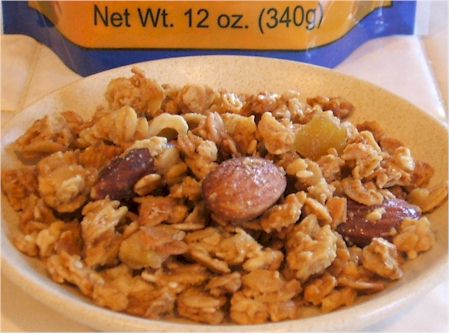 Where to Purchase: Mountain Madness Granola is making its way into stores (I even spotted it in the natural food aisle at my local mega-grocer), though they do not yet have a store locator on their website, nor direct sales.  However, if you can’t find it in stores or want to save a little money, Mountain Madness Granola is available on Amazon.    Do keep an eye on price with this granola, as you need not pay too much.  On Amazon (where you can get free shipping) it comes out to just $3.60 a box, but at my local grocer, it was on sale for $5.  Quite a pricing discrepancy!