Before I even dive into the quality and taste of this product, I must comment on the packaging.  Whoever designed the Speedy-Bake graphics for Gluten-Free Essentials is someone I would love to meet.  They are certainly in touch with their inner child and “artiste.”  Fun, colorful, and a touch mischievous, I couldn’t imagine any child not jumping with excitement upon spotting these vibrant baking mixes. 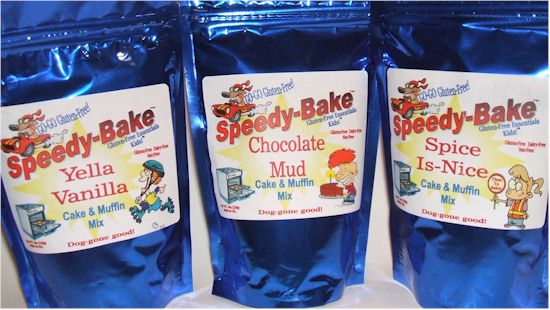 Unlike most kid-friendly products, the people at Gluten-Free Essentials go a bit beyond the packaging to address up and coming little bakers.  These mixes are slightly smaller in size, and offer very simple instructions for baking in adult sized ovens and in Easy-Bake toy ovens!  As for parental concerns of sugar-induced comas, not including the applesauce, this mix makes desserts with an unbelievably low 4 grams of sugar per serving.  Okay, I ate two servings at once, but you may be able to limit the kids to one.

To be honest, I am really hoping they continue to expand this Speedy-Bake line, and I don’t have kids.  Why?  Because they produce half the amount, and of course are a bit lower in price.  For example, these cake mixes result in one 8×8 pan rather than a 13×9 inch pan, or a full two layer cake.  I love the convenience of a baking mix just as much as anyone else, but I hardly ever buy one.  As most singles and kidless couples may be able to relate, they just make way too much cake!  I dread relinquishing such a large portion of a cake to the freezer where it may be sacrificed to the frostbite gods, when it slips mysteriously behind the stack of frozen fruits and veggies.

These Speedy-Bakes make just the right amount for one or two to enjoy over a few days, without having to freeze a bite!  No need to change the packaging though.  The bright color and comical characters somehow make the indulging experience that much more fun.

In the true spirit of an overwhelming trend gripping our society, I made cupcakes with the Yella Vanilla.  The temptation of pre-portioned servings into individual cakes that you can devour all your own is just far too tempting, don’t you think?

The instructions called for applesauce, butter, an egg, and water.  I used unsweetened applesauce and Earth Balance Buttery Sticks.  The people at GF Essentials have assured me that most egg alternatives will work very well with their mixes also, but I didn’t trial it on this round.  Though not specified on the package, as cupcakes, these only need about 18 minutes at 350º to reach perfections. 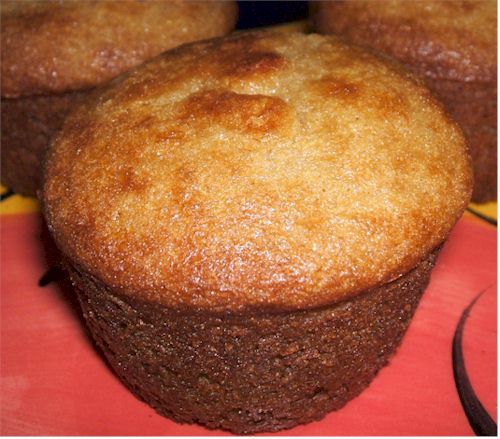 As I pulled them from the oven, the sugary vanilla fragrance reminded me of my own childhood baking with its simplistic, yet potent aroma.  I had greased the muffin tin well, very well, so I thought.  Yet, I quickly forget, gluten-free goodies love to stick to the pan.  Luckily, there was minimal damage, but it was a noted reminder to either use liners or double the grease on my next cupcake round.

The mix made six very generously sized cupcakes, or should I call these muffins?  They were delicious.  The flavor and neutrality of white cake was taken up a notch with a noticeable dose of vanilla.  I liked the potential versatility.  This mix would work wonderfully with just about any frosting, or even with a few handfuls of mini chocolate chips thrown in for a birthday party favorite.  It could also sub into cake mix inspired recipes for gluten-free desserts, such as pineapple upside down cake!  However, both my husband and I agreed that on their own, these were more like muffins than cupcakes.  Though soft and flaky, they had more substance and moisture than your traditional fluffy white cake.  Mind you, we weren’t complaining in the slightest.  I would easily prefer these to Duncan Hines any day.

Since we were heading out for a family dinner, I opted for some variety and made both the Chocolate Mud and Spice Cake mixes, but once again, I gave into the cupcake trend!  Using the baseline frosting from the Lychee Cupcakes with  Raspberry Frosting from the dessert cookbook My Sweet Vegan, I frosted them with a rich strawberry frosting, using real organic strawberries!  Sorry, no photo of the final gems, as I had to frost them once we arrived (I haven’t invested in one of those cupcake carriers as of yet), and forgot my camera! 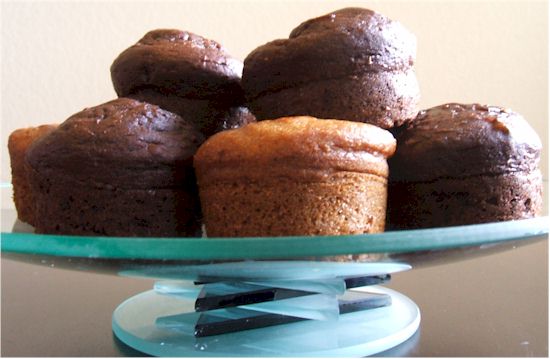 Before dinner, my father and grandmother decided to take a cupcake sample, dad going for the spice and grandma eagerly saying yes to the chocolate.  When I asked my dad if he liked it, he just held up his hands and said, “it's gone isn't it?”  After my grandmother had finished, I hit her up for some feedback.  She responded with a "well, I don't know how it was, there's none left!" Like mother like son I guess.  Anyway, they were obviously a hit, as both were pleased to take a few for keeps before I packed them up to take home.  In fact, of the dozen I brought for four of us, I only left with two!

The chocolate version seemed a bit more chocolatey than the other GF Essentials products.  It was slightly richer, but still quite kid-pleasing as it wasn’t overly grown-up or refined.  Overall, it was what I would describe as a relaxed cake; it could hold its own as cupcakes or a birthday cake, yet still be comfortable in the roll as a chocolate muffin (with a few choc chips sprinkled on top of course!).

When baking, something went slightly awry with our spice mix.  Though we followed the instructions to the T, double-checking each measured item before it went into the mix, the batter turned out way too thin.  I think perhaps the bag was just a touch short in contents by error.  So, they had a bit of trouble rising and baking through, while the chocolate cupcakes thrived.  All was not lost though.  The spice version has a very mellow taste, not as much as I would have liked, leaning more toward a yellow cake with some added oomph.  Nonetheless, when I think of young ginger-averse taste buds, this is probably a good thing.  Of course, the cake/muffin could also be adorned with a cinnamon-vanilla glaze, which I am sure would dress it up a bit in the spice category.  Our strawberry frosting made for an excellent combination, but it did accent more of the vanilla flavor in the little cakes.

I will definitely say, they were pretty tasty little treats, and my family had no idea they were gluten-free.  However, muffin is accurate. Though they may pass as cupcakes, they had that denser crumb feel.

Where to Purchase:  All Speedy Bake baking mixes can be purchased directly on the Gluten-Free Essentials Website.