The fruit-filled, all-natural Pancrepes were a surprise hit. Tender, perfect pancakes wrapped around a slightly syrupy fruit topping and ready in just 2 minutes. We loved that the sugars weren't too high (for a breakfast treat), they didn't require syrup or any other topping, and it was nearly impossible to detect the free-from nature. But the French Toast Sticks were a bit more in-your-face gluten-free. Not bad, but we'll stick to sampling our way through the deliciously dairy-free, gluten-free, nut-free, and soy-free Pancrepe varieties.

I’m a simple girl when it comes to breakfast, usually whipping up a smoothie to get my day started. It’s the rare occasion that I take the time to make pancakes or French toast. Apparently I’m not alone, as the convenient Ian’s Frozen Breakfast Foods have become a staple in many allergen-free households. 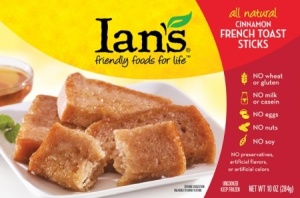 To note, we aren’t sure if the fruit Pancrepes have been discontinued (we’ve seen them, but they’re no longer on Ian’s site), however they have Sausage Pancrepes still listed, which are dairy-free).

Labeled as No Gluten, Milk, Nuts, and Soy and made with all-natural ingredients, these Pancrepes were a surprise hit! Tony and I weren’t expecting much, but we gobbled up every last fruity bite in minutes. With two servings per box, we downed the strawberry one morning and the blueberry the next. They weren’t as high in sugars as they tasted (9 to 11 grams per serving, respectively) and didn’t really need any type of topping since the syrupy fruit comes rolled up right inside.

To make sure they were a true convenience, we trialed the Pancrepes using the microwave instructions. Ready in just two minutes, they held together nicely, and weren’t the least bit soggy. I would still count the Pancrepes as an indulgence, but was seriously impressed with how perfect the buttermilk-like pancakes tasted from frozen, and considering that they were gluten-free (note that I’m not strictly gluten-free, and didn’t find them “off” in the least bit; Tony is gluten-free).

Oh yes, and I cheated – I had a terrible time trying to photograph the Pancrepes, so I’m sharing Ian’s photo. It is a fairly accurate image, just a little more polished and with some extra plump blueberries thrown in. 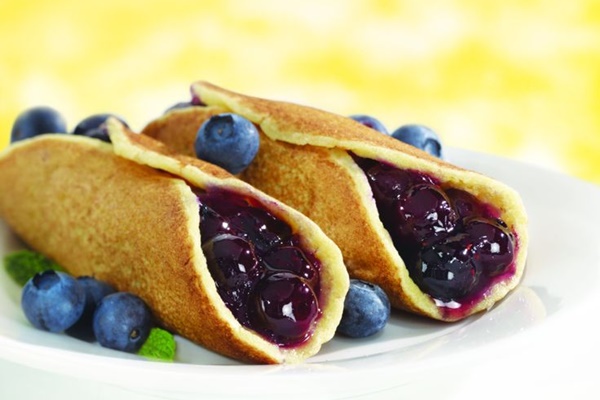 The French Toast Sticks have an extra allergen-free bonus – they are made without eggs, too! But alas, this selection from the Ian’s Frozen Breakfast Foods line-up didn’t dazzle our taste buds as much. They were okay, but won’t be on our repeat list.

The smallish, but filling sticks (some even looking like half of a mini slice of toast) were a bit “bready”, and the slightly chewy and thick gluten-free vibe was detectable. The flavor was fair, but a little flat. We both felt the flavor and texture required a maple syrup dunk, which definitely left me feeling a bit of a stomachache post breakfast. Great concept; Ian’s is definitely on to something, but I would love to see them revisit the bread that they use.

Note that oven-only prep is recommended on the French Toast Sticks (no microwave), but luckily, they take just 8 minutes in the oven. We baked them for a little over 10 minutes since I was preparing two servings. 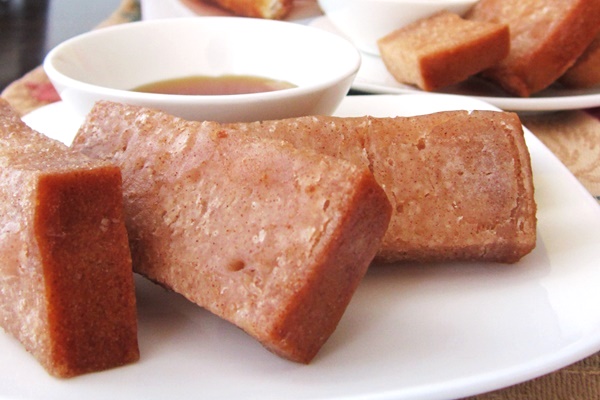 Certifications: Ian’s Frozen Breakfast Foods are labeled as “no gluten”, though I didn’t note a certifications.

Dietary Notes: By ingredients, Ian’s Frozen Breakfast Foods are dairy-free / non-dairy, gluten-free, nut-free, peanut-free, and soy-free. Select varieties are vegetarian, vegan and egg-free. Nonetheless, check with the company on their manufacturing processes for all varieties if potential allergen cross-contamination is an issue for you. Processes and labeling are subject to change at any time for any company / product.