These kid-friendly entrees may be free of gluten and top allergens, but they certainly aren't void of flavor. Do they taste free-from? Yes, the bread is notably gluten-free (though the pasta is impressively delicious!) and though the cheese alternatives used have American and mozzarella vibes and both do melt, they still aren't dairy cheese. Don't expect spot on, but do expect pretty darn good. Just be sure to avoid the microwave instructions!

When those childhood cravings for familiar foods like Mac & Cheese, Pizza, and Corn Dogs kick in, Ian’s Frozen Entrees may be worth tossing into your cart. All that we’ve trialed are free of dairy, gluten, eggs, nuts, and soy (even their pizzas have been updated to soy-free, dairy-free cheese alternative), but are surprisingly satisfying. 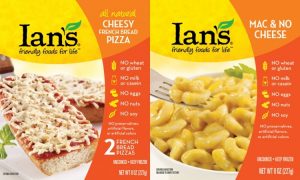 We previously trialled Ian’s chicken nuggets and frozen breakfasts – after those positive experiences, we were excited to dive into the Mac and No Cheese and French Bread Pizza!

To note, prior versions of Ian’s Frozen Entrees used a soy-based cheese alternative, but they have since switched to one that is free of the top 8 allergens (including soy), but contains cornstarch.

They offer a few dairy-free Pizza varieties among the Ian’s Frozen Entrees, and thus far, we’ve sampled the Cheesy. In the microwave, it was a bit of disaster. Sections of the cheese alternative that melted went all the way to liquefied, while other sections were barely cooked. There didn’t seem to be a middle ground with this full-on convenience. But in the oven (took 19 minutes – 23 minutes as instructed on the box would have led to liquefied again!), the results were much more appealing. 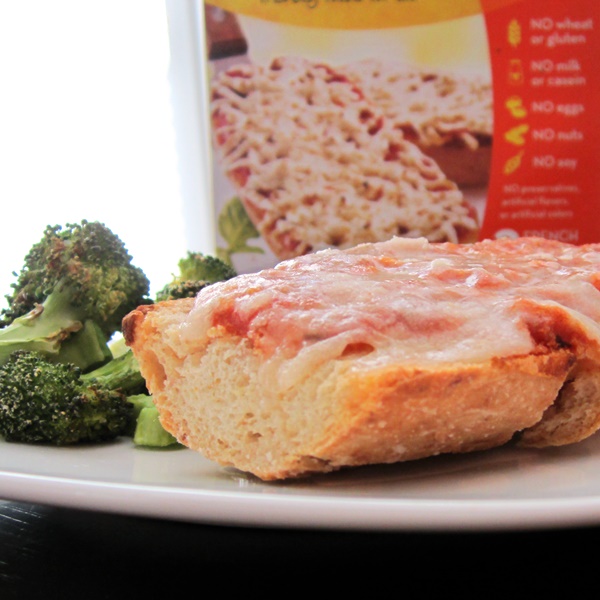 As an added bonus, the time and temp in the oven were perfect for roasting broccoli right alongside the French Bread Pizza – a full meal deal!

Overall, it was a “like” not a “love”. The Cheesy French Bread Pizza needed toppings (I would add some or trial their other varieties), and such a big, thick slice of gluten-free bread needed to be tempered with more sauce or even some marinara for dipping. It was a bit dry and unctuous. That said, it showed real promise. With a side dip and a smattering of toppings, I would be fully satisfied.

Pizza is more my thing than mac and cheese, but I did find the overall taste of this frozen food to be quite good. I only had one to sample, and the microwave is my first trial. Once again, a disaster ensued. This time, the cheesy sauce bubbled over and went everywhere (yes, I followed the directions specifically). And if you know dairy-free, soy-free cheese alternatives, then you know how sticky it can be! I salvaged enough of the cheese sauce to trial, but it still seemed like the dish wasn’t saucy enough. Take away: use the oven directions. 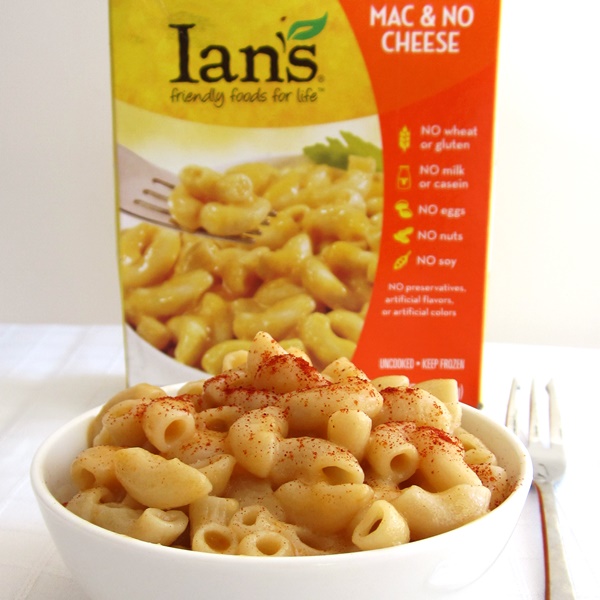 Still, the sauce had a pleasant, very mild flavor that wasn’t overly cheddar. It would likely appeal to young taste buds. I adorned mine with a sprinkle of smoked paprika to give it a hint of homemade. The pasta cooked up perfectly – a true feat for gluten-free noodles. They were larger tubes than the Kraft variety, giving a more substantial vibe.

Friend of GDF, Amy B. shared her thoughts on this variety:

This is a kids meal- let there be no mistake about this. Three pieces of chicken, a spoonful of corn and mashed potatoes, and a tiny portion of chocolate cake. Wouldn’t even wet my appetite- but perfect for a 5-year-old! I tried the chicken first. It was a great chicken nugget! This could be served to ANY child with no way to tell it is gluten free. The mashed potatoes had a slight onion flavor to them that could annoy a child who doesn’t like seasoning, but I liked them. 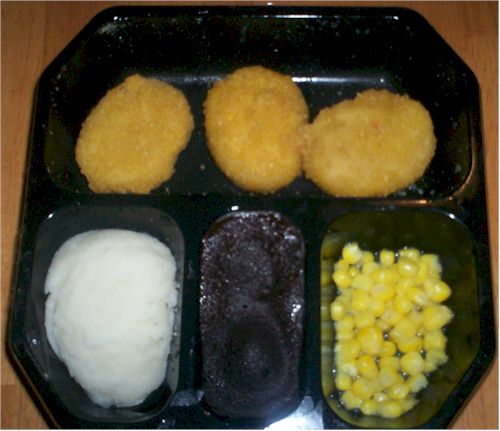 The chocolate cake seemed kind of a waste, the texture was a bit grainy and the flavor a little on the fake side. I didn’t try the corn- how bad could it taste? My daughter gave me her verdict- an empty dinner tray. She loved it. She is a pretty picky eater and will let me know as soon as it’s in her mouth if she doesn’t like something, so this was a hit for her.

Certifications: Ian’s Frozen Entrees are labeled as “no gluten”, though I did not note a certifications.

Dietary Notes: By ingredients, Ian’s Frozen Entrees are dairy-free / non-dairy, egg-free, gluten-free, nut-free, peanut-free, and soy-free. Select varieties are vegetarian and vegan. Nonetheless, check with the company on their manufacturing processes for all varieties if potential allergen cross-contamination is an issue for you. Processes and labeling are subject to change at any time for any company / product.