The Holiday flavors of Larabar are out, and I realized that it was about time for a full review update … 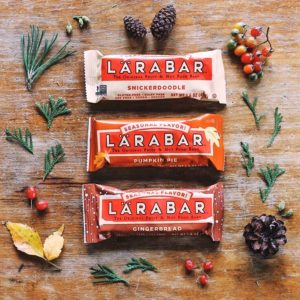 Larabars are a staple in our home. Truth be told, it isn’t because they are the best dairy-free bars that we’ve ever tasted. Rather, they are a wonderful combination of just the right attributes:

I’ll add to this review as we trial more flavors (they have over 20!), but below are the notes on the Larabar varieties we have taste-tested (and remembered to take notes on!) to date. 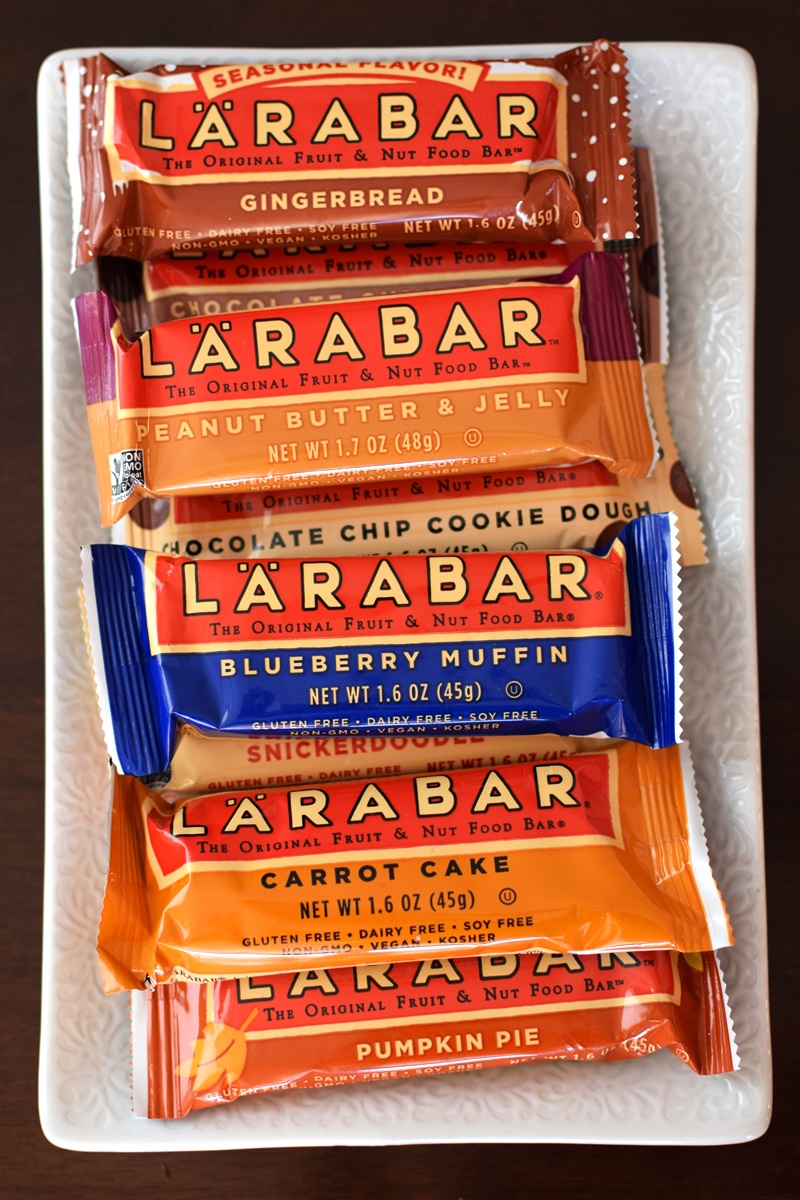 The flavor has a definite PB & J vibe with an interesting flavor twist since they used cherries. I like peanut butter, so I was a fan of the sweet-savory and slightly tangy contrast in this one. Tony is more of an all-sweet guy, so he wasn’t a big fan.

I think they upped the date-to-cashew ratio at some point with this flavor. It used to be a go-to for us, but now seems much heavier in dates. When I asked Tony to guess the flavor, he said “chocolate prune?” He liked it, as did I, but cookie dough it isn’t. It’s a tasty date bar, tempered by the neutral cashews and enhanced with some delicious chocolate chips (though we would love more!).

This is one of Tony’s favorites, but when I told him to guess the flavor, he thought it was apricot. Even after I told him it was blueberry, he didn’t believe me! I was biased in tasting the blueberry because I knew which flavor it was. That said, I liked it, too. I definitely wouldn’t have guessed blueberry muffin either, but it was sweet, fruity and cohesive in flavor.

I loved the generous smattering of chocolate chips in this Larabar – who wouldn’t? But the dates overwhelmed the flavor so Tony couldn’t guess brownie. He actually had “no idea”, and said it wasn’t his favorite. I think they do need more cocoa to qualify this one as brownie, and the sweet date aftertaste could be tamed a bit.

On first bite, this Larabar flavor did taste a little “off”, but then the pineapple and cinnamon flavors emerge for a more potent deliciousness. The raisins actually work in this, but the carrots are so far down the list, that we didn’t even taste them. A bigger carrot infusion and perhaps cashews instead of almonds and I think this one could hit the mark. But for now, Tony would prefer that I buy him some of the other flavors. 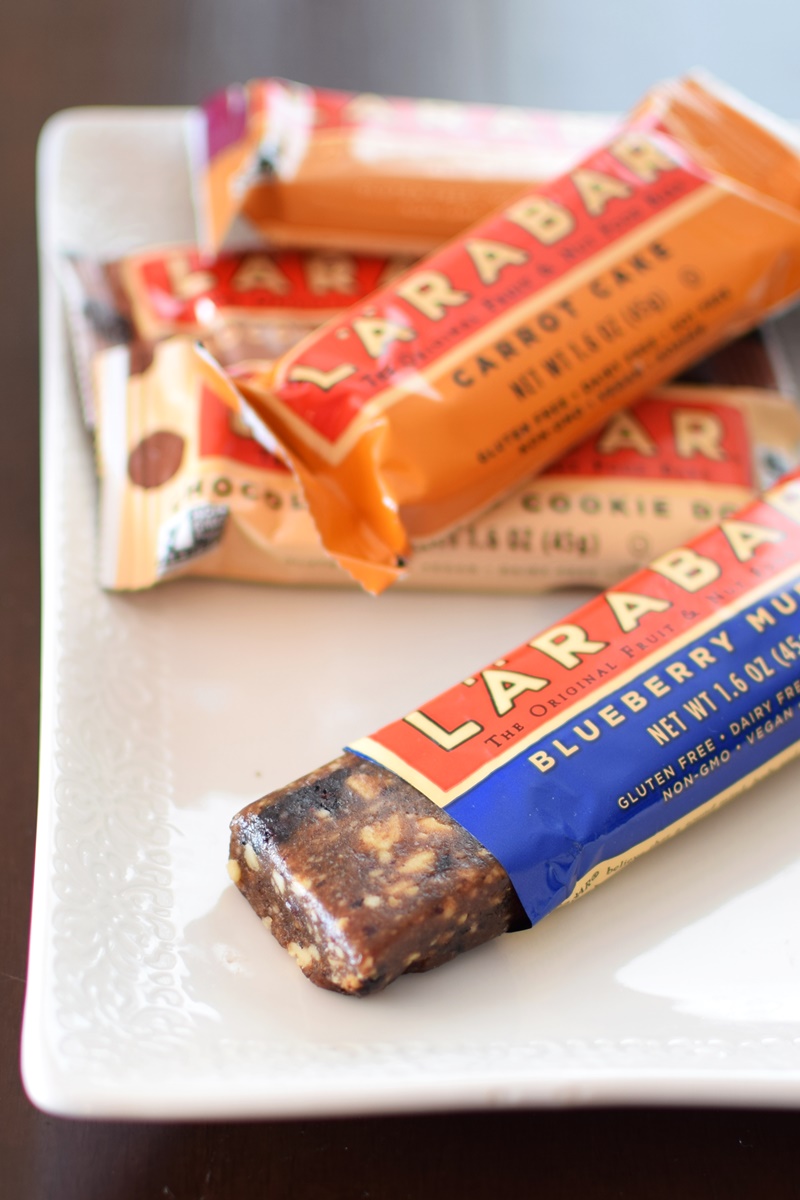 This Larabar is notably sweet with dates and raisins; you can really taste that dried fruit. But the spices are like an afterthought. The ginger heat kicks in later, the cinnamon also emerges late in the game. It’s not a cohesive gingerbread-esque flavor like I was expecting. Perhaps just a little salt would escalate it beyond “just a date bar with nut bits”.

It definitely didn’t taste like a Snickerdoodle cookie, but once I forgot the name and let myself just taste the food, I liked it. This one does have sea salt, so the cinnamon really pops at first bite. There is no missing the spice in this one! That said, dates are the predominant flavor, with the cashews and almonds playing second and third fiddle. The vanilla really adds a nice essence to the overall taste though. Tony guessed it was “cinnamon spice”, and liked it, too.

I detected a faint scent of pumpkin that made this one alluring. The bar was a little drier than the others, but not in an off-putting way. It was just less chewy and less “date-y”. It was nice that while still ever-present, the dates weren’t as prominent. I did note some pleasant spices, but just a pinch of sea salt would really heighten these flavors. There was a pumpkin pie-ish vibe, and it was good, but somehow I feel like dates and pumpkin really aren’t a match made in flavor heaven. The two almost competed and didn’t marry as beautifully as I’d hoped. That said, I think many pumpkin fans would really like this one. Tony immediately guessed this one was “pumpkin”. I just recently learned that he’s really not a pumpkin fan, so this one wasn’t tops on his list. 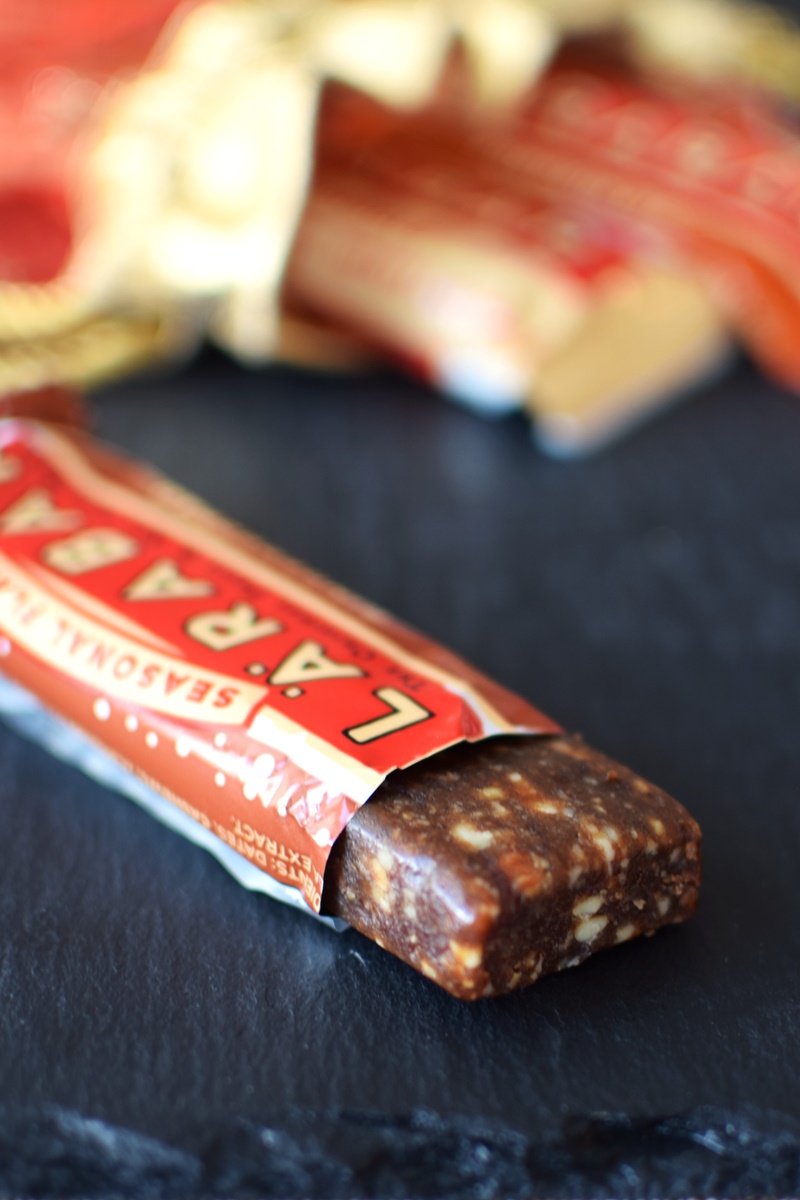 This Larabar is just dates and cashews. It sounds boring, but we both really like this combination. It is nuttier, somewhat creamy, and has a cohesive flavor. But, cookie? This is a date-nut bar through-and-through, so I wouldn’t get your hopes up for dessert.

I quickly learned that this isn’t the flavor I should reach for first thing in the morning. The unsweetened cherries mixed with the dates created a subtle sweet undertone with a slightly shocking tart taste. There were little visible nuts and the occasional small chunk, but the fruit was the overwhelmingly dominant taste. I liked the texture, which was soft and pliable without being overly chewy or adhering to my teeth. No real crunch was to be found, the nuts merely added some interest to the texture. Really, I did like it, and there was a definite cherry pie sort of vibe. However, at 8am the tartness was a bit too much for my sensitive morning palate.

I think the folks at Larabar do “pie” a little better than brownie or cookie. This bar has a pleasant apple pie smell, and even tasted a bit like apple pie filling, if you use your senses a bit. The apples possessed only a natural hint of tartness that was easily combated by their own sweet juices. The texture was less chewy than some of the varieties with a pleasant nuttiness. My friend Liz had the following to say about this flavor:

After just one bite, I was completely sold on this bar – it is PACKED with pieces of almonds and walnuts, has a sweet (but definitely not overly sweet) apple and cinnamon flavor, and has a nice, chewy texture.

Having only tried a pecan pie once in my life, and too many years ago to really remember, I am probably not the best person to reference any similarities between this bar and the real thing. Nonetheless, I must confess that I was slightly under-whelmed by this Larabar. It tasted simply like a handful of dates and nuts, and it was rather off-putting to be chomping on big chunks of almonds rather than pecans. 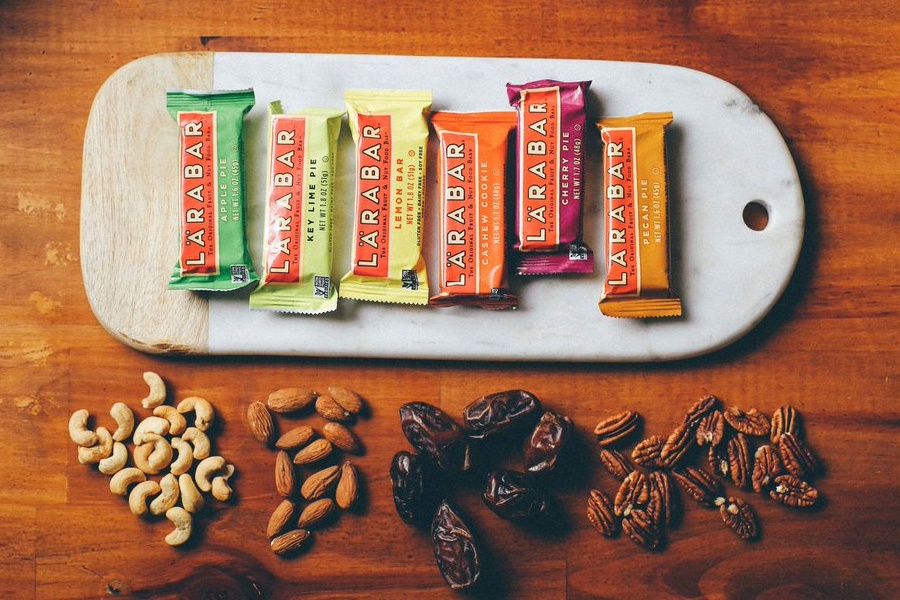 Tony and I both enjoy this flavor, but I’ve been bad at taking notes! So Hannah shared hers with us:

it was just as incredible and nutty as you might hope, yet a bit greasy and crumbly. But all textural failings are swiftly forgotten when that intense, unadulterated peanut flavor spreads itself across your palate. Large pieces of peanuts surface every now and then to contribute a very satisfying crunch. Not to mention, it’s impossibly filling for such a tiny snack. One of the babies can keep you going for hours.

It’s been years since I’ve trialed this flavor (it was a bit too greasy for us), so Hannah offered her feedback for this Larabar flavor, too:

Incredibly rich with coconut flavor, I daresay this bar is the next best thing to eating the fresh fruit itself. Studded with nuts and coconut flakes and yet so soft that it’s almost like eating raw cookie dough, I couldn’t get enough of these. As a fair-weather coconut enthusiast myself, I’m betting that even those wary of this tropical delight will even enjoy these bars.

I haven’t trialed this flavor, but Joanna Miller shared her take with us a few years ago via Sugar Savvy:

The inclusion of almonds, coconut and lime juice along with the cashews give this bar a slight dessert-like quality and extra punch. It really did have a key lime pie hit, and I would gladly eat it for a snack or dessert.

In terms of nutrition, Larabars are free of added sugars (with the exception of the chocolate chip varieties). And they have a “natural” balance of healthy fats, protein and carbohydrates, since they are essentially dates and nuts. Each bar rounds around 200 calories, give or take. 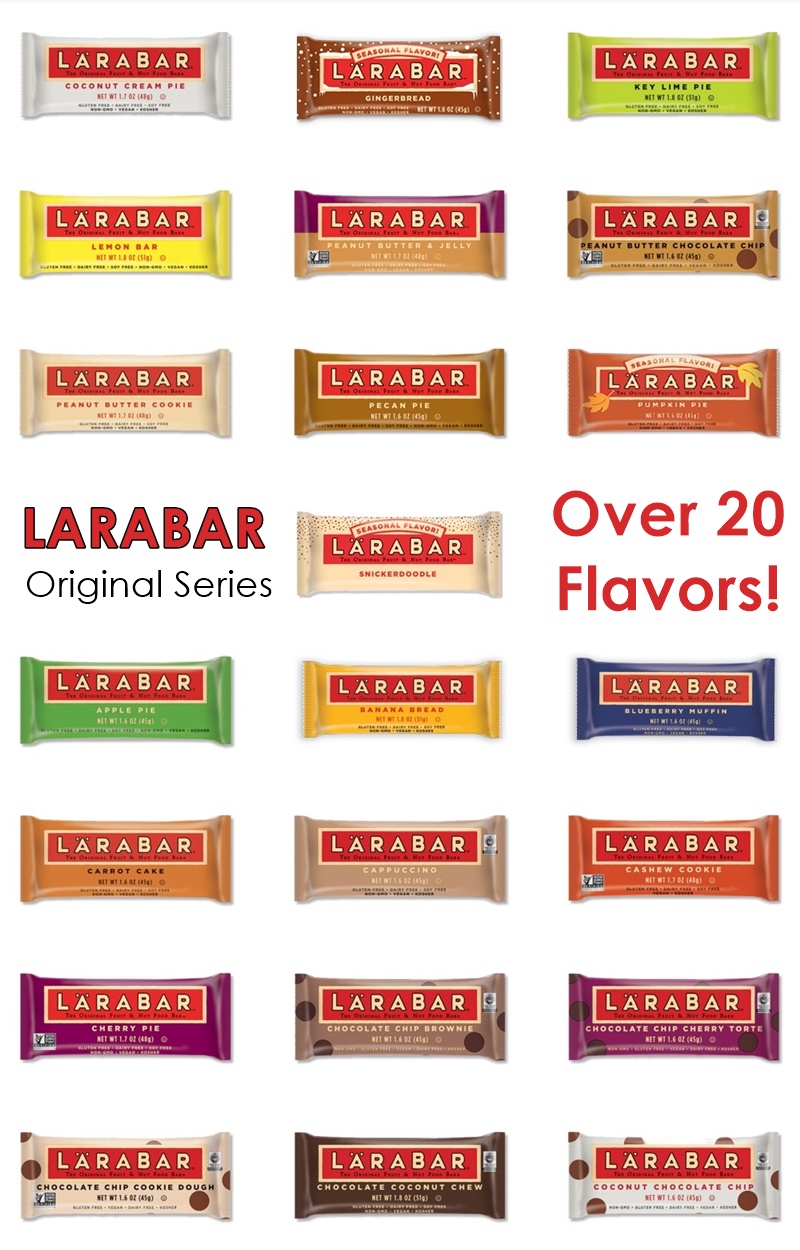 The Facts on Larabar

Dietary Notes: By ingredients, the Original Larabar varieties are dairy-free / non-dairy, egg-free, gluten-free, grain-free, soy-free, vegan / plant-based, and vegetarian. Some varieties are made without peanuts and paleo friendly. Nonetheless, always read the ingredient statement and check with the company on their manufacturing processes for all varieties if potential allergen cross-contamination is an issue for you. Processes and labeling are subject to change at any time for any company / product.

For More Product Information: Visit the Larabar website at larabar.com.

Over 20 flavors to choose from

With over 20 flavors to choose from, there is an option for almost everyone. Admittedly, you must be a fan of dates to appreciate them, as that underlying fruit is impossible to escape, regardless of the variety. We like the soft, chewy, sweetness of these pure date, nut and spice bars, so a selection is always on hand in our home for a quick wholesome snack. I like to buy a variety when on sale, but we’re most in love with the Chocolate Chip Cookie Dough, Blueberry Muffin, and Peanut Butter flavors.