The wholesome whole wheat vibe with nutritious add-ins let me enjoy these as a go-to breakfast on any busy morning. They crisp up nicely and offer delightful texture with a fairly neutral taste. In terms of flavor, they do need "dressing up" with the right toppings - whether it be maple syrup, nut butter, or jam.

On school days, it’s really a marvel that I can manage to wake up, get dressed, pack a lunch, grab a quick bowl of cereal, and run out the door in time to make the train. When I do catch a break later in the day, I find myself eyeing the gorgeous pictures of French toast and pancakes on my favorite vegan blogs. When do these people wake up to make it all? My quick craving fix: Nature’s Path frozen waffles.

This is one of those products that I swore I would never buy. You know, those things you see on the shelf and say “Pfft! I can make that, easy.” And the fact is I could. But only if I stopped sleeping altogether. And while that is a disturbingly tempting proposition (Just think of all the things I would get done!) I think that’s one part of my schedule I would be smart not to alter.

The wheat-based line of Nature’s Path frozen waffles has shrunken over the years (in favor of their expanding gluten-free frozen waffles selection), but they still have a few whole wheat options available …

Glancing over at my neighbor’s plate, I noticed that my waffles looked almost exactly like their Eggo’s as far as size and shape go. My Nature’s Path frozen waffles were, however, darker and speckled with flax seeds, so it wouldn’t have been too hard to tell them apart. The indentations aren’t very deep, but I’m used to our Belgian waffle maker.

Slicing one of my waffles into a manageable forkful, I noted the abundance of flax seeds in each bite. Although they obviously don’t contribute very much to the flavor, I must say I enjoyed the added texture. While the waffles toasted up for a nice crunchy outside, the inside was almost chewy, but in a good way, not in an undercooked and rubbery way.

The taste was a bit reminiscent of whole wheat pasta, hearty, yet fairly neutral. I liked the fact that they were really just basic, plain waffles, and could be accompanied by any sort of topping or side without clashing. I enjoyed them with peanut butter, but you could always go for the more traditional maple syrup, or get a bit adventurous with a vegan version of “chicken” and waffles.

As I opened the package, my senses were greeted with the divine, aromatic scent of maple and cinnamon. Two of my favorite flavors in one waffle, honestly, how bad could it be?

These Nature’s Path frozen waffles had a similar healthy whole wheat vibe, which was starting to grow on me. But unfortunately, I was disappointed to discover that the initial intensity of maple and spice had worn off after cooking, leaving behind a somewhat average-tasting waffle. Not a bad thing, but nothing particularly special either. To get back some of that spice I was longing for, I topped them with pumpkin butter.

Overall, Nature’s Path frozen waffles were basically what I had expected: easy to prepare during an average breakfast time,and relatively tasty. In addition, these waffles are on the healthy side, so I don’t feel at all guilty about eating them for the first meal of the day. Still, I think we could all agree that nothing beats homemade. 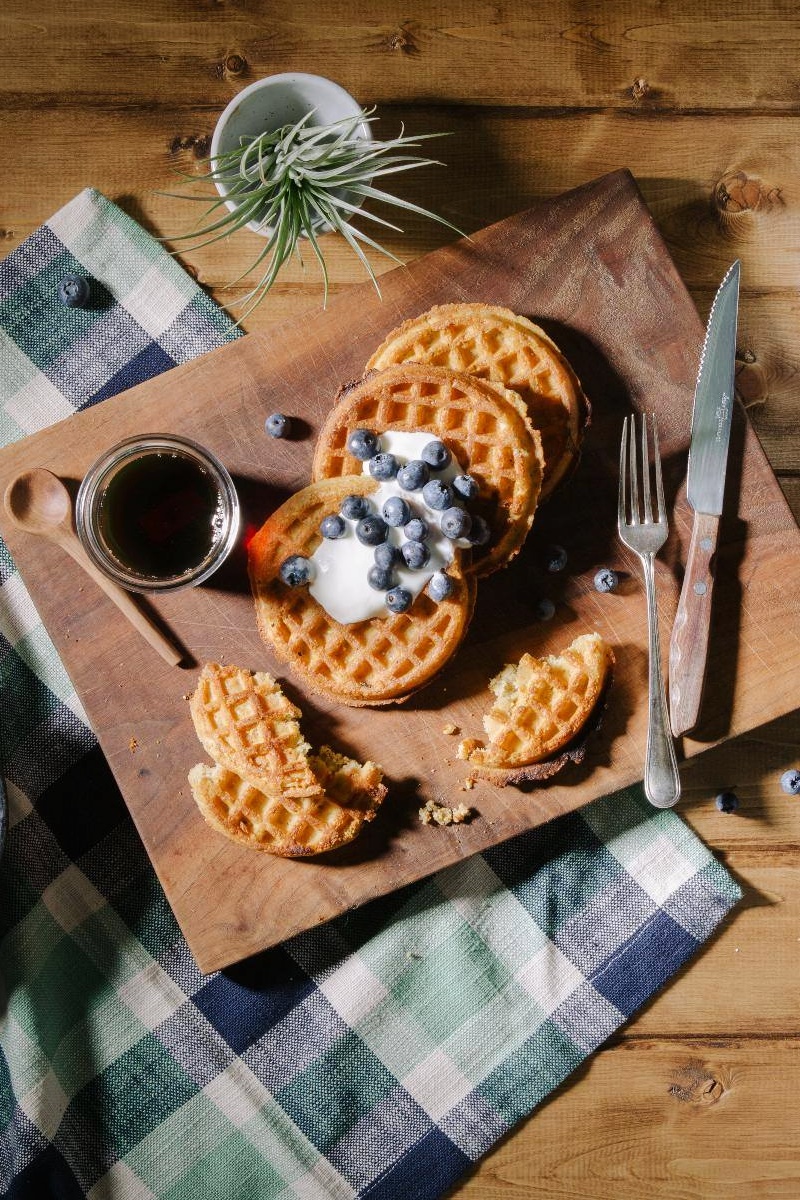 Dietary Notes: By ingredients, Nature’s Path Frozen Waffles are dairy-free / non-dairy, egg-free, nut-free, peanut-free, vegan / plant-based, and vegetarian. Nonetheless, verify on the label and check with the company on their manufacturing processes for all varieties if potential allergen cross-contamination is an issue for you. Processes, ingredients, and labeling are subject to change at any time for any company / product.