Four gorgeously brilliant bottles of ginger spiked sauces arrived at our home as if it were Christmas, well, in the southern hemisphere. We couldn’t wait to get grilling, roasting, and cooking with The Ginger People Dipping and Cooking Sauces!

Yes, barbecue season was quickly approaching, at least in our warm climate, so the marinades were the first two sauces to get my attention. Feeling somewhat neglected, the unopened bottles of Ginger People Dipping & Cooking Sauces finally managed to beckon me back into the kitchen. With summer approaching, this really wasn’t such a bad thing, as these could be served with a plethora of cold entrées and appetizers, beyond their obvious cooking applications. 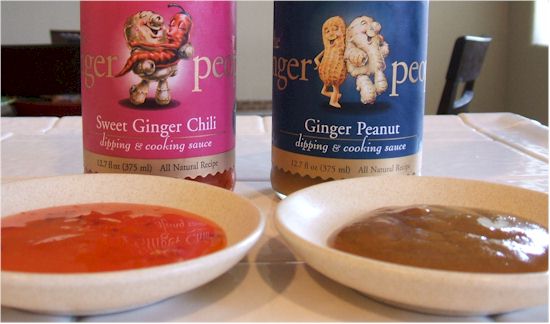 This brilliant orange sauce immediately reminded me of one of our kitchen staples, Thai –style sweet chili sauce.  One look at the ingredients confirmed that the two are remarkably similar, however, the Ginger People boasted two additions, red pepper puree, and of course, ginger.  As a ginger fan myself, I became even more anxious at the sight of not one, but two types of fresh ginger infused into this sauce. Without a moment’s hesitation, I poured some into a dish to trial with a few spring rolls.

Though I wouldn’t have thought it possible, the Ginger People’s version of sweet chili sauce was actually sweeter than the traditional. The intensely spicy and sweet flavors sent our taste buds running in opposite directions, unable to meet in harmony. While the crushed chili does add some excitement that we could tolerate for dipping in small amounts, but the syrupy sweetness was more than our palates could handle. We did like that the pureed red pepper thickened the sauce to a wonderful dipping consistency, but to our disappointment, the bold flavor background muted the ginger, a typically potent rhizome.

Although as a cooking sauce, the Sweet Ginger Chili worked well when customized. Still too sweet on its own, we blended equal parts of the sauce with tamari (soy sauce) for a unique and flavorful teriyaki. 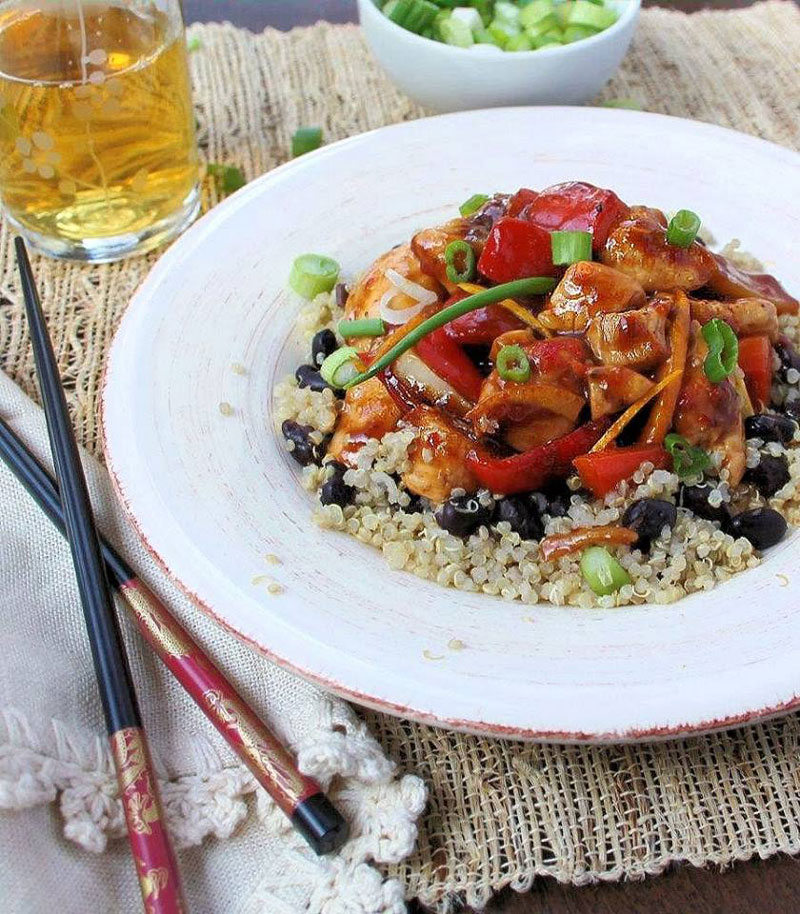 Keep in mind that sugar is used in moderation in our household.  While I do love to bake, we keep very few processed foods on hand, and rarely buy a sweet away from home. Though this product was beyond our sugar threshold, it might be ideal for those who prefer the sweeter side of sauce.

Wow!  Sweet, spicy, bold, rich… this sauce really hits the mark.  Extending well beyond your average peanut sauce, this blend simply tickled every aspect of my taste buds.  With so many potent flavors all wrapped up into one thick sauce, I wasn’t expecting that they would all marry so well.  Yet each took its turn, bowing graciously to the next, without hogging more than its share of the spotlight. All around wow.

In sticking with the label, we did trial the Ginger Peanut variety as a cooking sauce too. Though it did add some pleasant flavor, I really felt that the essence of the sauce was lost. This is a true dipping and pouring sauce in my mind, best enjoyed in its purist form. It is perfect for those light spring rolls wrapped in rice paper, stirred into a cold Asian pasta salad, poured atop a plate of steamed veggies and rice, used as a satay dip, or added to a warm chicken stir-fry once removed from the stove.

In this case, The Ginger People got the sugar load just right.  A slight hint of sweetness kept the savory flavors in check, while enhancing the spicy ginger. As if it couldn’t get any better, a healthy 2 Tablespoons contains just 1g of sugar, .5g of fat, and 20 calories!  I think I am in peanut sauce heaven.  If only I could afford to stock this luxury as a pantry staple.  It may be time to expand my sauce budget!

Thank you Ginger People, this all-natural sauce is definitely a winner!

One look at the ingredients assured me that this product was going to be good.  With a soy sauce base, the toasted sesame oil, chilies, shallots, garlic, and of course, ginger promised a flavorful infusion.

To my dismay, this marinade had a very difficult time coagulating.  A split second after shaking, the potent chili spiked oil floated back to the top. Pouring as quickly as I could after each mixing was really all I could do.  Alas, my first few trials of this product were spicier than I would have liked. But as I made my way to the second-third of the bottle, a more cohesive blend of flavors began to emerge.

As a salad dressing, I really enjoyed the sharp, Asian-inspired tang that shouted vinaigrette! Actual chunks of ginger added intrigue and texture to this otherwise fluid product.  While the entire mix was pulled together by the familiar zest of oil and vinegar, the various bold flavors of sesame, ginger, soy sauce and chili were each identifiable at different times.

Though the Ginger Sesame worked as a marinade, the final cooked meat exuded only the faintest flavor.  Yet, when paired with an extra drizzling atop, … delicious!  It paired wonderfully with grilled chicken breasts (my husband immediately noted the fantastic smell when cooking), and with extra-firm stir-fry tofu.

Overall, this was a very tasty sauce, though it did seem to suffer from an identity crisis.

My pre-notions were disproved when I tasted the Ginger Lime marinade.  Rather than refreshing, it retained a deep flavor that also struck me as Asian-inspired. It was thicker than the Ginger Sesame, and very consistent, much like a natural barbecue sauce. Not surprisingly, soy sauce was once again displayed prominently on the ingredient statement.

The bolder taste made for a slightly improved marinade infusion. Yet, after a few hours of soaking, our chicken retained just a few deep notes. As a marinade, it still didn’t penetrate to the level I had hoped.

However, described also as a cooking sauce, I still held out hope for my flavor injected cravings.  The next time around, we used the leftover marinade as a simmer sauce, and prepared the chicken stove-top style. A thin layer of caramelized coating enrobed each breast for a tasty dose of deep flavor. While the soy sauce truly carried the flavor, the influence of both lime and ginger could be identified.  The lime acted as an enhancement with only a gentle presence, and no blatant citrus notes. The ginger served as a foundation, the rock that lent itself to the bold and controlled the blend from being too teriyaki. My husband, who claims to not like ginger in any form, scarfed his serving down and went back for seconds.

Where to Purchase:  All of The Ginger People’s products are available to purchase in stores or direct online for U.S. customers.  Alas, they are not available internationally (via the web) as of yet, but hopefully in the future.  Outside of the U.S. they can be found in select natural food stores in Canada, the UK, and Japan.  Several Ginger People products can also be ordered via Amazon.

The Facts on Ginger People

Dietary Notes: By ingredients,Ginger People Dips + Sauces are dairy-free / non-dairy, egg-free, vegetarian. Some varieties are nut-free, peanut-free, vegan/plant-based, and gluten-free. Nonetheless, always read the ingredient statement and check with the company on their manufacturing processes for all varieties if potential allergen cross-contamination is an issue for you. Processes and labeling are subject to change at any time for any company / product.