Who would have ever guessed ginger could have so many personalities?  This schizophrenic little rhizome takes on an array of different images thanks to The Ginger People.  I had already fallen in love with their assortment of ginger candies and chews, but I was looking forward to a taste from the savory side. 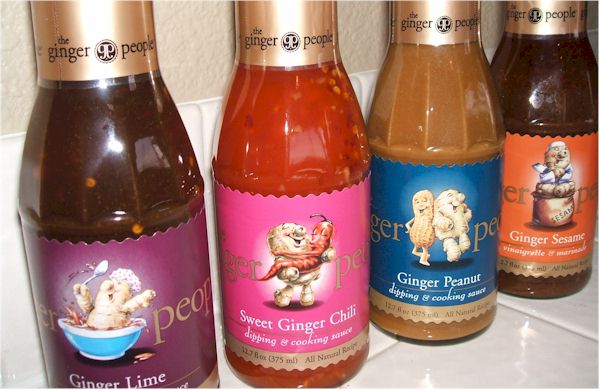 Adorned with a meditating ginger chef wielding a cleaver and a slightly psychotic smirk, this very attractive (gift-worthy really) bottle of marinade wasn’t shy about its fun side.  One look at the ingredients assured me that this product was going to be good.  With a soy sauce base, the toasted sesame oil, chilies, shallots, garlic, and of course, ginger promised a flavorful infusion.

To my dismay, this marinade had a very difficult time coagulating.  A split second after shaking, the potent chili spiked oil floated back to the top.  Pouring as quickly as I could after each mixing was really all I could do.  Alas, my first few trials of this product were spicier than I would have liked.  But as I made my way to the second-third of the bottle, a more cohesive blend of flavors began to emerge.

As a salad dressing, I really enjoyed the sharp, Asian-inspired tang that shouted vinaigrette!  Actual chunks of ginger added intrigue and texture to this otherwise fluid product.  While the entire mix was pulled together by the familiar zest of oil and vinegar, the various bold flavors of sesame, ginger, soy sauce and chili were each identifiable at different times.

Though the Ginger Sesame worked as a marinade, the final cooked meat exuded only the faintest flavor.  Yet, when paired with an extra drizzling atop, … delicious!  We trialed it as both a meat and vegan marinade.  It paired wonderfully with grilled chicken breasts (my husband immediately noted the fantastic smell when cooking), and with extra-firm stir-fry tofu.  Of course, the tofu did absorb much more of the flavor. 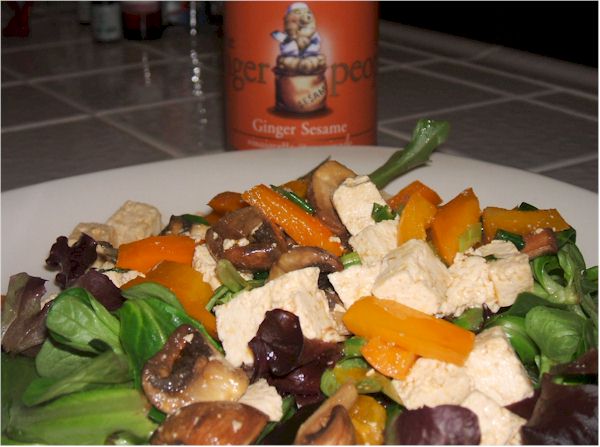 Since it is a touch spicy, I didn’t find this vinaigrette well suited to a pasta salad.  However, it was perfect when mixed into the more absorptive grain, rice.

Overall, this was a very tasty sauce, though it did seem to suffer from an identity crisis.  The separation anxieties caused each flavor to stand out at different times, coming together in unison for only occasional bites.  Perhaps some mild coagulation therapy will perfect this already delicious blend.

This time the crazy ginger chef seems to be basting in his own soup!  Since I tend to associate lime with Spanish and Mexican cuisine, his soup splashing left me a bit puzzled.  Nonetheless, this marinade and cooking sauce deserved a fair trial.

Though I am still not certain what that ginger chef is up to, my pre-notions were disproved when I tasted the Ginger Lime marinade.  Rather than refreshing, it retained a deep flavor that also struck me as Asian-inspired.  It was thicker than the Ginger Sesame, and very consistent, much like a natural barbecue sauce.  Not surprisingly, soy sauce was once again displayed prominently on the ingredient statement.

The bolder taste made for a slightly improved marinade infusion.   Yet, after a few hours of soaking, our chicken retained just a few deep notes.  As a marinade, it still didn’t penetrate to the level I had hoped.

However, described also as a cooking sauce, I still held out hope for my flavor injected cravings.  The next time around, we used the leftover marinade as a simmer sauce, and prepared the chicken stove-top style.  A thin layer of caramelized coating enrobed each breast for a tasty dose of deep flavor.  While the soy sauce truly carried the flavor, the influence of both lime and ginger could be identified.  The lime acted as an enhancement with only a gentle presence, and no blatant citrus notes. The ginger served as a foundation, the rock that lent itself to the bold and controlled the blend from being too teriyaki.  My husband, who claims to not like ginger in any form, scarfed his serving down and went back for seconds.

Where to Purchase:  All of The Ginger People’s products are available to purchase in stores or direct online for U.S. customers.  Alas, they are not available internationally (via the web) as of yet, but hopefully in the future.  Outside of the U.S. they can be found in select natural food stores in Canada, the UK, and Japan.  Several Ginger People products can also be ordered via Amazon.