“Doctor Kracker Snacker Krackers,” just try and say that one five times fast.  Unlike the name, these wholesome snacks are actually quite simplistic. 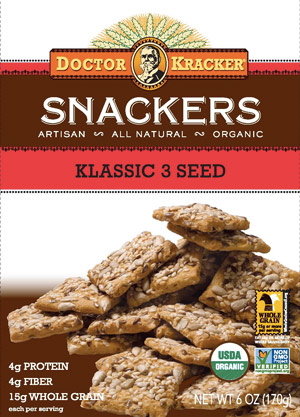 Made with little more than a hearty blend of seeds, whole grains and flours it would be difficult to pass these off as your typical unhealthy cracker.  The good Doc reveals his obsessively organic side, allowing just sea salt and yeast to slip through the non-organic cracks.  If sea salt and yeast were actually available in organic versions, I am sure Doctor Kracker would send out a purchase order immediately.

Ready to take a peak at my first nutritious cracker, I opened an enormous box filled with generously packed tub-style containers of Snacker Krackers, in three different varieties.  I was immediately taken back by the obvious thickness of these morsels.  They were double the height of your average cracker, yet obviously denser than a basic crispbread.  It looked like a very unique product altogether.

Beyond the different colored labels, each variety appeared quite similar at first glance.  However, as I looked closer I noted that each was colored a slightly different shade of grain and sported its own special seedy topping.

Seeded Spelt (no longer offered as snackers, only flatbread)

With an “Eeny, Meeny, Miny, Mo” I opened the Seeded Spelt Krackers first.  The tops were dotted with sesame and sunflower seeds, while flaxseeds appeared embedded within.  With my first bite I received all that I expected and more.  Thick, dense, and now I must add insanely crunchy to the descriptive line up.  These crackers take crispy to a whole new level, making that audible “crunch” with every tasty bite. 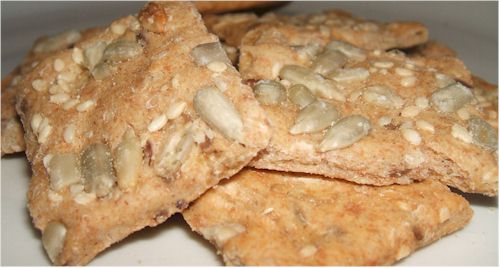 The spelt lent a difficult to describe flavor that is just slightly soured from the sweetness of wheat.  Any spelt connoisseur will likely have many better adjectives to describe the flavor, but you will just have to trust me that it tasted good.  Those who are used to trans fat loaded crackers made with all-purpose flour and sugar may find these crackers a bit heavy.  I am a lover of all things grainy and full of natural flavors, so these were excellent in my book.

The sunflower and sesame seeds added to the ‘stand-alone’ power of this cracker.  However, I confess that I did enjoy it topped with Sheese (both creamy and hard “cheeses”), and I believe this cracker could even handle a sweeter dip very nicely.

For a flour comparison, I went for the wheat-based selection next.  Like the Seeded Spelt, the Klassic 3 Seed was dotted with sunflower and sesame seeds.  Though it also had several bonus flaxseeds that graced the tops. 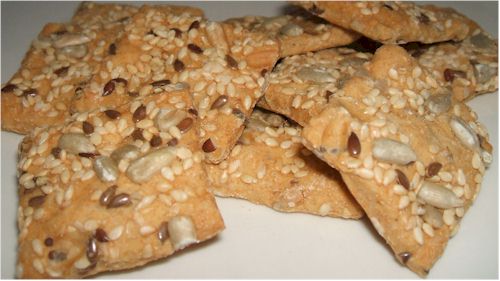 Once again, the crunch was exciting and undeniable.  The milder taste of whole wheat and oats was a slight contrast to the more sharply flavored spelt crackers.  Consequently, this was the most versatile of the three Kracker varieties. However, they were just neutral enough to suit virtually any dip or topping.  If I were expecting guests who had a penchant for healthy food, and no dentures, these would surely be on the table. 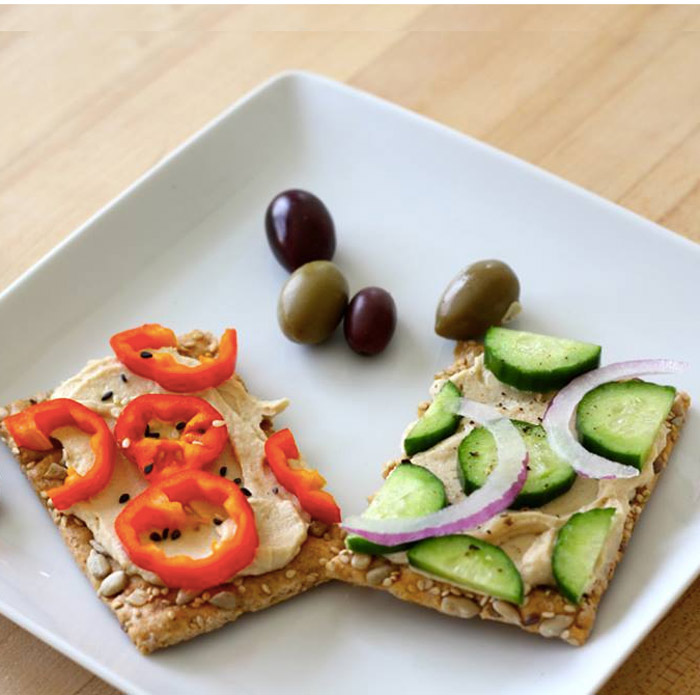 Though the Klassic 3 Seed lacked zest to be a ‘stand alone’ cracker, I found myself subconsciously munching one after the other.  Perhaps the very neutrality that tasted good, but didn’t wow me, was in fact addictive!

Hannah found that these were very similar to the Seedlander, but unlike the Seedlander all of the flavors were able to shine as the flax isn’t as overpowering as the poppyseeds.

This variety was obviously a bit unique from the others.  While the Klassic 3 Seed and the Seeded Spelt maintained a nice tan, the Seedlander Krackers are deepened with an added dose of whole grain spelt flour.  They also have their own special topping.  Each cracker is freckled with a generous dose of poppy seeds, sesame seeds, and the occasional pumpkin seed. 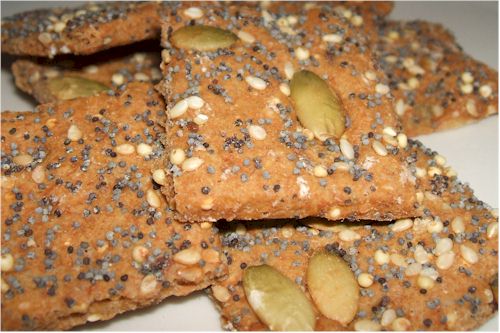 For myself, these were the hands down winner. Beyond hearty, they were relatively neutral, no overly bitter or sharp notes.  Ah yes … they are a bit sweeter!  It figures doesn’t it?  The one with that added bit of sugar always wins. Luckily, they use organic agave syrup, and with a light hand. Each serving contains just 2g of sugar, compared to the honorable 0g per serving in the other two flavors.

The poppy and sesame seeds supported the blend nicely, though from a flavor perspective, the pumpkin seeds seemed a bit unnecessary. 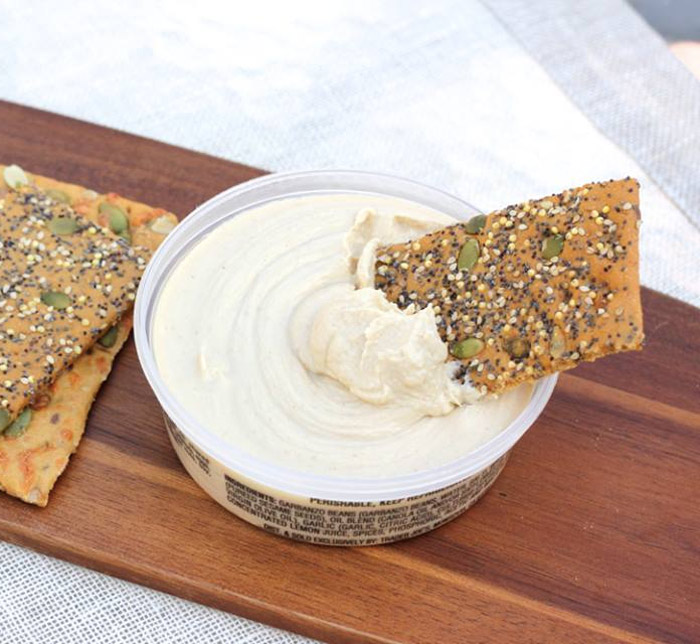 Hannah also gave these a try:

This variety possesses a hearty taste similar to rye bread, but coupled with all of the toppings, they are elevated to a whole new level. The poppy seeds seemed to dominate the flavor profile, but each individual element was far from forgotten. Even those that didn’t share the spotlight contributed amazing texture, bringing added dimension to each bite. All of these hearty subjects did amount to a serious test of my teeth and jaws at times though. These crackers were so solid that I might not recommend them for the weak of dentistry. 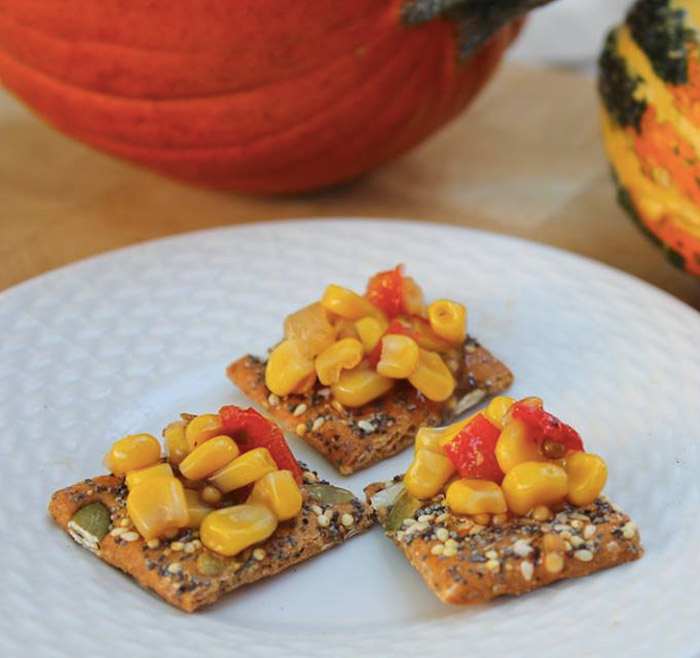 Where to Purchase: Doctor Kracker Snacker Krackers are available in stores throughout the U.S. and Canada. Visit the Dr. Kracker website for a U.S. store locator.  They are also available online, via Amazon.

The Facts on Doctor Kracker Snackers

Dietary Notes: By ingredients, Doctor Kracker Snackers are dairy-free / non-dairy, egg-free, nut-free, peanut-free, soy-free, vegan / plant-based, vegetarian. Nonetheless, always read the ingredient statement and check with the company on their manufacturing processes for all varieties if potential allergen cross-contamination is an issue for you. Processes and labeling are subject to change at any time for any company / product.