So after making the meatless meat plunge into the soy-based Primal Strips, I decided to tackle the seitan-style flavors.  Those Primal Spirit people seem to be winning me over.  Though I have always snubbed my nose at meat imitations, the soy ones had truly impressed me. 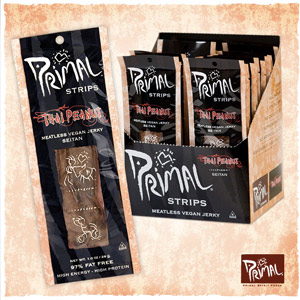 The seitan-style strips are wheat gluten based.  They aren’t completely soy-free due to the addition of soy sauce, but definitely soy-low.  Before opening the packages, I noticed that the strips appeared similar to the soy-based ones, but were much lighter in color.  I was very surprised to see that these still packed a good dose of protein (10-11g per serving) with a very low calorie profile (74-99).  The calories were particularly surprising as this was a snack that really did seem to satiate.

To address the similarities, the texture was remarkably similar to the soy-based strips.  They were still quite “meaty”, chewy, and tore apart with a shredding ease.  I think the seitan may have been a bit less chewy once I got into them, but really it was hard to tell.  As for differences, it seemed more about the flavors.

Since I had never come across a Thai peanut flavored jerky, meat or meatless, my curiosity selected this flavor first.  I wasn’t disappointed.  The peanut flavor was mild, yet delicious and inviting.  A warm heat emerged as an aftertaste.  It was spicy, but less spicy than I had anticipated, which was nice.  This is easily my favorite flavor.  My addictions usually arise from a combination of good taste, texture, and uniqueness.  The Thai Peanut certainly possessed all three.

Having no idea what “mesquite” tastes like, I took a chance and selected this flavor next.  I can only assume that the flavor was true to taste, based on the other Primal Strip flavors.  Unfortunately, as it turns out, I am not a big fan of mesquite, at least not in combination with lime.  The sweet and sour mix with the lime really didn’t appeal to my taste buds.

I was surprised to find that the Teriyaki strips had a good dose of spice.  They weren’t too sweet, as some teriyaki flavored items can be, yet it was a very nice sweet and spicy blend.  I like that the Primal Strips are quite flavorful, yet not overloaded with artificial flavor to try to mask the non-meat backdrop.  The Teriyaki was an excellent example of how they work with the seitan rather than trying to hide it.

Though I was a huge skeptic, this Primal Spirit company has really created not only a “meaty” vegan product, but also a tasty one!  Onto the final version, shiitake mushroom…

Where to Purchase: Primal Strips are sold in stores throughout the U.S. and Canada.  If you search the web, it also seems to be available from a few vegan online vendors

The Facts on Seitan Primal Strips

Dietary Notes: By ingredients, these Primal Strips dairy-free / non-dairy, egg-free, nut-free, peanut-free, vegan / plant-based, vegetarian. Nonetheless, always read the ingredient statement and check with the company on their manufacturing processes for all varieties if potential allergen cross-contamination is an issue for you. Processes and labeling are subject to change at any time for any company / product.