After trialing both of the soy-based Primal Strip flavors, and the three seitan-based flavors, I was finally prepared to give this veggie based jerky a whirl. 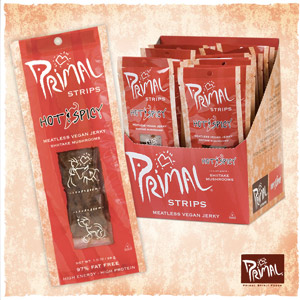 Oddly enough, the shiitake mushroom based Primal Strips sounded the most exciting, yet I uncharacteristically saved them for last.

The Shiitake Mushroom only comes in one flavor at present, Hot & Spicy.  Before opening the package, I noticed that this jerky snack was a bit different from the others.  It was less “free-form,” as it seemed to have been shaped into an almost perfect rectangle.  Also, it was a very deep, coffee-like brown.

Upon opening, I noticed that it also had a different texture.  The shiitake mushroom was thicker than the others (or than your average jerky for that matter) and seemed to pull apart more like a fruit bar, yet with some meat-like shreds evident.  As I bit in, it did have a more “meaty” taste than I expected.  I liked the flavor as I began to chew, slightly sweet with a touch of spice.  However, that “touch of spice” quickly magnified into the Hot & Spicy I was a bit fearful of.  It wasn’t run and grab water hot, but quite spicy nonetheless.  Since I prefer mild spice, this isn’t the first flavor I would grab.  I did like the shiitake mushroom base though, and hope to see more flavors out in this version

Where to Purchase: Primal Strips are sold in stores throughout the U.S. and Canada. If you search the web, it also seems to be available from a few vegan online vendors

The Facts on Seitan Primal Strips

Dietary Notes: By ingredients, these Primal Strips dairy-free / non-dairy, egg-free, nut-free, peanut-free, vegan / plant-based, vegetarian. Nonetheless, always read the ingredient statement and check with the company on their manufacturing processes for all varieties if potential allergen cross-contamination is an issue for you. Processes and labeling are subject to change at any time for any company / product.