Hannah of the Bittersweet Blog shared her review of the Soy Dream Frozen Dessert with us.

It all began innocently enough – The simple quest to sample various vegan ice creams, not necessarily to compare to the “real thing,” but to see how they stacked up as an enjoyable dessert by themselves. How far wrong my search inadvertently veered, into that dark, unfriendly realm of vegan foods that make omnivores shudder and exclaim, “Ugh! With ’substitutes’ like that, why would anyone ever go vegan?!” and further weakens my usually unfaltering belief that soybeans can be a reasonable substitute for just about anything that would usually be an animal or animal product. 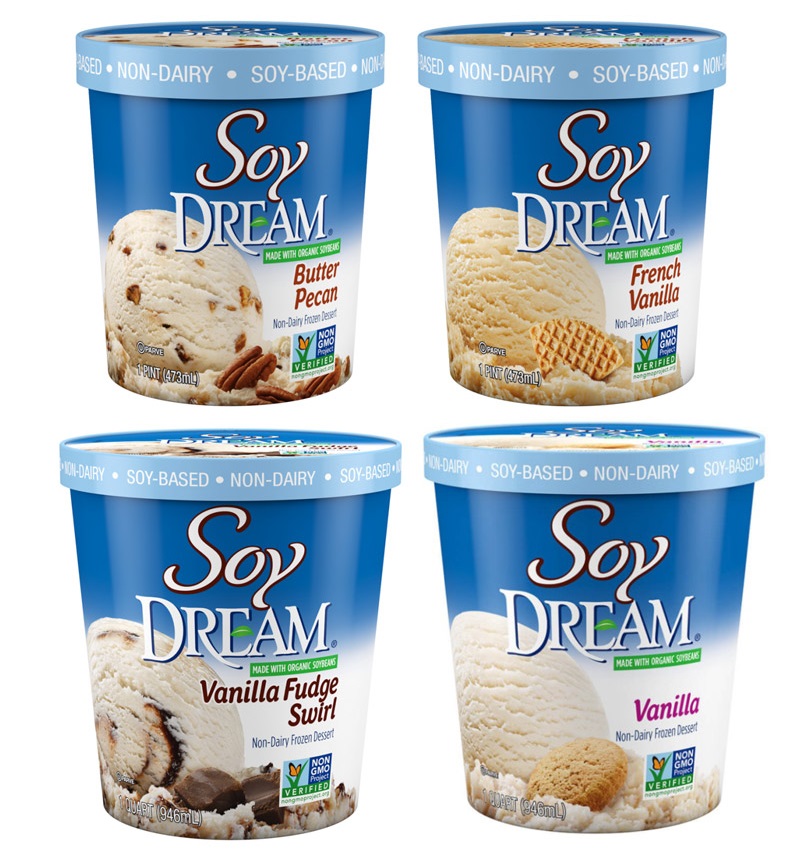 I had previously bought the travel-sized boxes of of soymilk also offered by Soy Dream, which I found to be perfectly decent. So I was sadly surprised that the quality and taste of their “ice cream” left much to be desired.

At first glance as I opened the lid, I thought that perhaps something went wrong when coloring was added. Or maybe it had gone bad some how? Staring me in the face was this creamy, yellow soy-based ice cream. Not like taxi cab yellow, but much more pronounced than I would expect for something labeled as “French Vanilla.”

Digging in nonetheless, I found that the ice cream was at first touted a very bright vanilla taste. As I continued to stuff my face, it soon became sickeningly sweet. Maybe this was due to the fact that one of the first ingredients was high-fructose corn syrup, followed by oil, and then more sugar. As much as I wanted to enjoy this, I really couldn’t stomach much more than ½ cup at a time. Lifting the lid, I had to double check the label to make sure I hadn’t grabbed the vanilla again. The contents of the container were so pale – no strawberries to be seen! At least it looked a little more natural. I hoped for the best as I spooned out a bowlful.

At first bite, I was taken aback by the intense flavor. Not at all what I had thought based on its appearance. Unfortunately, it tasted extremely artificial. Nothing like strawberries found in nature, and more like those chemically enhanced children’s fruit snacks, only frozen. The darker spots even tasted sour, not at all pleasant, really. As disappointed as I was with the vanilla, the strawberry was downright repulsive. My greatest regret is having the remainder of the pint to go through.

Admittedly, theses are only two of the ten different flavors that are offered by Soy Dream (now they only have four!), and in fact, I even have another one (Chocolate) sitting in my freezer, purchased by my mom. She reports that it’s actually very enjoyable, quite contrary to my reactions towards the contents of the other cartons I explored. Comparing it to something akin to a chocolate sorbet, she went further to say that it feels almost light and airy, as opposed to the standard density of cow’s milk ice cream.

The Facts on Soy Dream:

Dietary Notes: By ingredients, Soy Dream Ice Cream is dairy-free / non-dairy, egg-free, gluten-free, peanut-free, vegan / plant-based, vegetarian. Most varieties are nut-free. Nonetheless, always read the ingredient statement and check with the company on their manufacturing processes for all varieties if potential allergen cross-contamination is an issue for you. Processes and labeling are subject to change at any time for any company / product.

Best on the market!

I’m sad it’s been discontinued! It’s the closest nondairy dessert to ice cream, I’ve ever had, including almond & coconut!

Best Ice cream I’ve ever had

When I was younger I wasn’t able to have anything dairy because I had very bad asthma so I drank soy dream milk and only had candy with no dairy I would only eat Icys because there weren’t a lot of non dairy ice cream options The I discovered soy dream had a couple ice creams. I loved the vanilla one. as I grew older I was slowly able to have dairy but every one and then I will go back to drinking soy dream milk and I’ve since looked for the ice cream only to guess that it was discontinued after not being able to find it anywhere it is a shame they discontinued it I really loved it