This black chai masala tea recipe is from the January issue of the free e-magazine, The Vegan Culinary Experience.  In this recipe, Chef Jason Wyrick uses the whole spices … fennel seed, ginger root, cinnamon sticks, cloves, and cardamom pods … to offer the purest of flavors.

Like many Indian foods, this one is full of small amounts of lots of spices.  This combination creates a very complex tea, but because small amounts of everything are used, no one spice is stands out over the others.  The pepper and the ginger are what create the spiciness in the chai while the cloves, fennel, and cardamom give it its strong aromatic quality.  Oddly enough, because the spices in this tea are so strong, the cinnamon serves to mellow it out!  Note that the spices are boiled first to infuse the tea with their intense flavor and to keep infusing it as the tea steeps.  The black tea is added at the end because if it cooks too long, it gets bitter. 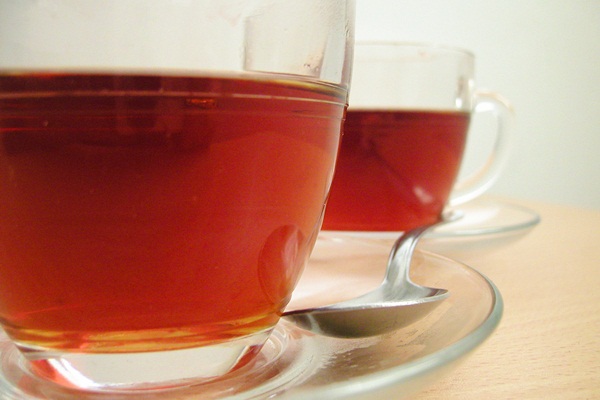 Indian food, of course!  A good suggestion is to serve this with a mild korma or with veggies (eggplant is a good choice) in a rich tomato sauce.  Avoid spicy foods with this if you don’t like a lot of heat as the chai tea is spicy and will thus make spicy foods even spicier!

The longer the spices brew, the better, so if you have time, allow the spices to sit for an hour or two before adding in the black tea.  The black tea is the ingredient in this drink that shouldn’t be brewed any longer than for what the recipes calls.