This onion focaccia recipe and post come from Brilynn Ferguson of Just Baking and Jumbo Empanadas.

Focaccia is kind of like pizza’s puffier, less dressed cousin.  However, this is one of those rare occasions where nakedness conveys class instead of trash.  Instead of being slandered in the food tabloids for coming out of the oven wearing little more than some onions and herbs, focaccia is held in high esteem, like a James Beard award winner.  Maybe it’s the fancy name, maybe it’s the lack of messy red sauce, but it’s fully acceptable to serve focaccia as an appetizer at an adults only dinner party.  What’s more, it will even garner oohs and ahhs and requests for the recipe.  Pizza can only dream of being accepted at that same party, it just wouldn’t happen.  More importantly though, focaccia is easy to make.  Try classing up your next dinner party with this minimal effort finger food.  Feel free to play around with the toppings, but remember not to overdo it, save the excess for sports, pizza and beer nights. 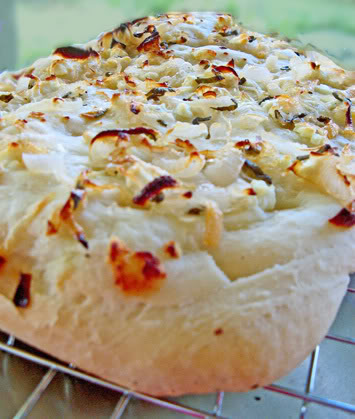