This is one of those recipes that any old-fashioned, self-respecting small town church cookbook would not be without! I discovered the dish on a recent trip to visit my family in Mississippi following my mother’s serious surgery and long hospital stay. Their refrigerator was stuffed full of soups and casseroles from friends and neighbors, prepared with love and delivered with best wishes for a speedy recovery.

One of those casseroles, Poppy Seed Chicken, smelled delicious, though it wasn’t vegan, so I couldn’t partake. But, once home, I set about to recreate it. If you aren’t terribly interested in how I went about the task of devising this vegan casserole, just skip to the recipe. But if you are, keep reading! 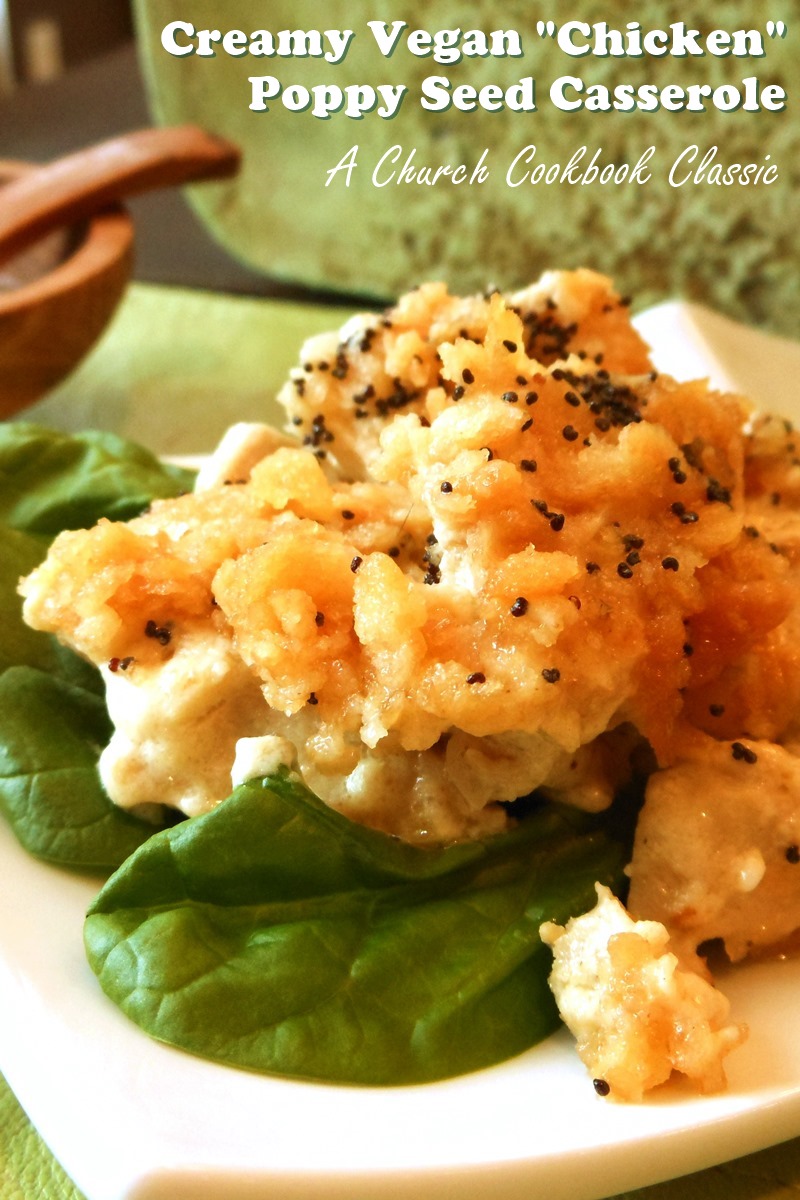 First, I found a PDF of a church cookbook online and printed the recipe. The sour cream was no problem for making this vegan casserole, as prepared vegan substitutes are tasty and widely available.

The three (!) cans of Condensed Cream of Chicken Soup were another matter. However, again online, I found a recipe for a homemade substitute. It called for 3 tablespoons of butter (good grief!), 1 tablespoon of flour, 1/2 cup milk and 1/2 cup chicken broth. Basically, it resulted in a kind of very rich béchamel sauce, easily veganized with dairy-free margarine, unsweetened soymilk, and “no-chicken” broth. For my test, I prepared it as directed with my substitutions, but felt it would be too thin with the broth added, so I used only soymilk combined with “no-chicken” bouillon cubes. That worked great and I had plenty of sauce—about 1-1/2 cups—even without the additional 1-1/2 cups of liquid, but it was way too rich for a the vegan casserole that I had in mind.

So, for my second and final test, I used only 1 tablespoon of butter, upped the flour to 2 tablespoons, and upped the soymilk to 3/4 cup, along with the “no-chicken” bouillon cube. Perfect! Because I increased the soymilk to 3/4 cup, I only needed to double, instead of triple, this formula to have the 1-1/2 cups of sauce that I had determined was just right for this vegan cassereole.

For the 4 cups of chicken, I substituted 2 packages of Morningstar Farms Meal Starters Chik’n Strips, cut into bite-size pieces, though you could certainly substitute prepared or homemade seitan. Other than that, I decreased the 1/2 cup melted butter called for by half to moisten the Ritz Cracker crumbs. And I combined those two ingredients rather than drizzling the butter over the top, as I wanted to insure that this vegan casserole had an even coating of the crumbs.

My version of this classic is absolutely addicting and plenty rich! It is the ideal comfort food. But, let’s face it: there is not a lot that makes it healthful. The fix proved to be quick and simple: I merely served a scoop of the hot vegan casserole over a bed of fresh, raw baby spinach. The chewy bright green spinach set off the creamy white and gold casserole to perfection. In fact, the contrast actually made the casserole even more appealing than when eaten by itself. So dig in! 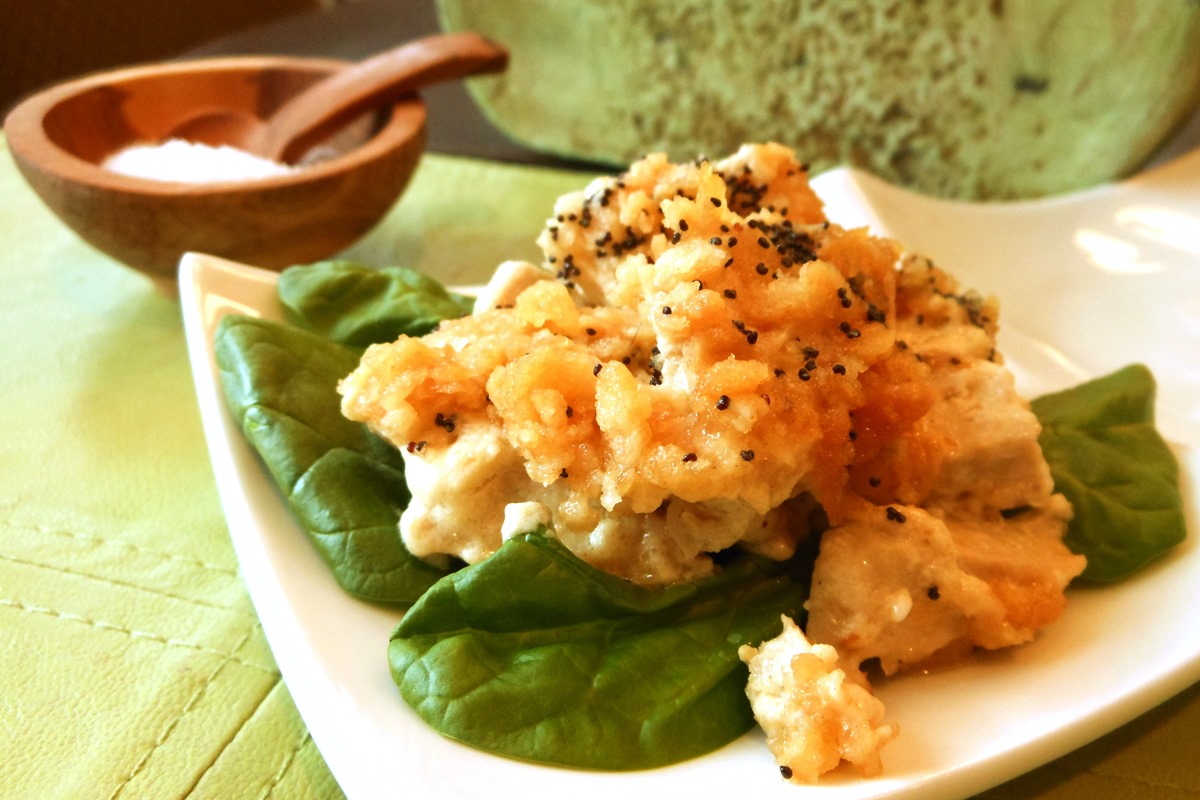 By ingredients, this recipe is dairy-free / non-dairy, egg-free, vegan, and vegetarian. For other special diet needs, choose your “chick’n” wisely. 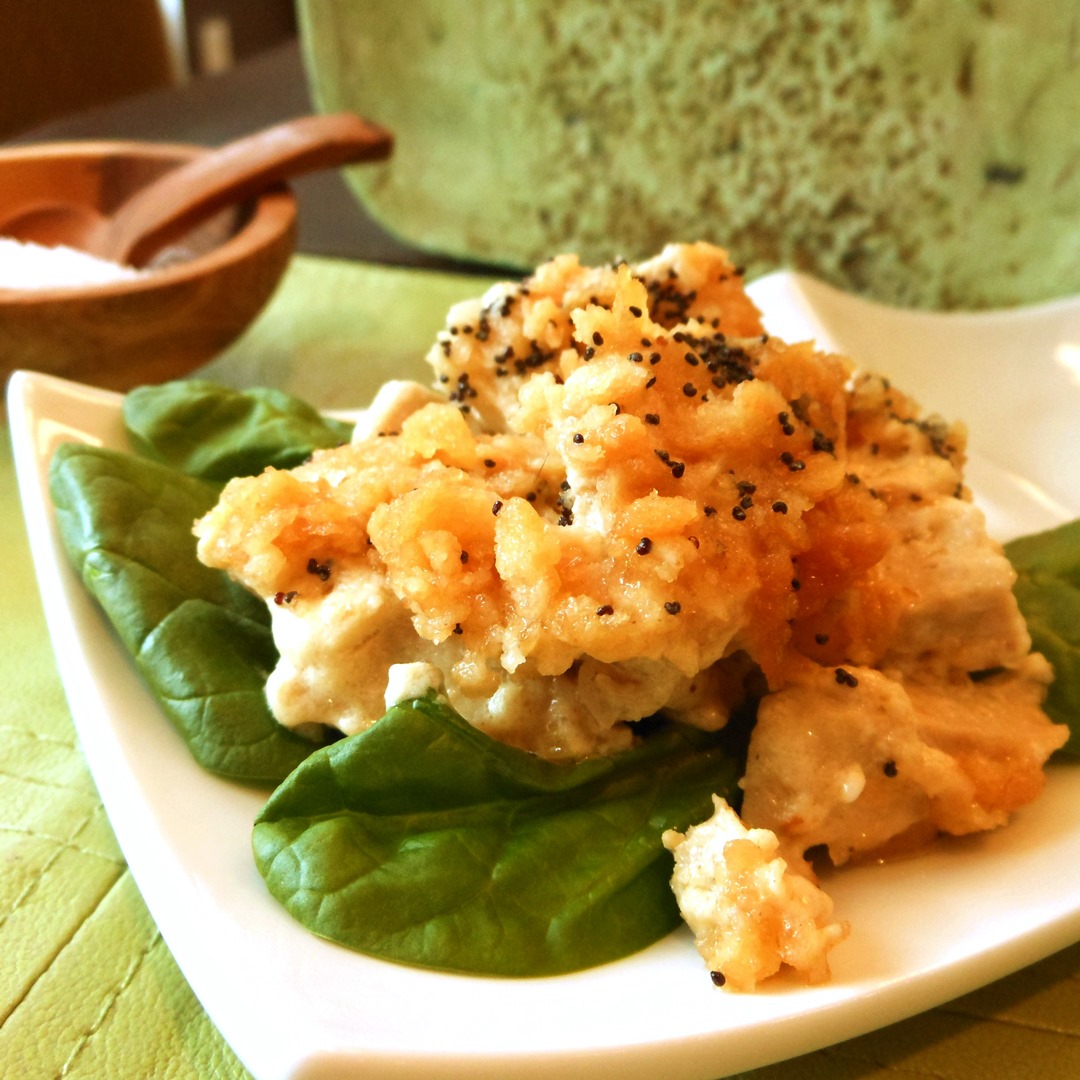 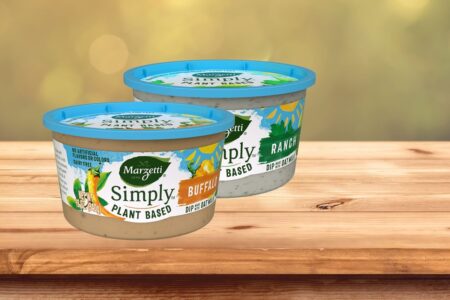 Marzetti Simply Plant Based Dips arrive in Ranch and Buffalo 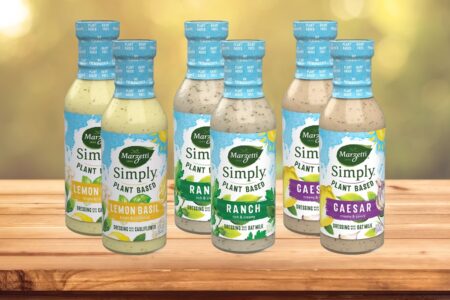 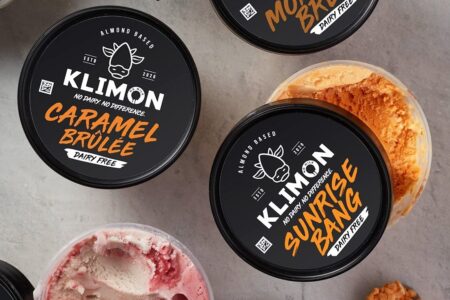