This soy whipped cream recipe is quite the magic trick! It takes two simple ingredients and turns them into a glorious whip. We first posted this recipe over fifteen years ago, when it was shared by a reader. Those who follow the recipe love it, but those who tinker can get frustrated. So I’ve tested several variations myself, and am posting tips, options, and photos to help with your own success! 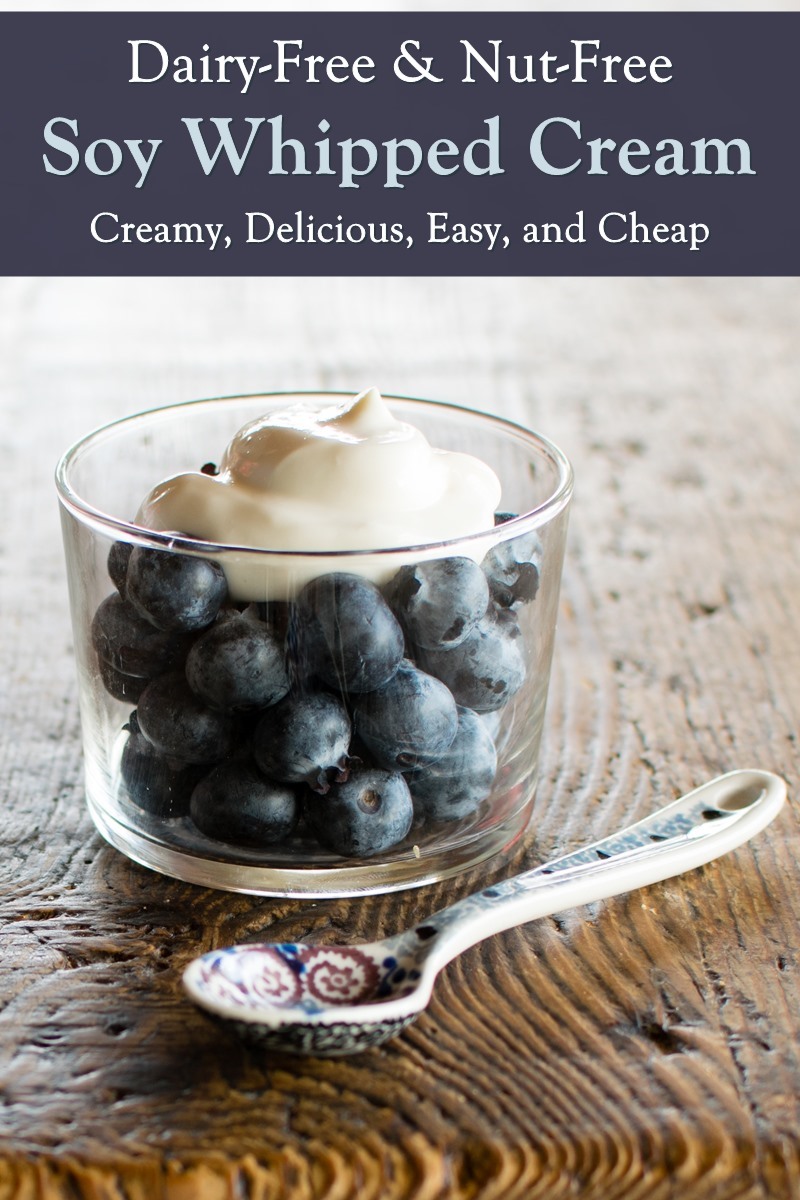 Soy Whipped Cream per the full recipe, after sitting out for 20 minutes, still stable.

This recipe turns into a thick cream right before your eyes. But you do need to follow the recipe for the best soy whipped cream results. Here are some answers to common questions about this recipe, including  options and alternatives that will work.

Can I Substitute another Dairy-Free Milk Beverage? This recipe works very well with plain soymilk with no additives. We use WestSoy or Trader Joe’s – both contain only water and whole organic soybeans – nothing else. We have tested it with store-bought almond milk and oat milk, and both were epic fails. It simply turns into oily liquid. If you try other milk beverages and have success, please share in the comments! But as of right now, pure soymilk is the only milk beverage we recommend for this recipe.

Can I Substitute Another Sweetener? The original recipe actually used maple syrup. We prefer the simpler taste with regular cane sugar, but you can use your sweetener of choice. Just keep the flavor of the sweetener in mind – it will influence the taste of the soy whipped cream. Also, it will be softer with a liquid sweetener than a granulated or powdered sweetener.

Can I Use a Different Oil? Yes, most oils will work. Just keep the flavor profile in mind. We use a neutral-tasting oil, like extra-light olive oil, non-GMO canola oil, or grapeseed oil. The original recipe used vegetable oil. Melted coconut oil will also likely work, but it will thicken much more when cold (that could be a good thing for your needs!). Also, I would use a refined coconut oil if you don’t want the soy whipped cream to have a coconut taste.

Can I Use Less Oil? The oil is essential to create the thick cream. You might find that it becomes thick enough for your needs before you’ve added all of the oil. If so, you can stop and save a little. But I typically need close to the full amount. If you are looking for a lighter blend, try tofu whipped cream. I prefer the taste and mouthfeel of this soy whipped cream (yes, it’s a treat!), but that is a good option for nutrition.

Is the Modified Starch Essential? No. As you can see in the photo above, it simply firms the whip up more. You still get a rather thick whipped cream that spoons nicely, and slowly softens onto your dessert. You can see the soy whipped cream without any modified starch in the pictures immediately below. I know it looks downright runny compared to the whip without starch, but it was sitting out for at least 20 minutes while I took the photos, and it didn’t run to the bottom. It just slowly settled into the blueberry groves. It’s very soft, but not runny. 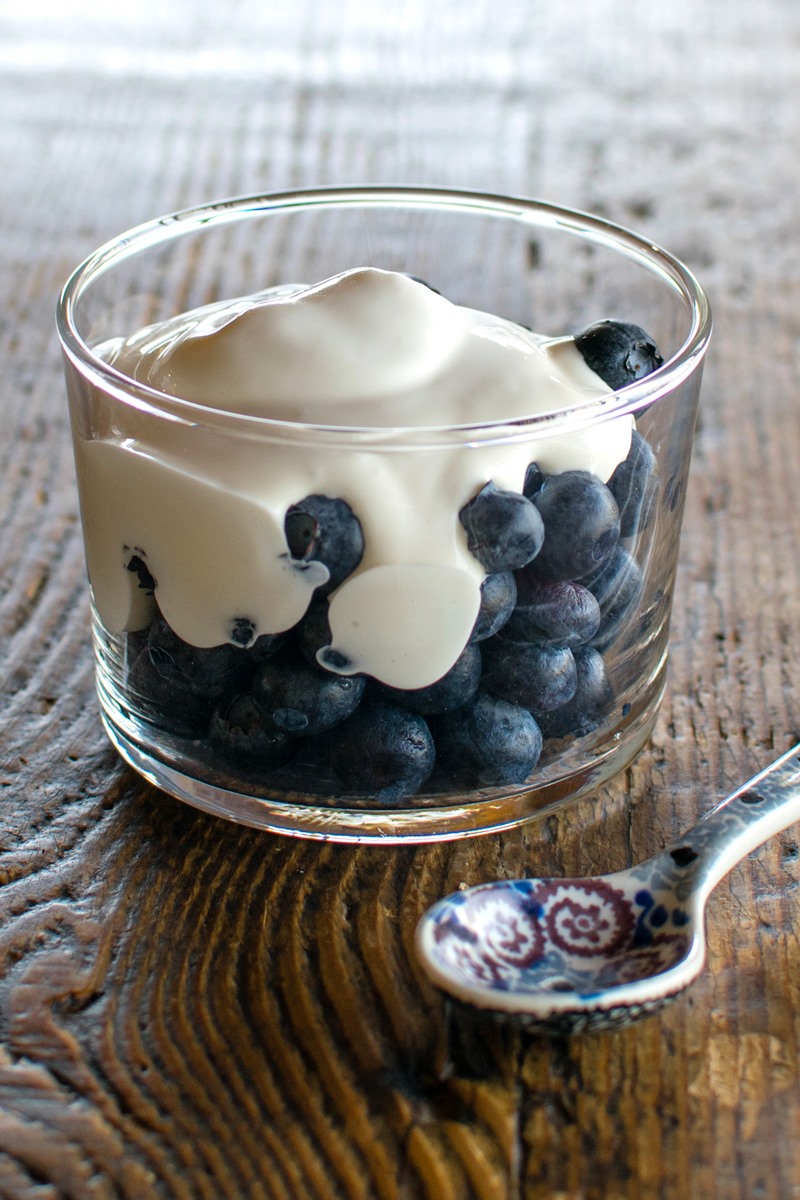 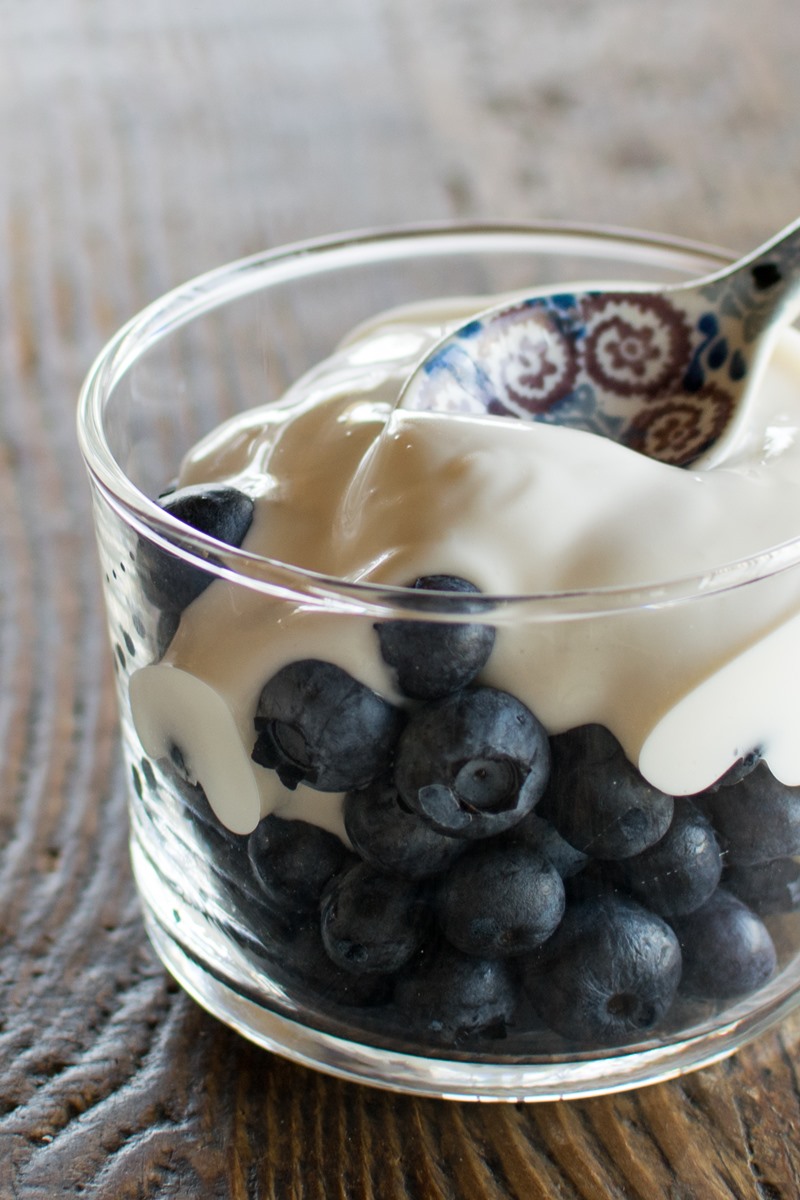 Two Pictures Above: Soy Whipped Cream without stabilizer (modified starch), after sitting out for 20 minutes. It’s still thick and rich, but softer.

Can I Use Cornstarch or Arrowroot instead of Modified Starch? The short answer is, no. Regular starch requires heat to activate and thicken. While it might thicken this whip a tiny bit, you would have to add far more, and it would taste starchy. Modified starch thickens in cold liquid, and you only need a small amount for it to work, so it has a negligible effect on the taste and mouthfeel. It’s used to make Jell-O Instant Pudding and many other foods.

Where Can I Find Modified Starch? It is available in some stores, but I buy it online. I usually just get Dr. Oetker’s Whip It for ease. It is cheap and sold in packets. Technically, one packet is used for 1 cup of “cream,” but I used just half a packet on the whip pictured. If you use the full packet, it will be even thicker. Modified starch is sometimes sold by its name, but you might also see it sold as Expandex or Clear Jel.

Do I Need a High Speed Blender? We’ve made it with a high power blender, and it works very well. Some readers have made it with a regular blender – it just needs to be high speed enough. If the recipe isn’t working, it might be your blender. One reader used a Nutri-bullet – They blended the soymilk, half the oil, the sweetener, and vanilla. Then they added the rest of the oil, and blended it for 5 minutes, stopping halfway through. Use caution as this could heat up your blender too much! When warm, the cream will be runnier, so be sure to refrigerate it for a little while. We don’t recommend making this recipe with a food processor, and are not sure if an immersion blender would work.

Can I Make a Half Batch? The original recipe was actually for a half batch, which is 1/4 cup soymilk, 1/2 cup oil, 2 teaspoons to 1 tablespoon sugar (or other sweetener), and 1/2 teaspoon vanilla. If using modified starch, I recommend about 1 teaspoon or more. I doubled the recipe because a half batch can be a challenge for some larger blenders. But the half batch also works well! In a large high-speed blender, I was able to make a half batch, but once whipped, the blades just spin since there is just a scant 2/3 cup of whip in the bottom. 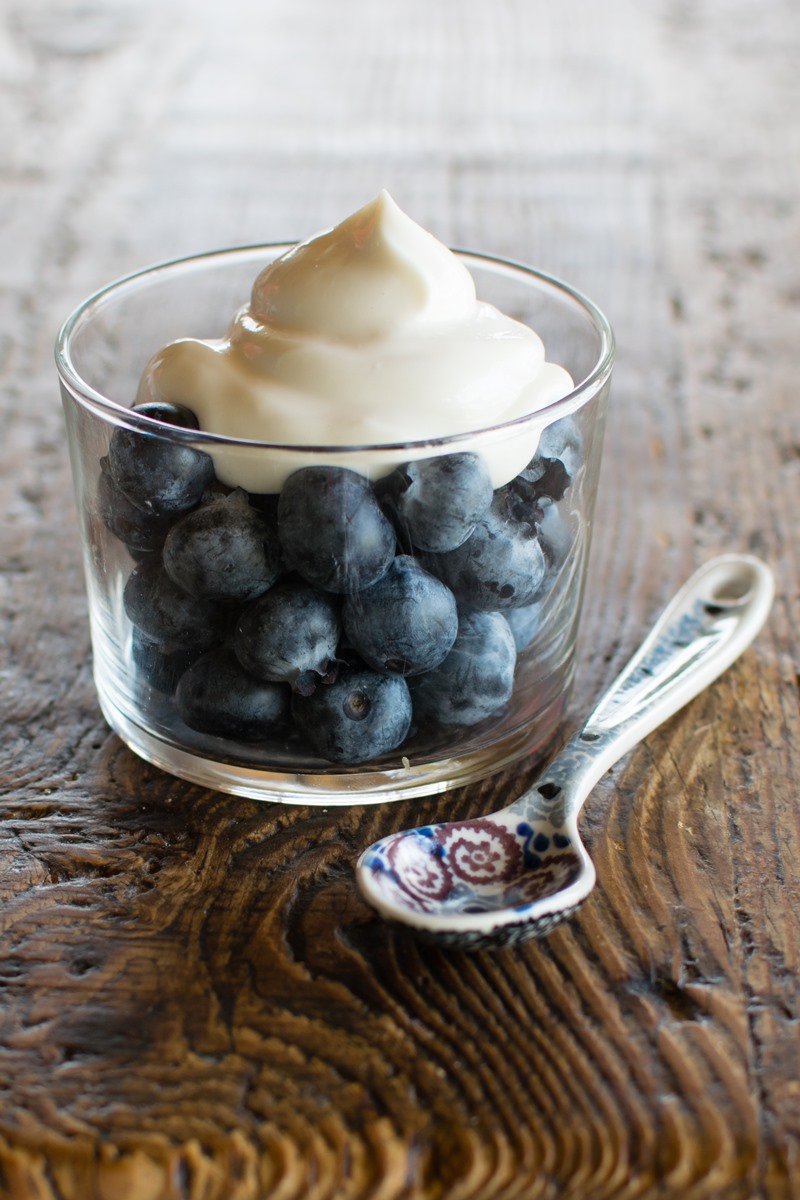 Soy Whipped Cream per the full recipe, after sitting out for 20 minutes, still stable. 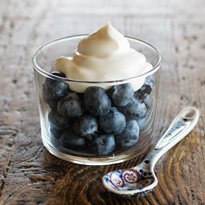 Print
Prep time
5 mins
Total time
5 mins
The hands-on time for making this recipe is literally 5 minutes. But it will thicken more if you allow it to refrigerate. This makes more than enough topping for one pie, or crisp, or angel food cake, or, well you get the picture. Be sure to read the information in the post above for the best results!
Author: Alisa Fleming
Recipe type: Dessert
Cuisine: American
Serves: 1⅓ cups
Ingredients
Instructions
Nutrition Information
Serving size: 1 tablespoon Calories: 93 Fat: 10g Saturated fat: 1.3g Carbohydrates: .9g Sugar: .9g Sodium: 2mg Fiber: .1g Protein: .2g
3.5.3229