Some of you are enjoying summer-like temperatures, while others (like me) are wondering if spring will really show up. But regardless of the actual weather, in March I tend to have hybrid cravings. My taste buds are excited about the spring vegetables that are beginning to pop up, but my not-yet-toasty body temperature is still loving comfort soups and earthy flavors.

For that reason, a creamy potato leek soup like this one fits the bill nicely during seasonal transitions. The fresh leeks, hint of lemongrass, and vegetable broth give a lighter, meat-free springtime spin, but the potatoes offer a creamy, warm vibe that my body still longs for.

The original potato leek soup recipe is adapted from one of my still favorite vegan cookbooks, 500 Vegan Recipes. Half the fun of this massive tomb is trying to guess which of the two authors penned which recipe. Both ladies have been blogging their recipes for quite some time, offering hints of their style. But still, I was stumped on some. This recipe though, is definitely from Joni. I think. 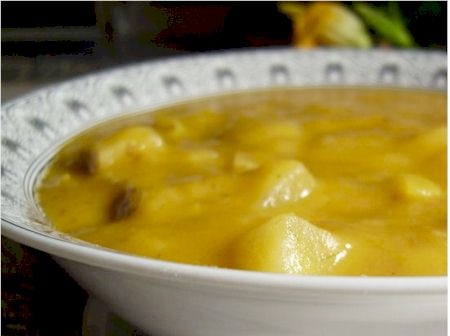 Regardless of who created this creamy potato leek soup, it is delicious and filling! I tend to be one of those people who eats half my body weight at each meal, but a modest bowl of this soup was plenty. On that note, this recipe makes for a perfect vegetarian night meal (Meatless Mondays anyone?), and who doesn’t love leftover soup for lunch?

Also, if you aren’t familiar with lemongrass, don’t be frightened away. Lemongrass is a delightful and fragrant plant that can be found in most supermarkets. Look for it with the small packages of fresh herbs in the refrigerated produce section. If you have an Asian market nearby, even better as it is usually more abundant and less expensive. I actually picked up a big container of dried lemongrass for a great price at World Market. Though fresh is always best, dried lemongrass works beautifully, too, and is quite convenient.

If you can’t find lemongrass, you can omit it, or try this chunky-style Instant Pot Potato Leek Soup from Vegetarian Mamma.