Go Dairy Free had the opportunity to send Hannah, our resident dairy-free ice cream expert, direct to the Vermont factory for a personal tour and tasting of the new Ben & Jerry’s non-dairy ice cream flavors. And we can always count on her for a very honest review …

After decades of craving, years of lobbying, and hundreds of hungry voices calling for action, Ben & Jerry’s has taken the unprecedented initiative to offer a 100% non-dairy frozen dessert. And to say that this brand new line  has sweet teeth celebrating across the country would be an understatement.

Ben & Jerry’s has earned their loyal following through tireless innovation, fearless flavor combinations, and a genuinely inspiring mission statement. Not content to merely spread the sweetness, the brand is arguably more about giving back to back to the community. They’re also trying to make a difference in bigger picture issues. In fact, a big reason for the interest in non-dairy options is to reduce the overall carbon footprint for the mammoth company.

But creating something to smile about for dedicated vegans, those suffering from lactose intolerance, and many dairy-free consumers was the greatest goal, of course, as the demands had been coming in fast and furious. Proving that there are real people at the helm, listening to suggestions (or hungry belly-aching, as it may have been), these four new flavors will be available in most mainstream markets by the beginning of spring.

All of the Ben & Jerry’s Non-Dairy Ice Cream flavors are built upon a foundation of their own finely-tuned blend of almond milk, pea protein, and coconut milk. The right ratios proved elusive, going through 70 to 90 different trials until the base hit all the right creamy, luxurious, and positively decadent notes. I had the chance to sample each flavor, firsthand at the Ben & Jerry’s facility. Flawlessly smooth and luscious, their hard work paid off in full for an impeccable texture that exudes a premium impression at first lick. 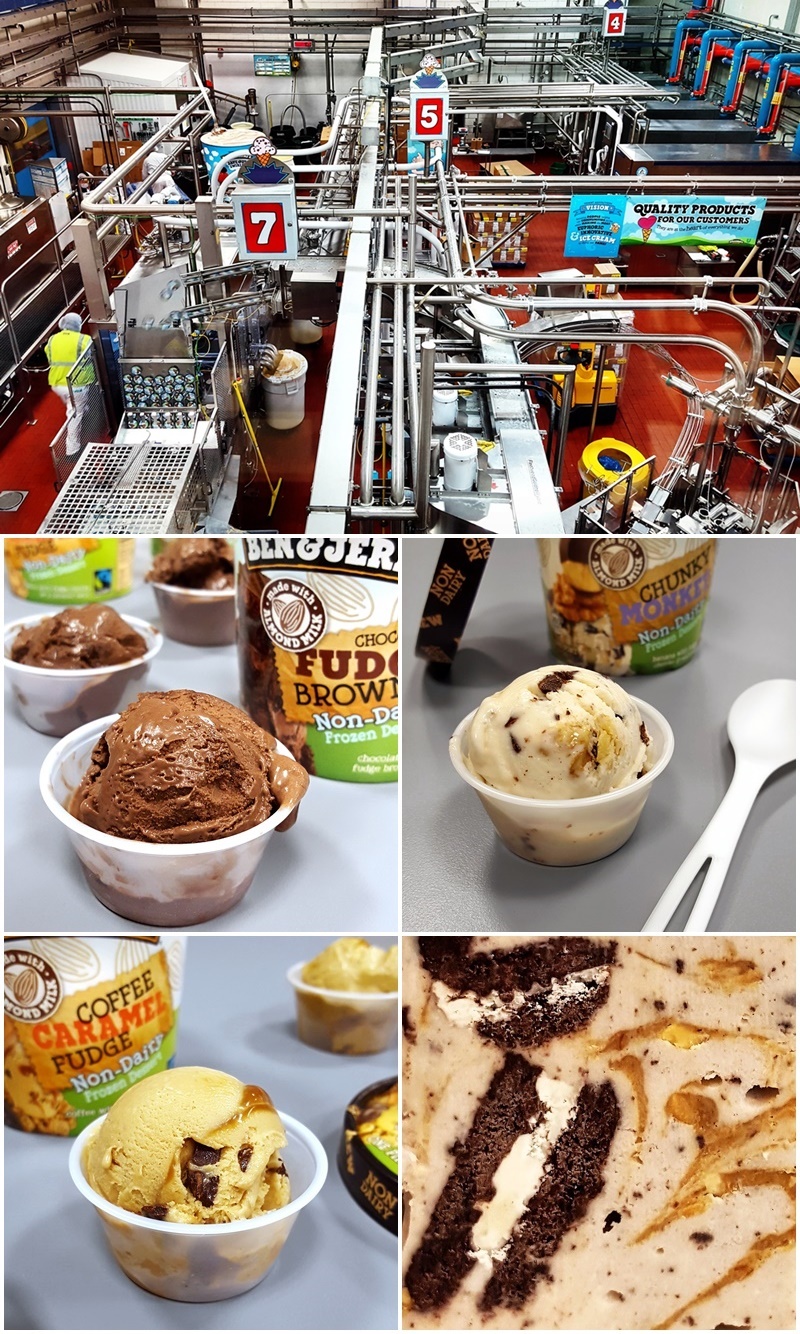 After the above taste-testing, I also trialed a pint of each at home, just to firm up my initial thoughts. Here was my take on each vegan flavor of Ben & Jerry’s Non-Dairy Ice Cream:

This flavor starts with vanilla ice cream and stuffs every square scoopable inch with giant chunks of classic sandwich cookies and thick ribbons of what I can only describe as pure peanut fudge. Pieces of crunchy roasted peanuts complete the overall nutty picture. For peanut butter lovers, this is one little pint of pure, sweet heaven. Easily my favorite of the quartet, every bite sang of bold, sugary peanut flavor, with all the crunchy, chewy, gooey mix-ins one could ever ask for. At some points, I wondered if each spoonful was filled with more cookies than ice cream… Definitely not a bad thing at all.

This flavor offers the frozen dessert equivalent of a dressed up latte. Sure to appease both caffeine addicts and fair-weather fans of the cup of mud. Warm and toasty coffee notes intermingle beautifully with the subtle edginess of burnt sugar in the soft caramel swirl. Strong enough in coffee flavor, but still quite demure as far as a coffee concoction can go. If a milkier cuppa is your thing, you’ll be thrilled by the balance.

Unfortunately, it’s not all smooth sailing in this turbulent sea of frozen almond milk. Things begin to go south a little upon cracking open this container. One of Ben & Jerry’s best known inventions, a time honored and beloved combination of banana ice cream, chocolate fudge pieces, and walnuts, the original has been around since the very beginning. Although it’s been years since my last experience with the pioneering pint, I don’t recall it being quite so intensely and unapologetically sweet. The banana notes proved elusive, hidden behind the cotton candy-like base. Impeccably fresh, crisp walnuts and rich chocolate bombshells brought me back for more. In the end, it’s not the instant winner I had imagined from this ice cream titan.

Layered with more brownie pieces than seems physically possible for a single scoop of ice cream! Those generous squares are the absolute saving grace of the whole assembly. Made by Greyston Bakery and soon to be offered by the brand exclusively in Whole Foods Markets, those fudge bar cookies are more than worth seeking out solo. But sad to say, I wouldn’t have known that the base itself was meant to be chocolate if I had tasted it blind. Even Jostein Solheim, CEO of Ben and Jerry’s, readily admits, “The chocolate one is too chalky for me. It’s a hard product to make”. True enough, the taste is reminiscent of a cocoa protein shake at best. Thankfully, those abundant brownie pieces do reinforce the decadent dessert angle. Despite catering to a market of alternative eaters, these treats were never intended to be health food, after all.

All in all, there’s a lot here to love, and it’s part of a bigger evolution. The goal is for Ben & Jerry’s to reduce carbon emissions by a whopping 80% by the year 2050, despite continuing to grow the business and put even greater demands on their factories. The only way to accomplish that is by making dairy-free desserts a bigger piece of the puzzle.

Will the non-dairy flavors be in the Scoop Shops? For the full ice cream parlor experience, the P.B. & Cookies will soon be available in Ben & Jerry’s scoop shops nationwide.

Do they really still care about the environment? Since Ben & Jerry’s was bought by Unilever, their “corporate conscience” has been called into question. Nonetheless, it looks like they are still making efforts. Evidenced by the vegan, non-GMO and fair trade certifications and Hannah’s notes above. Even so, she diligently inquired to dig beyond the mission statement they were waving … going straight to a current concern: almond sourcing. Since Ben & Jerry’s Non-Dairy Ice Cream is almond-based, how do they address the controversy over California almonds and the water supply? She confirmed that they do actually get over 80% of their almonds from Israel instead, to reduce the strain on the limited resources domestically. This may create mixed emotions, since it is outsourcing outside of North America, but it’s hard to win them all.

Do they us xyz in the ingredients? This is not health food. If you are looking for the purest of ingredients rather than an occasional dessert, move on. But they are carrageenan-free (except for the Coffee Caramel Fudge)!

Are they “allergen safe”? With highly sensitive milk allergies (and other food allergies) I would use caution with Ben & Jerry’s Non-Dairy Frozen Dessert. Hannah inquired on site and they do use the same equipment for both their non-dairy and dairy-based ice cream flavors. The lines receive a very thorough and complete washout between batches. This may be enough for those who are vegan, lactose intolerant, or who have a milder milk allergy. For my gluten-free friends, only the Chunky Monkey is made without gluten (the cookie and brownie flavors contain wheat flour while the coffee one contains barley). I’m guessing that cross-contamination with gluten could be a real possibility in all flavors. Nonetheless, Ben & Jerry’s is reportedly in the process of exploring gluten-free options for the future. 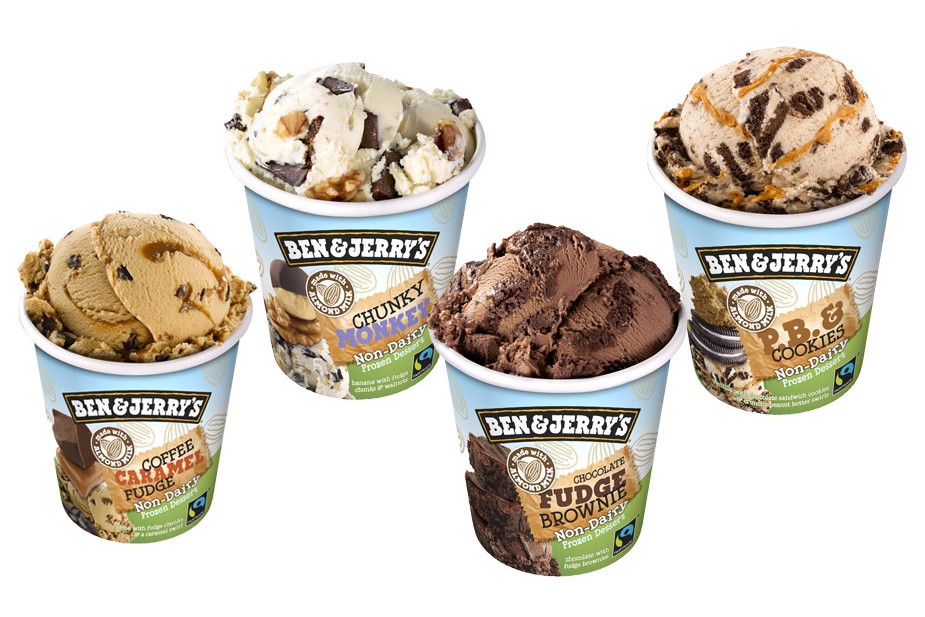 Dietary Notes: By ingredients, Ben & Jerry’s Non-Dairy Ice Cream is dairy-free / non-dairy, egg-free, vegan / plant-based, and vegetarian. Select varieties are made without wheat (just one is made without gluten), and all contain soy lecithin. Nonetheless, check with the company on their manufacturing processes for all varieties if potential allergen cross-contamination is an issue for you. Processes and labeling are subject to change at any time for any company / product.