Alisa Fleming, February 2007 ~ It is true, we may soon be emerging from the wishful thinking phase.  Though it has yet to hit my doctor’s recommended diet list, cocoa is making significant headway into the world of ‘superfoods.’  Recent reports have pegged the flavanols in chocolate as skin protecting, heart-healthy, and now brain boosting.

A study publicized this past week demonstrated the ability of flavanol-rich cocoa to increase cerebral blood flow to gray matter.  Loosely translated, cocoa may offer potential prevention and treatment options for vascular impairment, including dementia and strokes.  Plus, the increase in brain circulation could help with daily fatigue and sleep deprivation.

Related studies tout the aspirin like effect of cocoa flavanols.  In promotion of heart-health, it appears that high-flavanol foods may improve overall blood flow, reduce blood clotting, and cool inflammation.

This good news adds to other beneficial flavanol findings from 2006.  For example, German scientists found that daily consumption of high-flavanol cocoa offered protection against several types of sun damage.  Although chocolate does not yet pose a threat to sunscreen, the possibility for smoother and healthier skin could brighten the moods of many chocoholics.

So what are these flavanols?  Flavanols are a type of flavonoid, or plant-based antioxidants active in the fight against free radicals.  Though not quite as indulgent as a bar of dark chocolate, green and black tea, various fruits, and some vegetables are also rich in beneficial flavanols.

To keep things in perspective, most of the above noted studies were very (very) small, with less than 25 participants.  It should also be disclosed that Mars, the world’s largest chocolate company, has had a very big hand in the funding of recent cocoa flavanol studies.  However, since it is chocolate, I have no plans to publicly question the validity of their findings at this point.

Yet, there is one definite catch.  Flavanols add such a bitter taste to chocolate, that they are usually removed in processing.  Most of the research noted has focused on unsweetened cocoa or specially formulated high-flavanol chocolate, not the type we typically buy in the grocery store.  As chocolate moves from bean to bar, flavanols are lost within each processing step.

Luckily, all is not lost.  To get the most flavanol power for your money, consider the following indulgent options:

Reach for regular, unsweetened cocoa rather than the milder Dutch process cocoa.

Get the good stuff, dark chocolate.  The higher the cocoa content, the better your antioxidant odds.  50% may suit beginners, with more of a semi-sweet chocolate flavor.  Once your taste buds have adapted, reach for the 70% plus bars.

Treat yourself to some high quality products.  The folks at Sweetriot produce fair trade, dark chocolate-coated cacao beans with loads of all-natural cacao ingredients.  I have yet to trial their nibs, but a third-party review left me hoping that they might send a sample my way.

Keep an eye on the large manufacturers.  Not surprisingly, the scientists at Mars have come out with some high-flavanol chocolates.  Their relatively new line of CocoaVia® snacks has been produced using a patented Cocoapro® process for preserving flavanols.  Be aware that a few of the CocoaVia® products do contain hydrogenated oils, and may have other not-so-healthy ingredients.  However, I was elated to see that they have produced a few non-hydrogenated, mainstream dark chocolate CocoaVia® bars, which are also free of unnecessary milk solids.  It is rumored that the fabulous Swiss chocolatier, Barry Callebaut, has patented another “healthy” cocoa process, ACTICOA™. 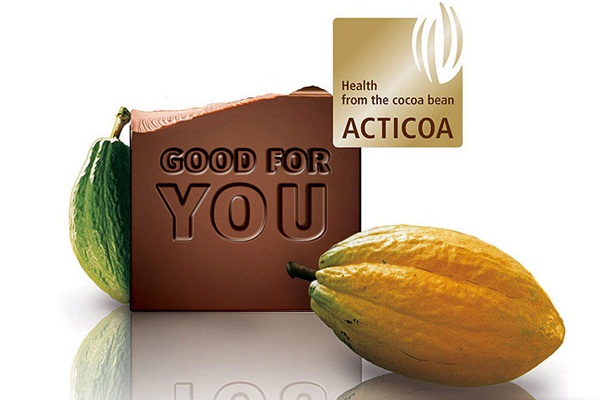 While I am adding the Sweetriot nibs to my foodie wish list, I will make another batch of my favorite cocoa rich food, dairy-free chocolate brownies!