If I had half stars with our ratings, this would definitely be bumped up to a 3.5. The flavor is pleasant, and it's one of the very few dairy-free, gluten-free mac 'n cheeses that Tony said he would eat again. That said, it is nearly void of cheesiness, tasting more like good buttery noodles, the macaroni didn't cook to that nice tender texture we all love, and the serving sizes are very small - it wouldn't be that hard for one person to polish off a box!

As we were working our way through dairy-free mac ‘n cheese taste tests, I discovered a new-to-me brand, Pastariso. They make gluten-free fortified pasta and quick meals, and though most of their conveniences use dairy, they have one product that fit our criteria: Pastariso Vegan Mac Uncheddar. 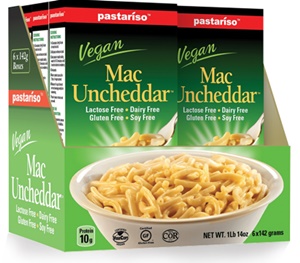 Pastariso Vegan Mac Uncheddar has one-pot preparation, which is always appreciated in box meals. The gluten-free noodles, which are cooked first, were brown and white rice-based and it was noticeable. They aren’t bad, but don’t cook to the nice tender consistency we’ve come to love over the years. That said, unlike some of the other brands, these noodles do hold their shape completely, from prep to devoured.

The sauce in Pastariso Vegan Mac Uncheddar has a wonderfully smooth, creamy finish once stirred in. I bubbled ours down for 30 seconds or so, as it was just a touch thinner than I prefer. It was good, quite tasty in fact, but just barely cheesy. I liked that it was salted enough, so the flavor held up well even with add-ins. That said, it was more like a rich, seasoned buttery sauce than a cheesy mac. Perhaps due to the fact there is no nutritional yeast and no flavoring. Which some people may prefer. To note, if you are eating Pastariso Vegan Mac Uncheddar straight up (with no add-ins), and you’re sensitive to salt, you may want to cut the buttery spread a little and use some oil in its place.

Pastariso Vegan Mac Uncheddar is higher in protein than most (10 grams per serving). Although the servings are small – really small. We split the box (which stated 2.5 servings) added veggies and more, and still weren’t full. For the price, I felt there should be more per box, but for a nostalgic high protein snack or meal, it could fit the bill. 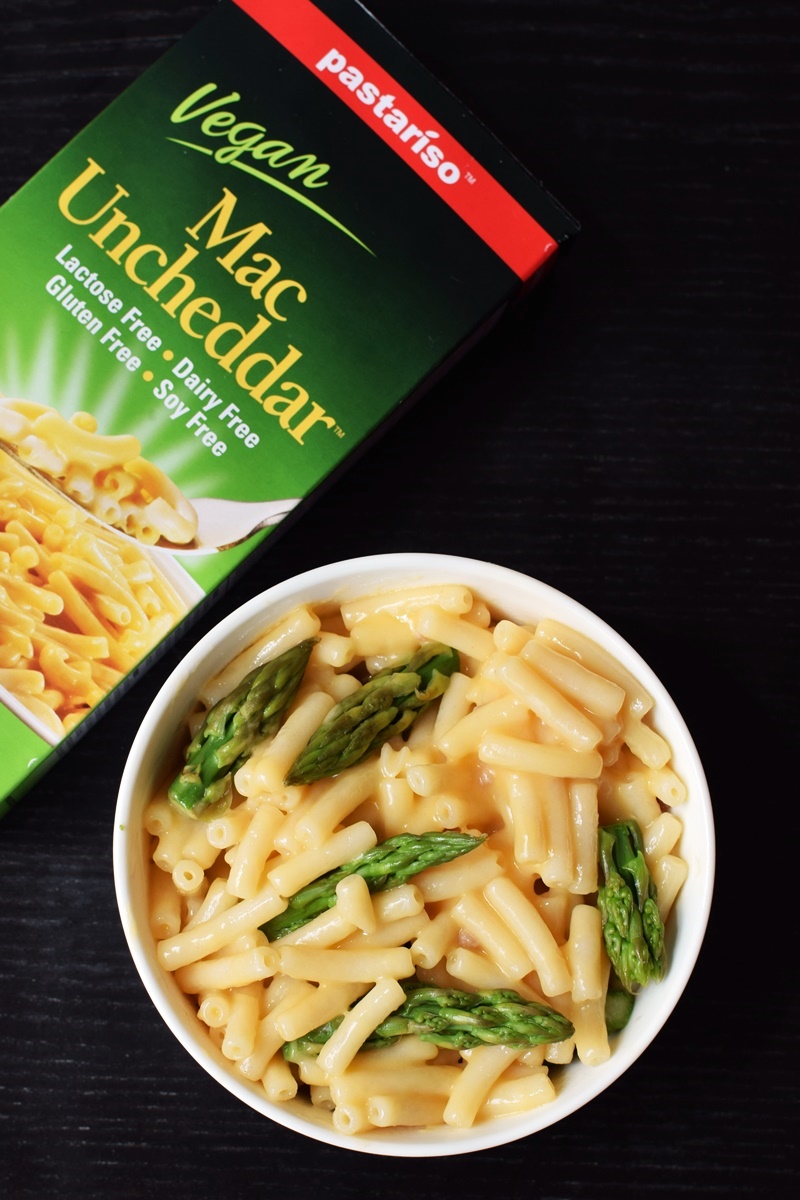 Availability: Pastariso Vegan Mac Uncheddar is sold in stores and online the U.S. (we purchased ours at Whole Foods). The Pastariso brand is also sold in Canada, though we couldn’t verify if the vegan product is in stores there as of yet.

Dietary Notes: By ingredients, Pastariso Vegan Mac Uncheddar is dairy-free / non-dairy, egg-free, gluten-free, nut-free, peanut-free, soy-free, vegan / plant-based, and vegetarian. Nonetheless, always read the ingredient statement and check with the company on their manufacturing processes for all varieties if potential allergen cross-contamination is an issue for you. Processes and labeling are subject to change at any time for any company / product.

For More Product Information: Visit the Pastariso website at www.pastarisofoods.com.