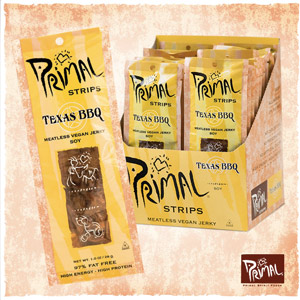 These wonderful little snacks called Primal Strips attracted my eye at our local natural food store.  With the packaging and image of meat jerky, I was a bit surprised to discover that they were in fact vegan!

I do love eating vegan, yes, I am a huge fruit, vegetable, and grain fan.  I always have been.  But, quite frankly, if I really want the flavor of meat, it has always seemed logical to me to eat…well…meat.  I love veggie burgers, but not the ones that are made to look and taste like meat.  Rather, I like the grain and mushroom based ones that are supposed to be actual vegetable burgers.  As much as I love to follow a vegan diet, I have just never felt the need to go for meat substitutes.

That being said, I somehow felt these meatless snacks deserved a shot.  After all they just recently won a Best New Vegetarian Product Award.

The Primal Strips come in six flavors, broken down into three types, soy-based, seitan-style, and shiitake mushroom.  With three categories in front of me, I decided to do three reviews.  Though quite similar, each seems to target a different audience.  So I started with the soy-based varieties of Texas BBQ and Hickory Smoked. 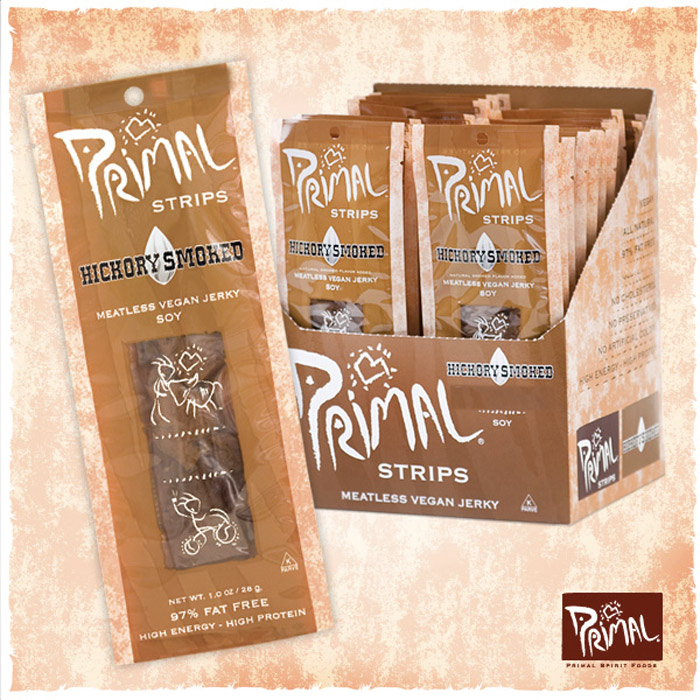 Requiring a dose of protein after some strenuous soccer matches, I brought these flavors along for a post tournament snack.  As expected, I think the soy based flavors were the meatiest of the bunch.  To my surprise, they tore apart with ease, and shredded “meat-style.”  The texture was chewy, but not tough, and really quite delightful.  Though I can’t speak for all, this jerky may actually fool me if I didn’t know in advance that it was vegan.

This flavor packs some serious protein for a low calorie punch!  With just 81 calories for a generous amount of jerky, I received 10 grams of protein and only 1 gram of fat.  The sugars were at 5 grams, more than I like in a “meat” snack, but not bad in the grand scheme of things.

As for the flavor, a small disclaimer should be made, I am addicted to all things barbecue flavored.  There may be some slight biased here.  That being said, this was a mild and sweet jerky with a wonderful barbecue flavor.  This chewy and delicious snack is one I wouldn’t hesitate to experience again.

This one packed the same protein punch, with just a tad more calories (99) and fat (3g).  The sugars were slightly more in check at just 3g as well.  Tastewise it was a bit sweet, with an obvious “smoky” addition.  I wasn’t surprised to see smoke flavoring in the ingredients, though the licorice root did surprise me.  Overall, I didn’t find the flavor overpowering.  It had just a touch of spice that emerged as an aftertaste.  I am still a bigger fan of all thing BBQ, but this was still pretty good and worth another “chew.”

Where to Purchase: Primal Strips are sold in stores throughout the U.S. and Canada.  Though they do not have a store locator on the Primal Spirit website, I am sure if you contact them they will be happy to help you locate some!  If you search the web, it also seems to be available from a few vegan online vendors

The Facts on Soy Primal Strips

Dietary Notes: By ingredients, these Primal Strips are dairy-free / non-dairy, egg-free, gluten-free, grain-free, nut-free, peanut-free, vegan / plant-based, vegetarian. Nonetheless, always read the ingredient statement and check with the company on their manufacturing processes for all varieties if potential allergen cross-contamination is an issue for you. Processes and labeling are subject to change at any time for any company / product.