Every time you consume dairy, your digestive tract stages a revolt. Your food allergy tests came back negative, so your doctor labeled it as lactose intolerance. “Just take some enzymes and you’ll be fine,” she said. But your dairy woes didn’t stop. Now a research team in New Zealand is here to back you up. You might have dairy intolerance, which they say is a very real thing.

“Lots of people suspect that they have some intolerance to dairy foods, but testing shows they aren’t lactose intolerant,” says Dr Amber Milan, a research fellow at the Liggins Institute, University of Auckland. “Our findings show dairy intolerance is a ‘real thing’ with a particular symptom profile – not something that’s just in people’s heads.”

Her team gave 30 healthy young women who reported being dairy intolerant, and a control group of 10 dairy-consuming women, two challenges. The first involved drinking 50 grams of lactose – the amount found in 1 liter of milk – to determine if they had lactose intolerance or not. On a separate visit, the same women drank 750 milliliters (about 3 cups) of standard dairy milk.

The researchers closely tracked each woman’s digestion and metabolism of the milk with a battery of tests. Immediately after the women consumed the milk, and at 30 minute intervals for three hours, the researchers took blood, urine and breath samples, measured their waist, and performed MRI scans. The women also recorded how they felt.

Two distinct symptom patterns emerged. Most notably, the discomfort and other symptoms came on and subsided sooner in the dairy intolerant women. This suggested their underlying issues occurred in the stomach. The lactose intolerant women experienced symptoms over a longer period, which suggested the trouble arose in the small intestines.

The lactose intolerant women experienced the standard symptoms of flatulence, stomach rumbling and cramping. Many of these symptoms were experienced around two hours after drinking the lactose or milk. Their hydrogen breath levels also peaked at two hours, and were up to 10 times above their baseline. Breath hydrogen is a by-product of the gut bacteria digesting lactose that isn’t absorbed by the body.

The dairy intolerant women also experienced acute stomach pain, bloating, flatulence, and distension. However, their symptoms arose within 30 to 60 minutes of dairy consumption. And they showed no signs of lactose malabsorption, such as raised breath hydrogen.

“With these women, it was as if their stomachs weren’t digesting the milk as quickly. We need more research to identify exactly what’s going on, but we know that some nutrients affect the speed of digestion, like fiber or the type of protein; as can the release of hormones, such as insulin and appetite hormones,” says Dr Milan.

The dairy intolerant group also had a drop in blood sugar around the time that they felt most discomfort. But the lactose intolerant and control groups didn’t experience a notable change in blood sugar.

Researchers also identified trends in different chemicals found in the breath of the lactose and dairy intolerant groups. “If further work confirms these differences, it may allow us to create a breath test to determine if people are intolerant to other aspects of dairy, like we currently do for lactose using breath hydrogen,” says Dr Milan.

But is it Just a Dairy Intolerance?

There is one missing piece of very important information in this report. Did the researchers test the “dairy intolerant” women for non-IgE mediated allergies? In conditions like allergic eosinophilic esophagitis (EE) and eosinophilic gastroenteritis (EG), symptoms noted by the researchers can be triggered by foods such as dairy.

An intolerance is the inability to properly digest something. Your body angrily acts up when it’s unable to absorb the offending food. But an allergy involves an immune response in which cells in your body are actually attacking the food as if it’s a threat. Symptoms of a non-IgE allergy can range from mild to severe. In some cases, immune responses also have the potential to cause damage and may be more dangerous than an intolerance.

For now, we’re happy the medical community is finally acknowledging that dairy issues are not just black and white. But further studies are needed to identify the “dairy intolerance” sources. There might be many more shades of gray than the researchers anticipated. 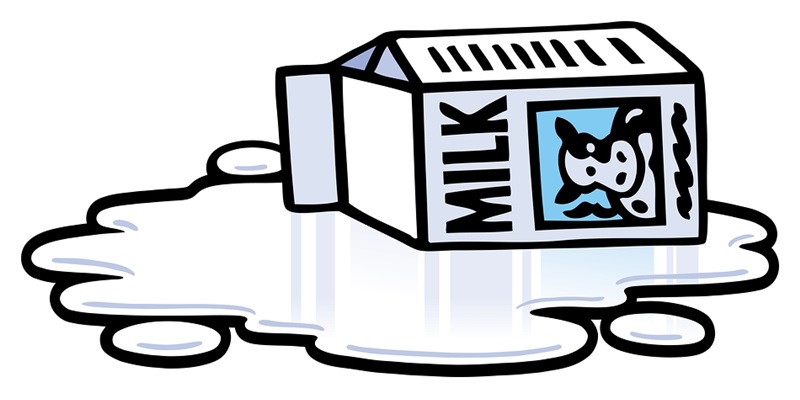