Five different store visits and three marketing people later, and I finally got an answer to what’s dairy-free at Ben & Jerry’s scoop shops. And it’s just in time for their Free Cone Day! 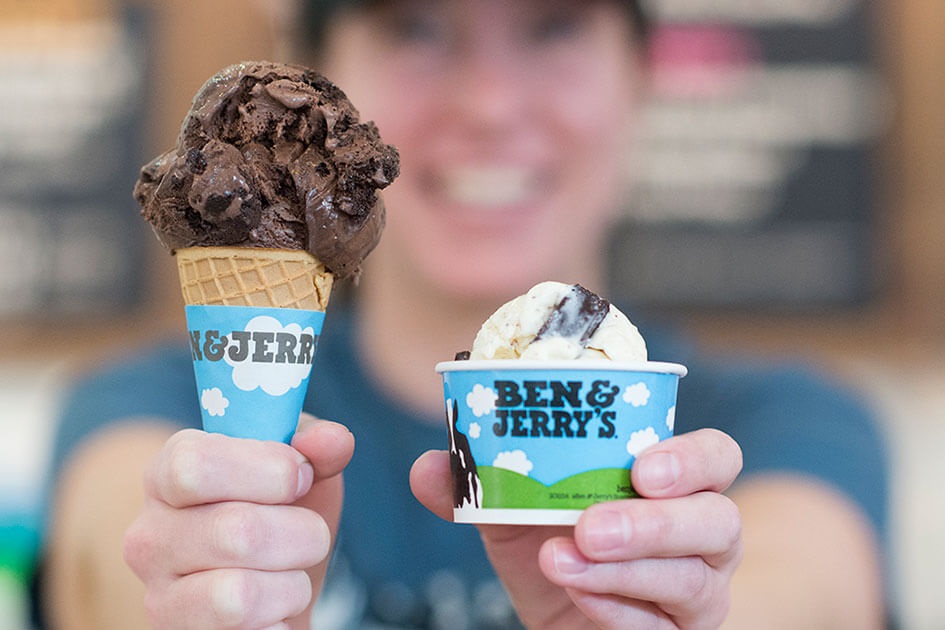 I think you will be pleasantly surprised by how friendly their scoop shops have become to dairy-free and vegan dessert lovers!

Dairy-Free Ice Cream by the Scoop

Almost all Ben & Jerry’s Scoop Shops now serve one or two flavors of their creamy Non-Dairy Frozen Dessert by the scoop, and sometimes by the pint. At last check, these vegan flavors were on rotation in the US, Canada, and Australia:

And although they aren’t sold by the pint, Ben & Jerry’s Scoop Shops have Non-Dairy Sorbets available by the scoop. In the US, Canada, and Australia, you can usually find these fruity choices:

In the UK, Ben & Jerry’s Scoop Shops appear to be adding non-dairy menus, but these options aren’t listed on their website yet. In their London Soho shop, you can already get vegan chocolate chip cookie ice cream sandwiches and other frozen desserts made with local vegan brownies and dairy-free whipped cream. 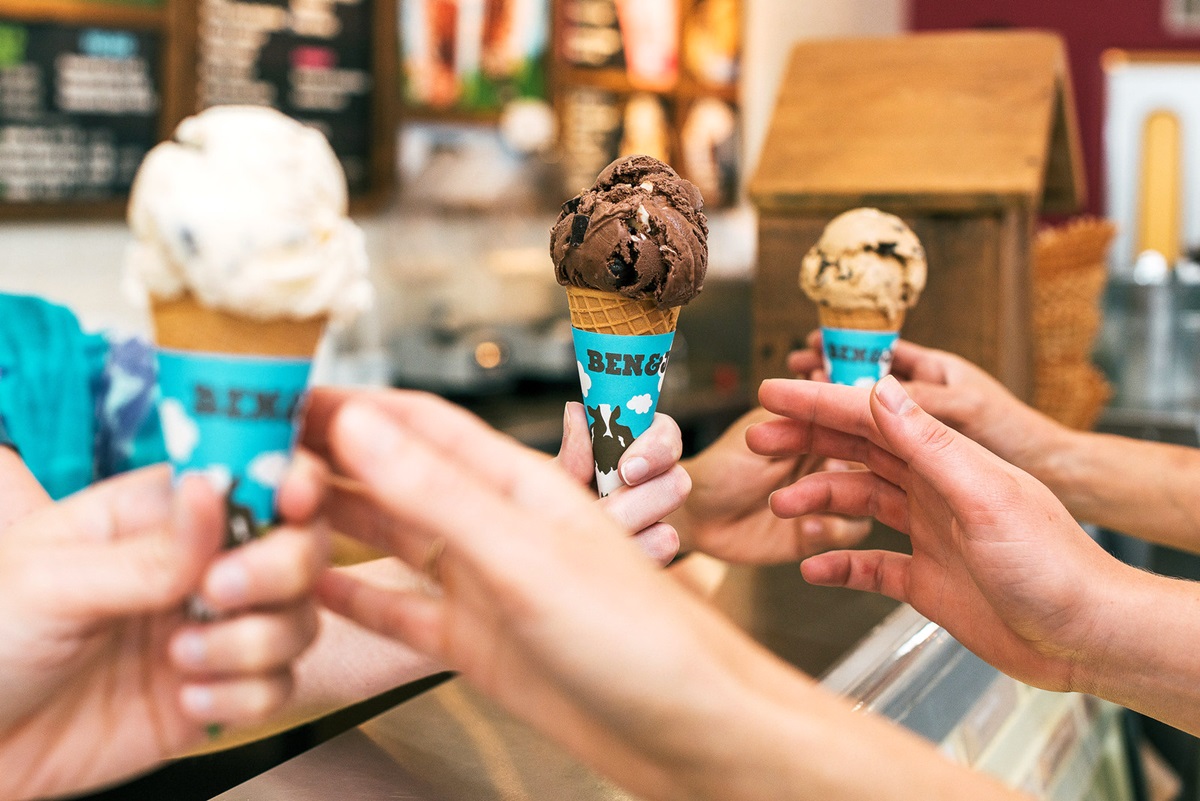 Several exclusive menu items are non-dairy across the entire Ben & Jerry’s franchise network. They include:

Many of the toppings, including sprinkles, are sourced by the franchisees. So you have to check at your local Ben & Jerry’s Scoop Shop to see if those items are dairy-free and safe for your needs.

In 2018, select Ben & Jerry’s Scoop Shops in the US began making non-dairy and vegan ice cream cakes on request. They include layers of non-dairy ice cream and vegan cookie crumbles (or other toppings of choice), and are finished with dairy-free frosting. We were unable to find a shop locally that had these cakes, but check with your local scoop shop to see if they are filling vegan ice cream cake orders. 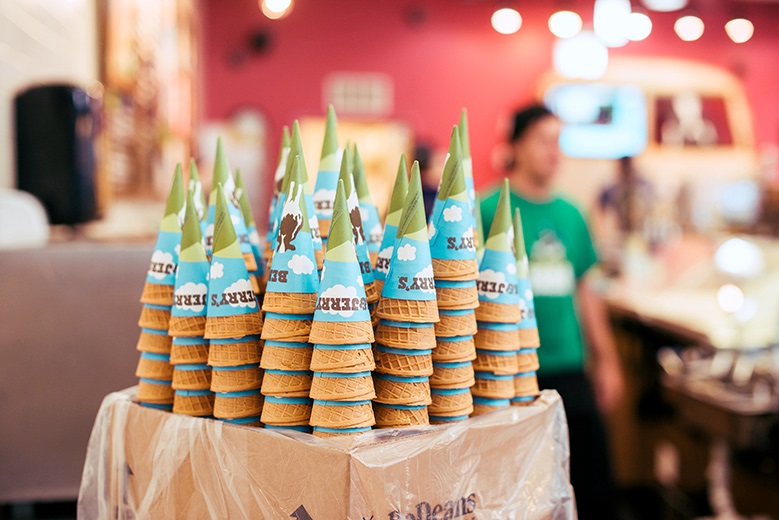 Ben & Jerry’s Free Cone Day is for Dairy-Free Customers Too!

2019 Update! November 1st is World Vegan Day, and Ben & Jerry’s has decided to celebrate with nationwide happy hours at participating Scoop Shops. From 4pm to 8pm, customers can walk right in and get a FREE scoop of their non-dairy ice cream. There’s no catch, just vegan frozen dessert for all. 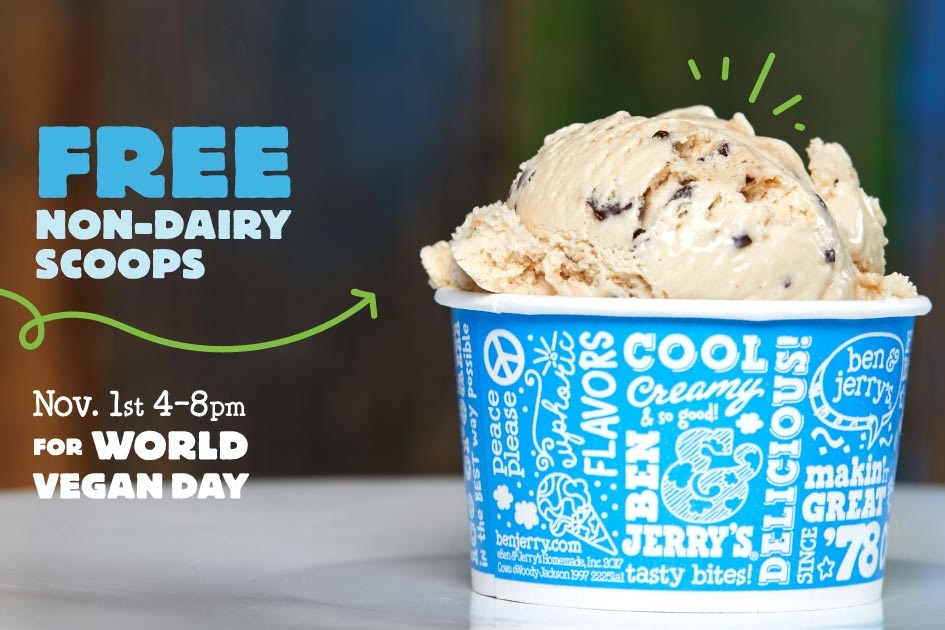 They have locations worldwide, with the biggest concentrations in the US, Canada, UK, and Australia. I’ve linked to each country’s website so that you can get more details.