This personal story was shared with us by Foods Matter, from their December issue. The author found relief from eczema through dietary changes like dairy-free living, but also through hydrotherapy. Because eczema is common among those with food allergies and intolerance, we wanted to share this helpful story.

Sara Hannan describes her family’s experience with the healing waters of Avène-les-Bains in southwestern France. It’s a hydrotherapy centre which is renowned for its success with eczema and psoriasis.  If you are racking your brains for a present for an eczema or psoriasis sufferer this Christmas, gift them a stay in Avène-les-Bains. It’s a tiny village in beautiful south-west France and home to the Avène hydrotherapy centre. 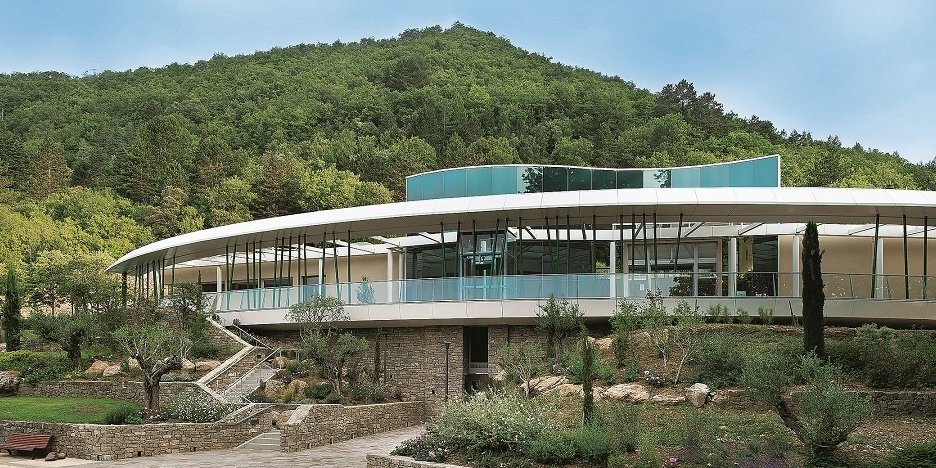 My battle with eczema

My own battle with eczema began in my first months. Of course in 1971 breastfeeding was out of fashion. My mother was given an injection to dry up her milk, without even being asked if she wanted to try feeding.  We now know that dairy products are highly problematic for atopic people. If you have eczema, whether or not you have ‘tested’ positive for a dairy allergy,  you should try cutting out dairy products for a couple of months.

Back then – as is sometimes the case even now – no connection was made between diet and skin conditions. So I bumbled along with eczema and allergies, hayfever and ‘bronchitis’ (actually misdiagnosed asthma) and stuffed myself full of steroids, antibiotics and antihistamines. I reacted so violently to one particular vaccination that my mother was brave enough to refuse the rest.

Relief came when I was about eight in the form of a herbalist, who changed our diets. She rid my mother, permanently, of rheumatoid arthritis and me of my eczema for the remainder of my childhood years.  My next flare-up came after O-levels. I now realise that this was not to do with the stress of exams, but was the result of a brace which was slowly dislocating the disks of cartilage in my jaw, and thereby placing my body under terrible strain. The holistic dentist who diagnosed my jaw problem three years ago was convinced that most of my health problems (eczema, candida and digestive problems) were due to the misalignment of my jaw.

My skin worsened in my late twenties, although it usually improved with homeopathy and diet. But, after a particularly stressful period at work, the final straw came when I became pregnant with my first child. I was covered in eczema and riddled, with candida. My body went into overdrive to protect my baby, but left the rest of me in a terrible state. I’d chanced upon an article about Avène, and as soon as I got to 14 weeks, I packed my bags and got on a train (flying plays havoc with dry skin) to Montpellier.

I had no idea what to expect – the brochures at the time weren’t exactly explanatory. And even though I speak French, I hadn’t understood that the recommended stay is three weeks. So I was only booked in for the minimum two. But the effects were still astounding.

My anti-candida diet and homeopathy had been having some effect, but as soon as I began the daily baths and showers and to drink the water my skin began to heal. I returned home with clear skin and – so I was told – ‘blooming’. My skin did take a slight turn for the worse in the final trimester – an indication that there were still underlying problems. But that first short visit to Avène had given me a respite in the middle of an otherwise difficult pregnancy. It also introduced me to a magical haven where I have been able to return almost every summer since.

On each of my subsequent visits, my skin has improved. We did not go last year – my skin was fine and I’d just given birth to my second daughter. But I did need a healing boost this year when, after lots of stress, old (bad) dietary habits returned and chickenpox got me.  I firmly believe that I can be completely eczema free again, but I shall probably need at least another summer holiday in Avène.

My elder daughter, on the other hand, needed only two visits to banish her eczema. I did everything I knew possible at the time to prevent her from developing allergies or eczema: breastfeeding for 17 months, and exclusively for seven; super-careful weaning and avoidance of the usual suspects, dairy and wheat, until long after she was one; goat’s milk to drink rather than cow’s; no citrus and no red fruits or vegetables (all terrible for eczema); no vaccinations and only homeopathic medicine – I’ve never owned a bottle of Calpol.  But despite all of this, she would still develop the odd, small patch of eczema. We were always able to clear it with homeopathy, cranial osteopath or the avoidance of certain foods, but the tendency was clearly there.

Two weeks in Avène, two years in a row, aged one and two, with one 20-minute bath a day,  were enough for her. The water initially seemed to ‘bring it all out’, much to my husband’s alarm. However, his skepticism vanished, along with my daughter’s eczema. She is now nearly five, and has had completely clear skin since.

The Avène centre can feel quite medical – worlds away from the pampering you might expect at a health farm or  spa. You do see a doctor your arrival but the actual treatments – baths, showers, sprays and compresses with nothing but the water – last for only about one hour in total each day.

So it is the water alone that has these extraordinary effects. There is plenty of scientific literature on its healing, soothing and anti-inflammatory properties, and an ongoing research programme. Personally, I would like to see them do more research into the healing action of the water on the gut, as it is absolutely clear to me that drinking the water is just as important as being immersed in it.

The staff also runs informative workshops on how to manage your skin on a daily basis. I wish every British dermatologist knew these tips:

If I have one criticism of the  centre, it is that they never discuss diet, which to me is so crucial in the management, prevention and cure of eczema and psoriasis.

Skin conditions are complex and there is never one simple answer. My success has depended on a range of complementary practitioners and the amazing eczema diet from The Alternative Centre in west London (020 7381 2298 www.thealternativecentre.co.uk) as well as visits to Avène. But it is at Avène that I have experienced the most dramatic improvements. May others find it equally helpful.

Amy is a beautiful, confident teenager whose body just seven years ago was so badly (98%) covered with psoriasis that her doctors were threatening to take her parents to court to force chemotherapy on her.   A newspaper article about Avène led them there, and the rest, like her psoriasis, is history. Her family has bought a house nearby, and they return at least once a year.

Two years ago in Avène, I witnessed the arrival of a group of children from Great Ormond Street. It was distressing to see their suffering, which wasn’t alleviated by conventional steroid and antibiotic treatments. They had not, apparently, had a word of dietary advice. They were tucking into sweets, fizzy drinks, orange juice, pains au chocolat, cheese, hamburgers, chips and tomato ketchup – all foods known to aggravate or even cause eczema.

The children got better over the three weeks that they were there.  In some cases, the results were truly dramatic. One girl with psoriasis was able to abandon her wheelchair after only a couple of days. But others would require further visits. I couldn’t help but wonder how they would have fared had they been following a more eczema-friendly diet.

Sadly, British dermatologists seem to be unaware of the existence of the healing waters of Avène – which they can now prescribe for their patients on the NHS. Instead too often they rely on drugs which, if they work at all, suppress rather than cure. For more information on the Avène centre, visit www.avenecenter.com/en.