Tony and I do almost EVERYTHING together. We’ve worked together for 20 years. Our time off is spent on long walks, trips, and just shopping, together. New endeavors like P90X are tackled together. And yes, he even went strictly dairy-free with me many years ago. So when I was asked to take the GoodBelly Reboot, it was a no-brainer – the husband and wife challenge was on! 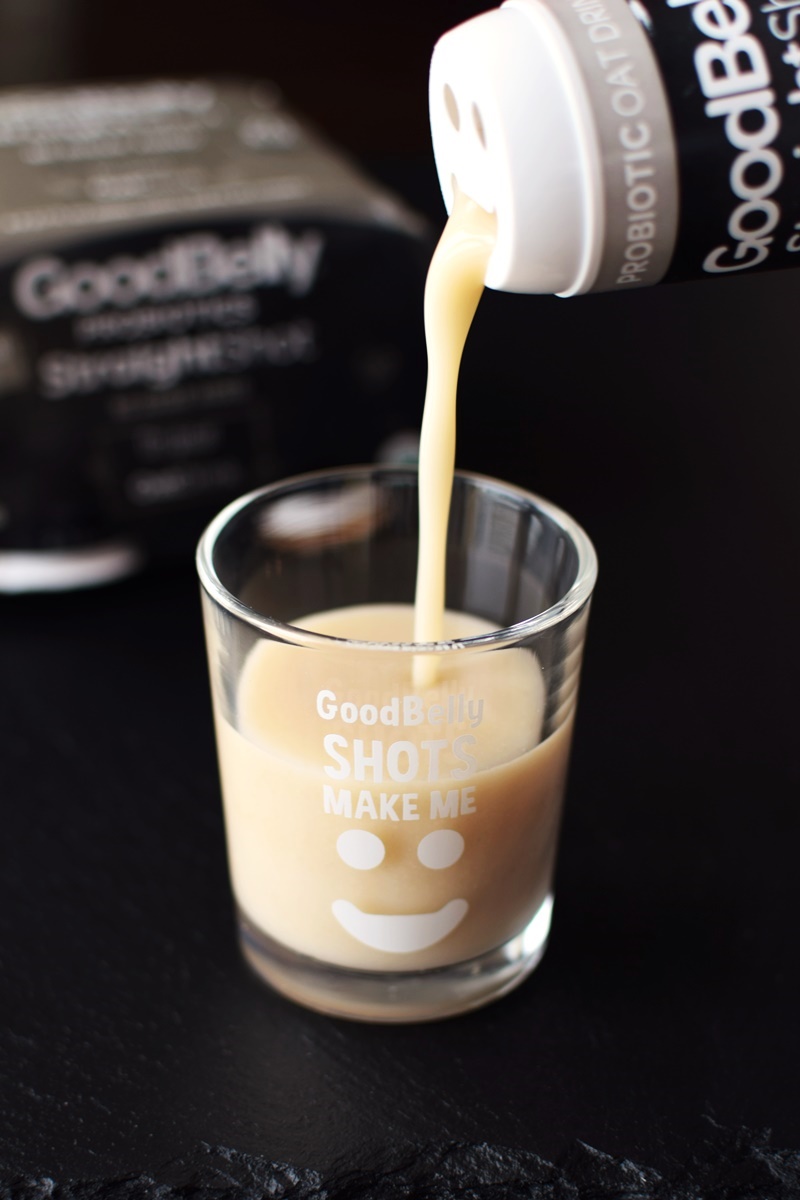 This post is sponsored by GoodBelly in honor of their 12-Day Belly Reboot, which officially begins on January 19th! But the opinions are my own and the results are 100% honest. In fact, as a result of taking the GoodBelly Reboot, Tony & I are now regular purchasers of GoodBelly StraightShots!

Backgrounder Before the GoodBelly Reboot

Going strictly dairy-free resolved MANY of my digestive issue, particularly the severe ones. But the decades of dairy assault left behind some IBS-like symptoms of irregularity. I’ve also had bacterial overgrowth found in my gut in the past. The doctors said it was likely from childhood antibiotics. Dairy caused many chronic infections for me when I was a kid (ear, nose, eyes), and consequently, I took more treatments than a little one should!

Tony has more general tummy troubles with irregular digestion, chronic bloating, and moderate diverticulosis. He’s been tested and does not have celiac disease or any other known conditions. They previously found bacterial overgrowth in his gut, presumably from the long-term antibiotics he had to take as an adult. And like me, he had an onslaught of childhood infections followed by short courses of antibiotics.

Both of us have taken different probiotics over the years, so I wasn’t expecting anything notable from the GoodBelly Reboot. Fortunately, I was wrong!

I’m not a juice drinker, so we enjoyed the oat milk-based SuperShot and StraightShot beverages over the course of our GoodBelly Reboot (and beyond!). The SuperShots have just 5 grams of sugar and a whopping 50 billions probiotic cultures. They also come in two yummy flavors: Lemon Ginger and Vanilla Chamomile. The StraightShots have just 3 grams of sugar (none added) and a mighty 20 billion probiotic cultures.

I started the GoodBelly Reboot with a daily SuperShot and had almost immediate rumbling. I was surprised since I’d never felt such action with any other probiotic brands. This one was doing something! Tony took the StraightShots and promptly got some tummy pain and bloat each day.

The grumbling persisted for me, but in a good way. My stomach wasn’t upset, it was just “busy”. Tony’s additional bloat subsided, but he could now feel some serious action.

I decided to try the SuperShot in a thick, spoonable smoothie. Enjoying it with food did reduce the rumble, and I didn’t have my usual “post-smoothie” bloat. Tony said his digestion was starting to feel more “normal” and the rumbling had almost completely subsided.

Tony decided to give the SuperShot a try and his stomach let him know that an invasion was underway. In fact, it was all out war! GoodBelly really seems to deliver on those probiotic quantity claims. I “downgraded” to a StraightShot and my tummy was happy and relatively calm.

Tony kept up with the SuperShot, encouraged by the battle ensuing. He said it didn’t seem quite as bad, but was still going strong. Smitten by the somewhat neutral flavor of the StraightShot, I began experimenting with morning smoothie flavors. And I continued to feel great after eating them.

Tony said his digestion had improved significantly. He still noticed some activity when he took a SuperShot , but his body now handled the StraightShot with ease. He even described his digestion as “very regular”, which is something he hadn’t said in years. I decided to keep up with the StraightShot for maintenance at this point. My stomach was feeling calmer and also more consistent than it had in ages.

We were both so pleased with the results that I printed out a coupon from the GoodBelly 12-Day Belly Reboot site and immediately bought three more packages! We’re working out way through those now, and plan to buy more. 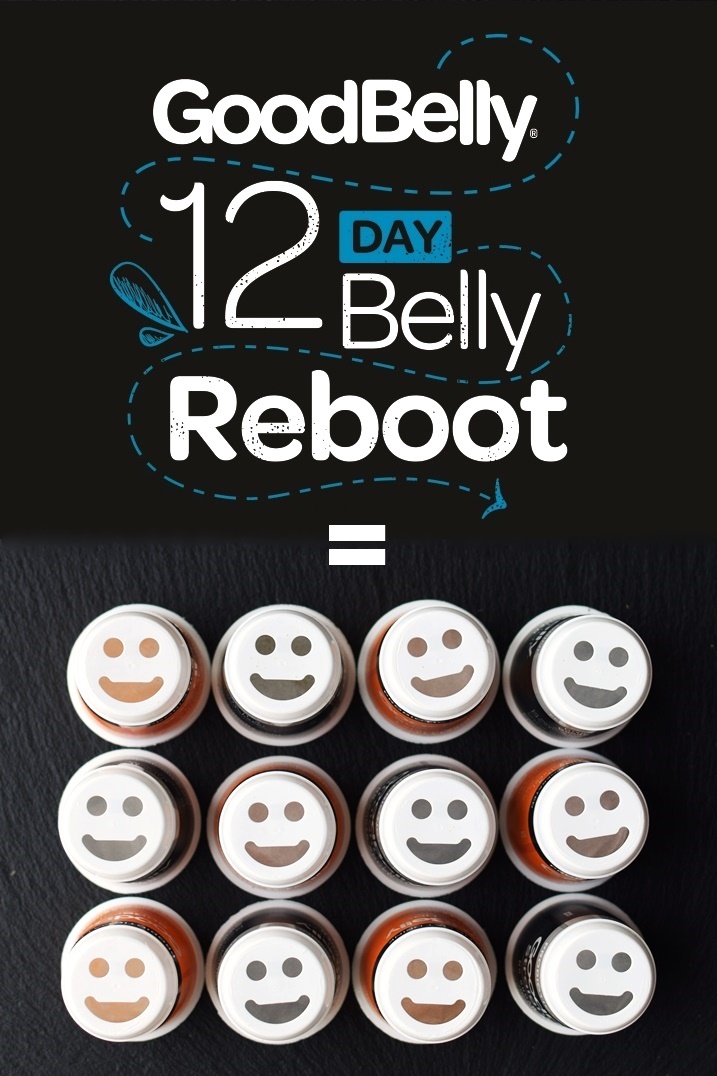 But is it Worth It Long Term?

I had it set in my head that GoodBelly was a luxury item. Although I hadn’t done the math, I assumed it was far more expensive than taking pills. You get what you pay for, right? GoodBelly is tastier and more fulfilling than taking pills, so it simply had to be a treat for the rich and famous.

But while at the store, Tony pointed out that GoodBelly was generally less expensive than equivalent probiotics! Are you telling me that a high-quality, dairy-free probiotic, which I actually remember to take because it tastes good, is the value option?! In stores and online we looked for dairy-free probiotics with equivalent levels of cultures, and indeed, GoodBelly cost less by anywhere from 25 cents to a dollar per day! Not to mention, it doubles as the creamy liquid in my smoothie, reducing my dairy-free milk beverage expense!

GoodBelly is a delicious beverage that contains exclusive live and active probiotic cultures, called Lactobacillus plantarum 299v (LP299V®). According to the research, these cultures help to improve the digestive health in your gut (where 70% of your immune system lives!) and have shown benefits in battling IBS symptoms. And unlike many probiotics, GoodBelly is dairy-free and vegan. It’s cultured on oat flour rather than dairy.

GoodBelly is available in the oat milk-based shots that we enjoyed, and in several tasty JuiceDrink varieties sold in multi-serve cartons and as concentrated PlusShots. They do have some certified gluten-free flavors in the JuiceDrink carton line-up. GoodBelly also offers some new Protein Shakes, which I can’t wait to try!

Of course you can take GoodBelly Probiotics any time, but I recommend signing up for the GoodBelly 12-Day Belly Reboot for free online. You immediately get a great printable coupon and are entered to win in their big giveaway! They also have an easy and fun online symptom tracker, and they send out motivational and informational emails for guidance. 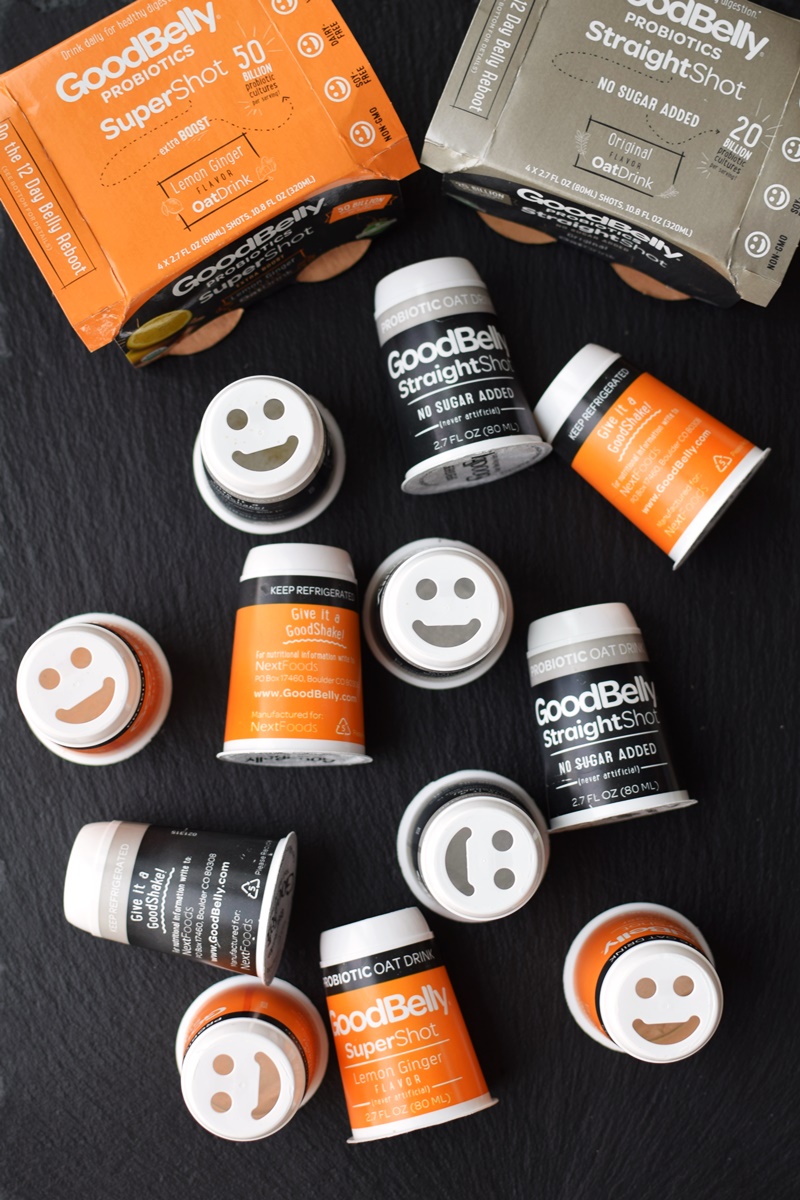