I frequently receive the question, “Is Soy Healthy?” Some readers are eager to hear the research, but many also want to know my personal stance on soy. There is a full section on this topic in my book, Go Dairy Free: The Guide and Cookbook. But I think it’s about time I address it for you online, too.

Soy foods enjoyed heightened popularity in North America during the early 2000’s, due to a rise in awareness of lactose intolerance, allergies, and chronic disease prevention. Big health claims emerged, and by 2006, the United Soybean Board announced that 82% of Americans viewed soy foods as healthy. Some even proclaimed it a “superfood”! But it seems the soybean industry over-stepped their bounds. The hype caused critics to emerge and publish entire “anti-soy” books. In the end, some of the original health claims were retracted, and consumers were left with a bad taste in their mouth. Suddenly the tables had turned and soy sales were on the decline. But as society shifted from one extreme to another, most of us didn’t buy this black and white scenario. We still wanted to know, “is soy healthy?” 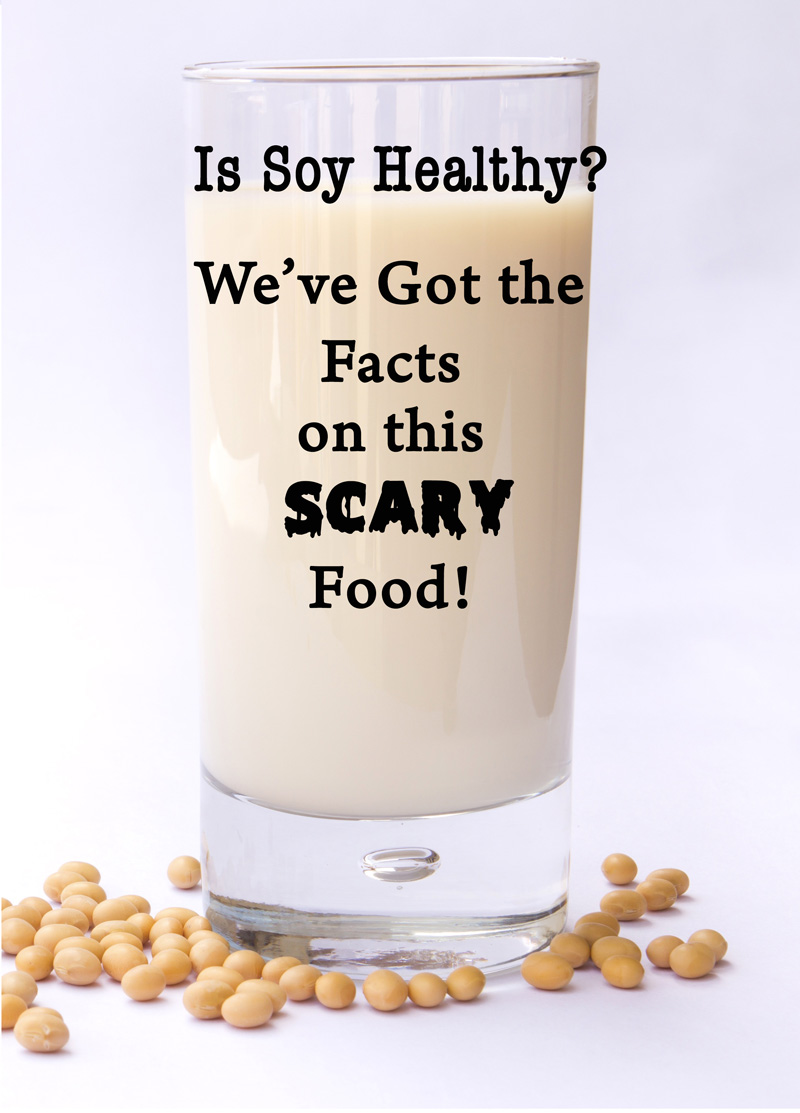 Is Soy Healthy? What Everyone Agrees Upon

Unlike most plant proteins, soy provides a complete source of dietary protein. This means it contains all of the essential amino acids all in one neat little package.

Soymilk is the only current milk alternative that competes cup for cup with dairy milk in natural protein. Other protein-rich milk alternatives are supplemented to achieve those levels. For this and other reasons, soymilk is currently the only milk alternative approved by the National School Lunch Program in the U.S.

Soy is a top allergen. Like dairy, and any other food, it is possible to be allergic to soy. Naturally, a physician will likely recommend complete avoidance if a soy allergy is suspected.

Unfortunately, this is the point where the pro-soy and anti-soy camps diverge. Every new soy study published allows one side to rise up and proclaim victory while the other goes on the defense. But as we all battle to take sides on the “is soy healthy?” debate, few question if the media is really giving us the whole soy story. 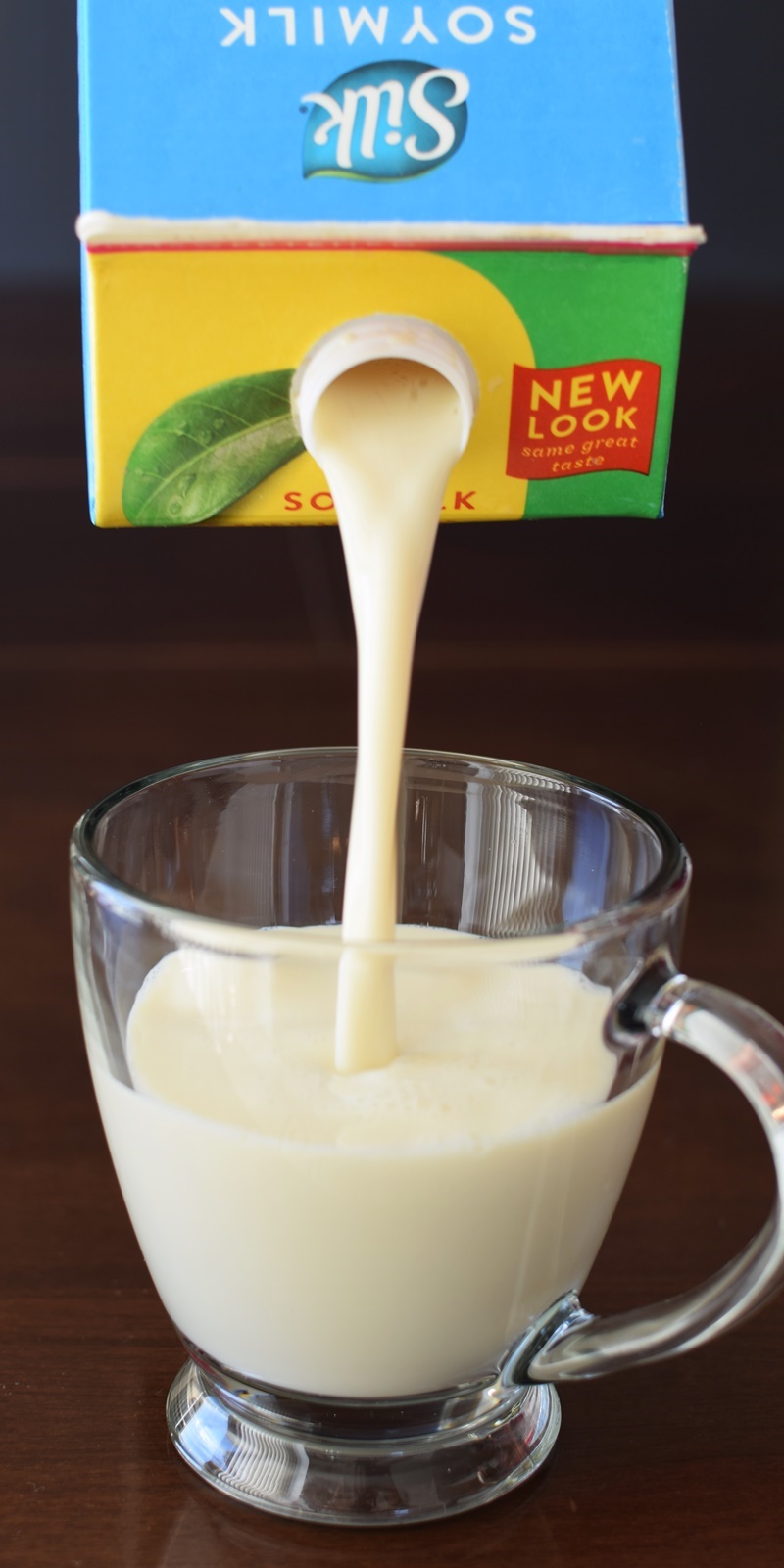 A Key Factor Behind the Hype and Anti-Hype

Many consumers don’t realize that most food studies use concentrates and powders, not whole foods. The vast majority of soy interventions studies use soy protein concentrates or isolates in high quantities. Whether the results are positive or negative, this poses two real world problems. First, by using concentrates, the study participants (often rats) are typically ingesting proportionately higher amounts of soy protein than is realistic for your average person. Second, any researcher worth their salt knows that extracting a component from it’s whole will produce different effects than the food as a whole. They are stripping away an array of naturally-occurring chemical compounds that were intended to work in unison. By using extracted concentrates or “isolates”, the soy studies are merely finding benefit or detriment for certain populations in high level “supplementation”. They are rarely looking at regular dietary consumption of the whole bean for your average consumer.

Though there are many studies that support soy as healthful, almost all of the “negative” soy studies used high levels of soy protein isolates for their research. Soy protein isolates, concentrates, or isoflavones are most commonly found in processed foods, like bars or other high-protein snacks, and supplements like protein powder and infant formula. On the contrary, whole soy foods and fermented soy foods have received a fair bit of praise from the scientific community. Whole soy-based foods may include tofu, some soymilk and soy yogurt, and edamame. More commonly found fermented soy foods include tempeh, miso, natto, and soy sauce.

But are there Health Risks?

It’s well documented that Asian cultures have been healthfully consuming soy for centuries. To quickly summarize, fermented soy foods were the “traditional” modes of consumption and are considered in most circles to be quite healthy to this day. Whole soy tofu and soymilk were later introduced, and have been linked to positive health benefits in many studies.

Although reports differ as to the “actual” amounts, most agree that Asians do consume far more dietary soy than Americans. A 2003 report from the UN Food and Agriculture Organization, estimated that on average, the Japanese eat nine times more soy protein than Europeans and North Americans.

Some of the key concerns raised about soy are related to the weak “estrogen-like” activity of soy isoflavones. And conditions like hypothyroidism and hormonal-based breast cancer are at the forefront of these conversations. Yet, on an observational basis, the rate of thyroid conditions is lower in some high-soy Asian countries than in North America. Also, breast cancer incidence is much lower in Asia. In fact, one study showed that Asian Americans, who tended to eat less soy, had a higher risk of breast cancer than their Asian counterparts. And those Asian Americans saw a decrease in breast cancer incidence when they increased their soy consumption.

This isn’t to say that soy is the magic ingredient for good health. I don’t believe any single food is. But actual studies of whole soy consumption in humans certainly aren’t prosecuting the bean either.

I’m very open about the fact that I have hypothyroidism. It appears to be genetic in my family, but has been diagnosed late in each of us since we are an active little bunch. I really didn’t want to take medication, so I did the research and tried every alternative option possible, which included going soy-free. I went strictly soy-free for a year, and remained mostly soy-free for three years (just having soy sauce or miso on occasion). My numbers didn’t budge. Not one little bit. I later discovered that the supposed links between hypothyroidism and soy were merely theoretical. And if there is a link, it is in individuals with low iodine, which is very rare in developed countries.

That said, some concerns have been raised about soy interfering with the absorption of thyroid medication. I haven’t found full confirmation of this, but as a precaution, your doctor may recommend a gap between taking thyroid medication and consuming soy.

I consider whole soy foods in moderation to be a healthy component in my diet. I do not use soy as a supplement or my primary source of protein. Rather, I enjoy a few servings of non-GMO whole soy foods per week in the following forms: 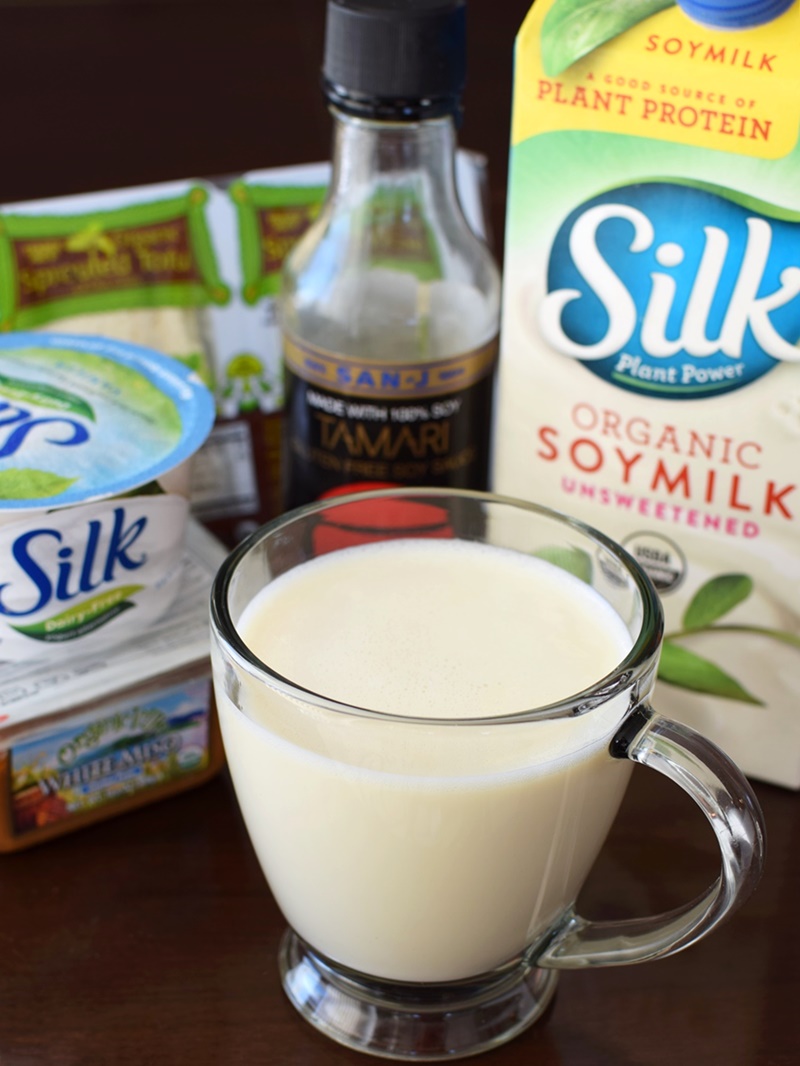 Organic / Sprouted Tofu – I love tofu. No really, I do. It isn’t something we have often, but sometimes baked or stir fried tofu makes it on the menu. When I feel like upping my health game, I pick up some tempeh. It’s more of an acquired taste, but is fermented, and therefore considered to be a very “beneficial” food in most health circles. Yes, even by many in the primal and paleo communities!

Soy Sauce – We buy wheat-free tamari or soy sauce, both of which are made from fermented soy. It’s a staple for stir-fry nights, but also comes in handy for general seasoning and Asian-inspired salad dressings.

Organic Unsweetened Soymilk – I test many recipes with coconut milk beverage to keep them top allergen-free for many viewers. But my favorite convenient milk beverages are still almond milk and soymilk. In the fall, I love unsweetened soymilk on granola. I always buy a non-GMO brand like Silk, and upgrade to their organic version when on sale.

Soy Yogurt – Tony and I have tried so many dairy-free yogurts over the years. And truth be told, non-GMO soy yogurt (made with whole soybeans) is still tops. The flavored versions are sweet, and best for dessert, but the plain offers more nutritious versatility.

Miso – This fermented paste is filled with umami flavor. It’s very salty, rich, and can season everything from stir-fries to homemade dairy-free “cheeses”. Soy-free miso pastes are available, but non-GMO or organic miso is much easier to find.

These are the personal choice “rules” that I generally follow in regards to soy. They are based on my own research and body. It is up to each individual and their physician to decide what diet is best for them. 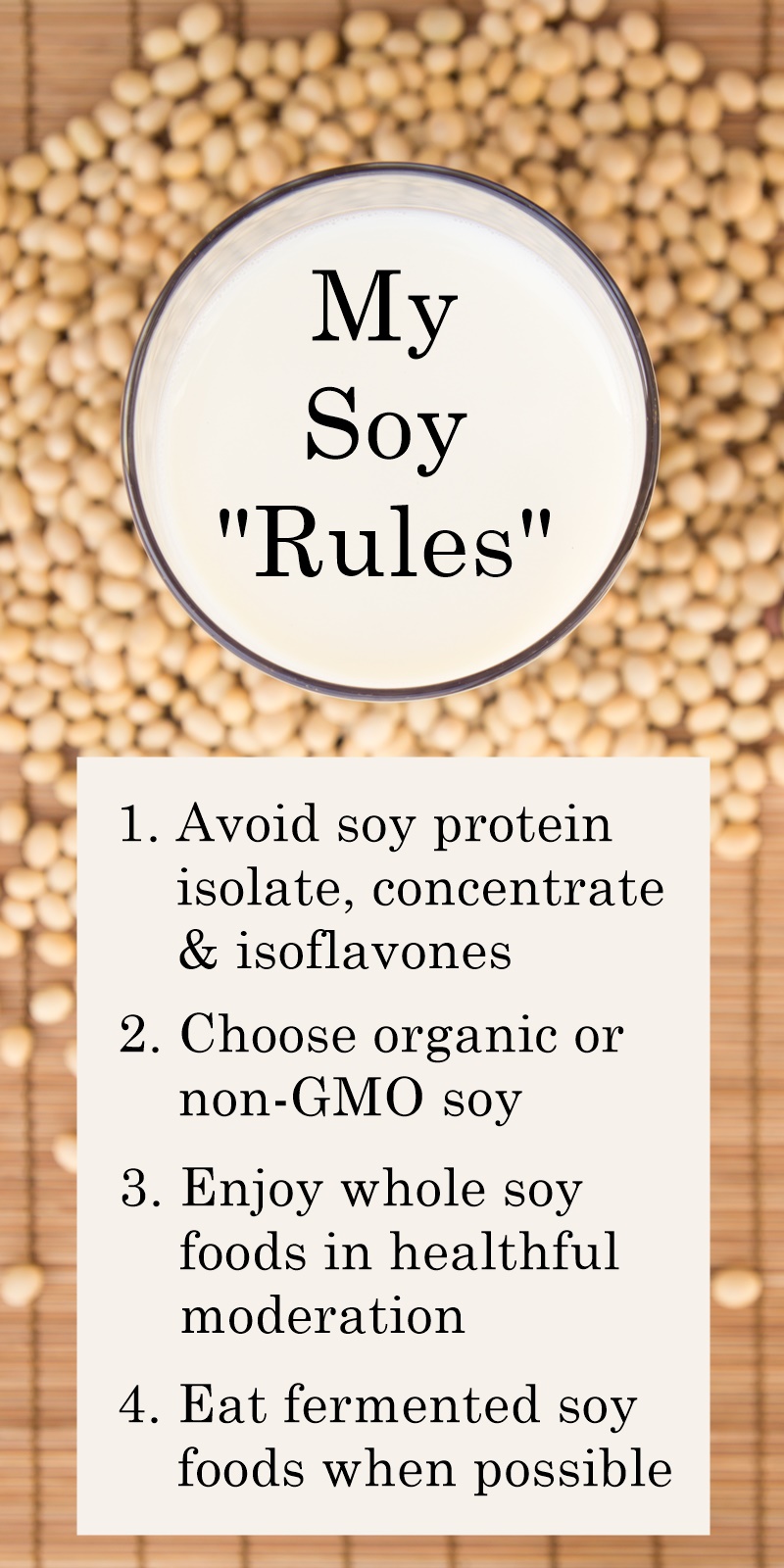 I want to thank Silk for sponsoring this post, which was all my idea. It is one that I had been wanting to write for years, but this allowed me to find the space and time. All of the opinions here are my own, and I do buy all of the specific products shown with my own money and on my own accord. This is a completely honest and forthright post based exclusively on my own personal research. The personal stances listed are 100% my own.

Please note: This article on “Is Soy Healthy?” should not be construed in any way as dietary or medical advice. It is for informational purposes only. Always consult a physician before making any changes in diet.