Unfortunately, all varieties of New Morning Organic Oatios were discontinued. For other options, see our Dairy-Free Cereal Reviews.

If you are one of those people who doesn’t feel satisfied without a nice full bowl of cereal (guilty), but would rather not have the corresponding jumbo calorie load or a bloated morning belly, then this is your cereal. 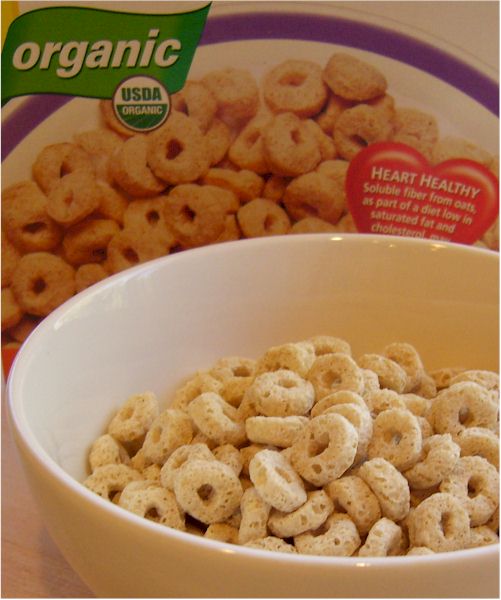 Oatios are 100% whole grain – made with organic versions of whole oat flour (just ground oats), brown rice flour, and oat bran – offering up a decent little fiber load. But rather than trying to “compensate” for the health factor of this cereal, New Morning has kept the sugars low, at just 2 grams per 1 cup serving. Overall, you are just looking at 110 calories, 2g of fat, 22g of carbs, and 5g of protein (yes, whole grains do have a good amount of protein!) per 1 cup serving. Yes, that is a full 1 cup serving, not 1/3 cup, not ½ cup, 1 nice-sized cup!

In fact, I enjoyed a nice big bowl for breakfast, filled with 1.5 cups of Oatios, half of a large banana (sliced of course), a few generous shakes of cinnamon, and some unsweetened So Delicious milk … and I felt great afterward. It was a nice filling breakfast that didn’t weigh me down in the least bit and came in at just around 300 calories!

I enjoyed the flavor of the Original Oatios, which was mild and light, not sweet, but not bitter either. These O’s seemed lighter and puffier than the O’s of my childhood, but were an equally satisfying grown-up version. Since they weren’t sweet, my husband did add a bit of brown sugar to his bowl, but I found the banana and cinnamon added the perfect sweetness.

My only complaint was they definitely don’t stand up in milk for very long. In the time it took me to take a picture or two … 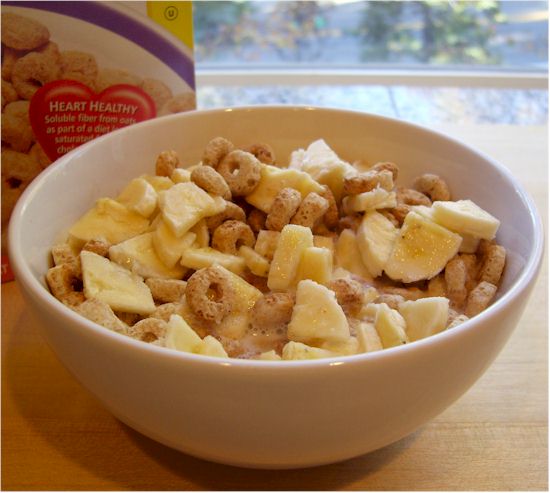 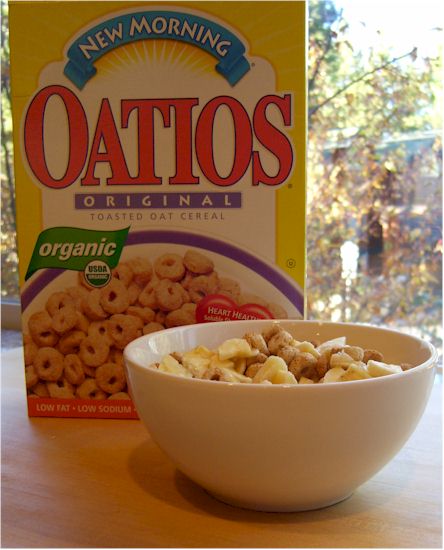 … the submerged O’s did become a wee bit soggy. So I might suggest pouring in a bit, and refilling as you eat, should you like your cereal nice and crisp. Of course, water-logged or not … I devoured every last morsel!

If you are like my husband and you prefer a slightly sweeter cereal, Oatios also come in two other flavors: Apple Cinnamon and Fruit-e-O’s. Keep in mind, even these naturally flavored versions are still lower in sugar (and richer in whole grains) than the competitors!

For more information on this product, see the U.S. Mills Website (the makers of New Morning products).