I’ve trialed many recipes from the cookbook American Vegan Kitchen, by Tamasin Noyes – the Fettuccine Alfredo was so creamy and the Coconut ‘Bacon’ Bits were sheer genius! But the recipe that I go back to time and time again, from this nouveau bistro meets greasy spoon diner collection, is the Smokin’ BBQ Portobello Sandwiches. 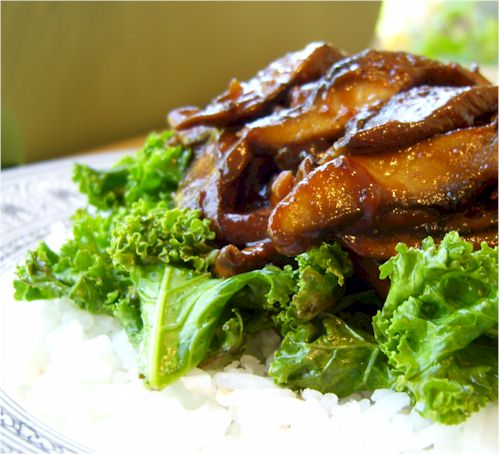 I LOVE barbecue sauce, and the ability to make my own at home with such ease, is simply too wonderful.

When I first made and photographed this recipe, I didn’t have any buns, so I actually sauteed some kale, placed it on top of some leftover rice, and finished the dish with the smothered mushrooms. It was so bold, flavorful, and downright barbecue-y.

If you want to make these portobello sandwiches backyard barbecue-style, I see no reason why you couldn’t grill some whole portobellos and then slather them with the Q-sauce. Just don’t skip that barbecue sauce! Both my husband and I loved it.

Speaking of the sauce … it is SPICY! We are a bit heat timid around here. If you have sensitive taste buds, too, I recommend cutting the chipotle amount in half and reducing the chipotle chili powder to 1/2 teaspoon..