I’ve really been loving experimenting with gluten-free and even grain-free, but since my husband is egg-free, I find myself limited in what recipes I can try. Note, lack of gluten + lack of eggs + lack of oxygen = numerous baked good failures.  But all is not lost. I have had some successful experiments, and I have certainly found at least a few recipes to learn from. My favorite recent find was Kelly’s new cookbook, Grain-Free Baked Goods and Desserts: Gluten-Free, Casein-Free, and Often Egg-Free. I would say that a little over half of the recipes call for eggs, but some don’t … and those my friends, are true gems. Such as these Red Rock Grain-Free Bread Rolls!

I made her version of Grain-Free Bread Rolls and they were such a hit, that I decided to bake up a second batch soon after. This time adding a touch of cinnamon and some raisins. Just guessing here, but I think Kelly calls them Red Rock Rolls, because they turn this amazing red-orange color on the outside when they bake. They are seriously scrumptious. They have a hearty, slightly nutty flavor and such a pleasant texture. 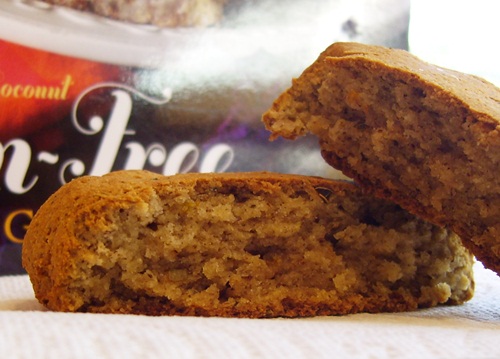