At last check, Lyfe Kitchen just had a dozen or so locations scattered about the U.S. (mostly in major metropolitin areas). But considering that this healthy fast food concept includes a founding team with two former McDonald’s executives (the Chief Operating and Chief Communications Officers), I have a feeling expansion will continue.

Unlike their prior big corp work, Mike Roberts and Mike Donahue are focused firmly on nutrition and sustainability with Lyfe Kitchen. Their menu was created by world class natural food chefs (including vegan chef Tal Ronnen) to ensure the use of whole foods and local sourcing, whenever possible.

The menu at Lyfe Kitchen specifically labels which items are gluten-free, vegan & vegetarian, and/or contain nuts. I wish they labeled the items that are “just” dairy-free as there appear to be many (they do have chicken and fish entrees), but beggars can’t be choosers. Some of Lyfe Kitchen’s most popular vegan menu items include Edamame Hummus and Veggies (pictured below), Sweet Corn Chowder (with cashew cream!), Quinoa Crunch Wrap, Thai Curry Bowl, and Budino desserts (chocolate and banana).

See their website below for locations, phone numbers, hours, and their full menu. 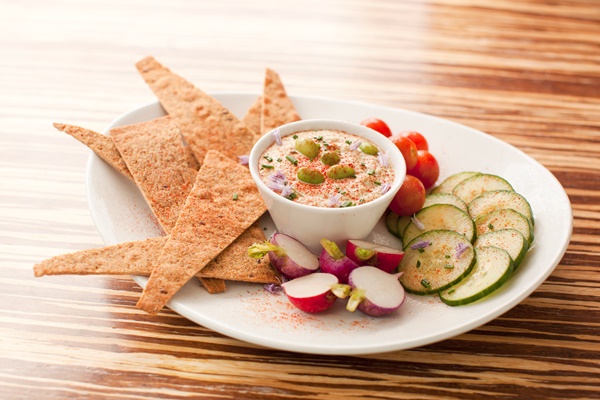